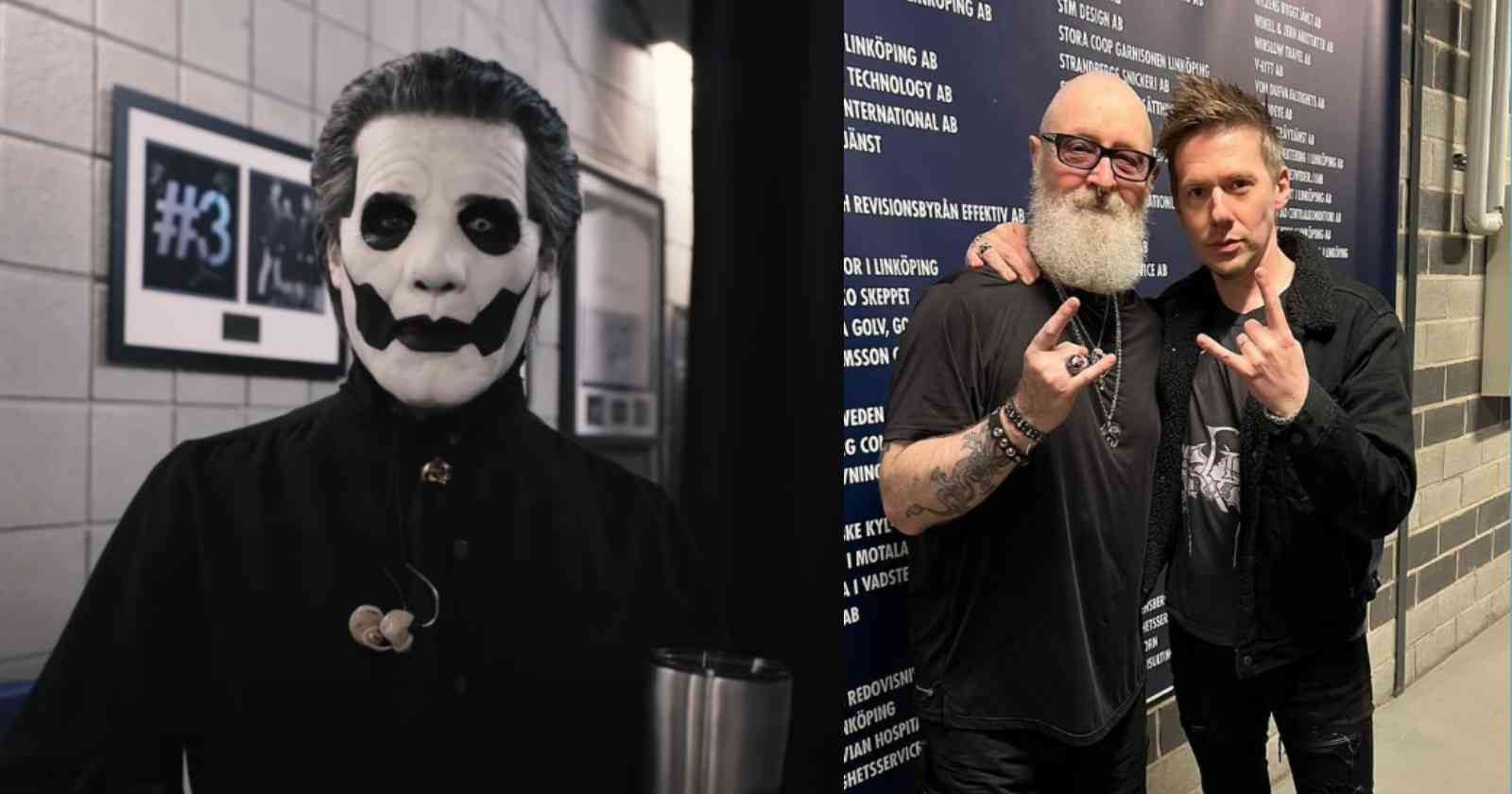 Formed in Sweden back in 2006, Ghost became in the last decade one of the most successful new bands in Rock and Roll music. Mixing Rock, Pop and Heavy Metal often with satanic imagery and lyrics, the band gained millions of fans worldwide, including many famous ones. Rock and Roll Garage selected the 7 legendary musicians who talked over the years about Ghost and their music.

Ghost already released 5 acclaimed studio albums and their audience continues to grow. They also won the Grammy in 2016 for Best Metal Performance.

The 7 legendary Rock musicians who gave their opinion on Ghost

The Metallica members are some of the biggest famous fans of Ghost and their even took them on tour several times as their opening act. They have also invited the group to cover “Enter Sandman” for the “Black Album” tribute record that was released in 2021.

Metallica’s James Hetfield is a big fan of the band since the early days. In an interview with SVT (Transcribed by Rock and Roll Garage) back in 2011, when Ghost had only one album out, James Hetfield already was declaring his love for the band.

“I had no idea what they looked like until I saw the video. I heard the music first and thought it was very great. Very unique, very melodic and a breath of fresh air for Metal. Remind me a little bit of 70s kind of Rock that I liked as well. So yeah, I love the band,” James Hetfield said. The musician even played Ghost’s “Cirice” riffs during a rehearsal a few years ago.

A few years later in 2019, Metallica’s guitarist Kirk Hammett also praised the band, sitting next to Ghost’s leader Tobias Forge. In an interview on Metallica’s official Youtube channel, both musicians talked about touring together and Hammett. “It’s our honor (To have Ghost as special guest on the tour), it really is. I mean, we are all big Ghost fans. We want to put on the best possible show for our fans and it means bringing out the best possible bands we can to play with us.

“We feel it’s important to put out a very, like, well-rounded show that offers a lot of different stuff. You guys (Ghost), your music and your show just offer so much of a different sort of thing that we do, that I think it works out really really well,” Kirk Hammett said.

The Metallica drummer Lars Ulrich also praised Ghost in 2019 in a conversation with Kerrang!  “To me, Tobias is a super-cool dude. I really like his energy and being around him. Everybody in our band is a huge fan of Ghost. It seems like the fans of our band love them too. With support bands, we always try to take out people we like to be around and get along with. We’re looking forward to our whole jaunt with them,” Lars Ulrich said.

Another big fan of Ghost is the Metal God himself, Judas Priest‘s vocalist Rob Halford as he revealed in an interview with Chaoszine in 2022. The British singer commented on Ghost’s most recent album “Imperia” (2022) and said he was proud of what Tobias Forge have done so far.

“I’m so happy for Tobias, to see his ambition and his dreams become so real. He’s worked really hard to make Ghost into this worldwide experience, you know? And the guy’s a great talent, fantastic performer on stage. Songwriting… the records are wonderful. I’ve been following his career since way back.”

Rob Halford have already said that he and Tobias once talked about maybe collaborating in the future and both were really excited about the idea.

One of the reasons why many Heavy Metal don’t like Ghost it’s because many songs of the group have a pop approach and Tobias Forge even revealed during the release of the album “Imperia” (2022) that Def Leppard, that often mixes Hard Rock with Pop is a big influence to his songwriting. It turns out that the band’s vocalist Joe Elliott and guitarist Phil Collen are big fans of the Swedish group.

In a conversation with Metal Hammer Def Leppard’s Joe Elliott revealed that it was the guitarist Phil Collen who first presented him to the group’s music and ever since he has been a fan. “Phil (Collen) introduced me to them. He said, ‘Here, have you heard about this band Ghost? It’s like this kind of Scando goth-metal but with brilliant melodies.’ I went, ‘Well, that’s an oxymoron. Cos it’s usually [makes unintelligible singing noise like someone vomiting in a bucket].’ But he played me something. A couple of minutes each of a few songs.”

“I was really intrigued. So I asked him to Dropbox me the new album (Imperia – 2022). I listened to it all, and I thought it was absolutely stunning. It’s like a whole new genre of music. So It’s way more Toto than death metal or any of that stuff. It’s like the song ‘Spillways’. It starts off like ‘Hold The Line’ by Toto or ‘Jane’ by Jefferson Starship. One of those classic 70s songs that begin on the piano before these big, chunky chords come in,” Joe Elliott said.

The musician said in the same interview that the new Ghost record was is his “got-to album” during the last weeks. He even downloaded the record onto his Apple Watch, that according to him has only a few albums. He also compared the intro track of the album “Imperium” to what bands like Metallica and Thin Lizzy already did on some of their classic albums.

It’s not only the virtuoso guitarist Steve Vai is also new fan of Ghost, but his entire family as he revealed in an interview with Classic Rock in 2022. The musician said that his wife and kids are really close and when they discover new bands and albums they become special for them. When asked which song he would choose to be played at his own funeral, Steve Vai said it could be a Ghost record.

“Me, my wife and boys, they’re twenty-nine and thirty-two now. We’re a really close family, and sometimes we discover records and the songs go into a different realm. They become ‘special to the family’. Over the last year we’ve adopted the band Ghost. Tobias, there’s another guy who’s really connected. So if you come to my funeral you might hear a Ghost record,” Steve Vai said.