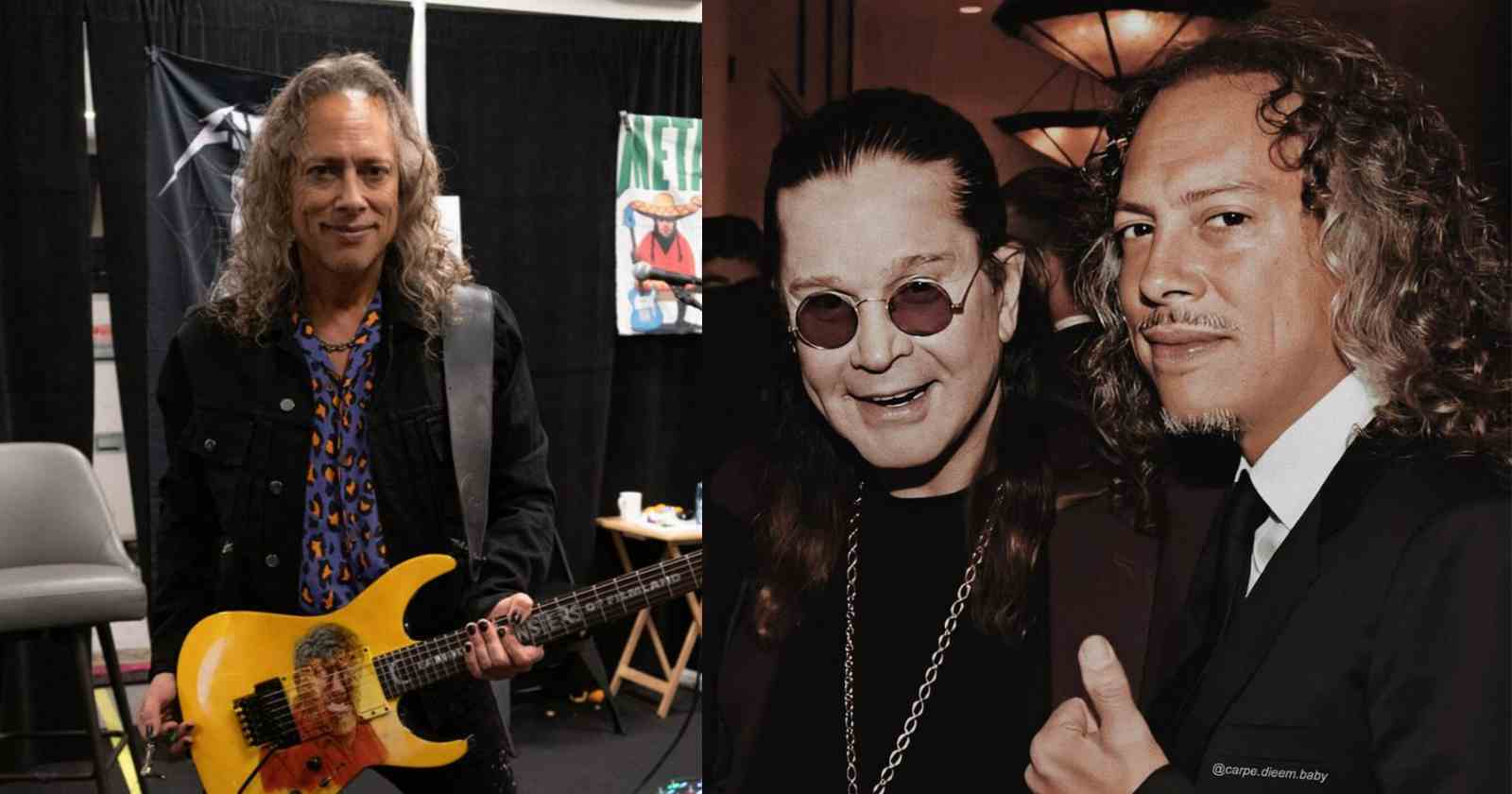 Metallica guitarist, Kirk Hammett listed in an interview with Pop! Talk the 7 lead singers that he thinks are some of the best of all time and Rock and Roll Garage selected what the musician said about them over the decades and his connection with some of them.

Considered one of the best guitar players in Heavy Metal music, Kirk Hammett was inducted into the Rock and Roll Hall Of Fame as a member of Metallica back in 2009.

The legendary Deep Purple vocalist Ian Gillan, who also fronted Black Sabbath on one studio album, is one of the most remembered vocalists in the history of Rock and Roll. Kirk Hammett has always been a big fan of the British group and talked about their induction into the Rock and Roll Hall Of Fame in an interview with Artisan News back in 2012 (Transcribed by Rock and Roll Garage): “I’ve been lobbying for Deep Purple for a long, long, long time.”

Over the years Hammett even said that when he came up with the guitar riff for Metallica’s most famous song “Enter Sandman”, he was trying to compose their “Smoke On The Water”. His bandmate, Metallica drummer Lars Ulrich was the responsible to induct the influential British band into the Rock and Roll Hall Of Fame back in 2016.

Nicknamed the “Golden God”, Robert Plant was the voice of Led Zeppelin and inspired a whole generation of Rock and Roll singers that heard the legendary albums of the group. In a conversation with Artisan News back in 2012 (Transcribed by Rock and Roll Garage) at the premiere of Zeppelin’s movie “Celebration Day”, Hammett shared his love for the band, saying: “The soundtrack of my youth. They are pretty much like the first band that I actually sat down with a guitar and tried to learn guitar solos, the songs.”

“I cannot say enough about Led Zeppelin and the impact that they had on me and my musical career. So Jimmy Page is one of my heroes for years and years and years. He was the man, he was all encompassing, he is a brilliant songwriter, brilliant producer, brilliant showman. I mean, he had it all. Also, he had a great tone, great attitude. What’s not to like about Led Zeppelin? He (Page) is such a big influence on my life,” Kirk Hammett said.

One of the most remembered vocalists in Heavy Metal due to his powerful voice, performance and lyrics, Ronnie James Dio fronted Ritchie Blackmore’s Rainbow, helped Black Sabbath to continue after he replaced Ozzy Osbourne and then created Dio, his own successful group. 4 years after Dio’s death Metallica was part of the tribute album “Ronnie James Dio – This Is Your Life”. They recorded what was called the “Ronnie Rising Medley”, that was a song that mixed “A Light in the Black”, “Tarot Woman”, “Stargazer” and “Kill the King”.

Hammett recalled in an interview with Rolling Stone back in 2012 that Dio was one of the first Rock stars that he ever met face to face: “We played a show in 1984 with Ozzy, Dio, Gary Moore, that band No Heavy Petting, maybe Virgin Steele. It was in Paris, the Breaking Sound Festival. We called it the Breaking Wind Festival.”

“I can remember being backstage and freaking out because there’s Gary Moore! We went into his dressing room. So I could hear him warming up on a little practice amp. My jaw dropped as he was ripping these licks off. He only warmed up for five minutes, then came out and looked at me as he walked to the stage. I was like, “Woah!” I jumped.”

The first voice of Heavy Metal music, since Black Sabbath created the genre, Ozzy Osbourne was a vocalist that especially Heavy Metal musicians heard a lot during their youth. The musician shared in an interview with Invisble Oranges back in 2014, his love for Sabbath recalling his reaction when he first heard the group: “The very first time I heard Black Sabbath it spoke to me beyond just music.”

“I thought to myself, ‘Oh my god, these are horror movies put into songs.’ I’ll never forget the first time I actually heard Black Sabbath. It was around a campfire while we were camping. It was really dark that night. The campfire was really the only light and we were listening to the Paranoid album. I was hearing it for the first time. So I actually got scared [laughs]. I was about thirteen years old. Then I thought, ‘This is the music for me.'”

Metallica covered Sabbath’s “Sabbra Cadabra” on their 1998 covers album “Garage Inc.” Kirk’s bandmates Lars Ulrich and James Hetfield were the ones that inducted the legendary British band into the Rock and Roll Hall Of Fame back in 2006.

Also called “The Metal God”, Rob Halford is known for his incredible voice range and as Judas Priest‘s most famous vocalist. Hammett is a big fan of the British Metal group and even had the chance to play with them live in 2021. He joined the band on stage during their show in Louisville, Kentucky. They played “The Green Manalishi (With The Two Pronged Crown)”, famous Judas cover from the Fleetwood Mac song.

With more than 50 million records sold worldwide, Judas Priest remains as one of the most influential Heavy Metal bands in history.

The only Punk Rock vocalist on Hammett’s list, Joe Strummer made history as the singer and guitarist of The Clash, not only because of his vocals but also due to the incredible lyrics he composed. During the interview with Pop! Talk, where the musician listed the singers, he talked about Strummer, saying (Transcribed by Rock and Roll Garage): “In the other hand, Joe Strummer has the best voice in the world, you know. (He was) a guy that could sing anything and he would make it great. He could sing so horraciously out of key and you would be just loving it, you know,”.

The Clash was one of the few Punk bands that also used in their music influences from genres that weren’t much used in Rock music like Reggae, Dub, Funk and Ska.

Another important vocalist for Rock music, Paul Rodgers was the voice of Free and Bad Company. He also was involved in two supergroups. One was The Firm, which had Jimmy Page as the guitarist. The other was his project with Queen, that was called Queen + Paul Rodgers, where they even released new songs as a group.

He still wasn’t inducted into the Rock and Roll Hall Of Fame as solo artist or as a member of Free and Bad Company.