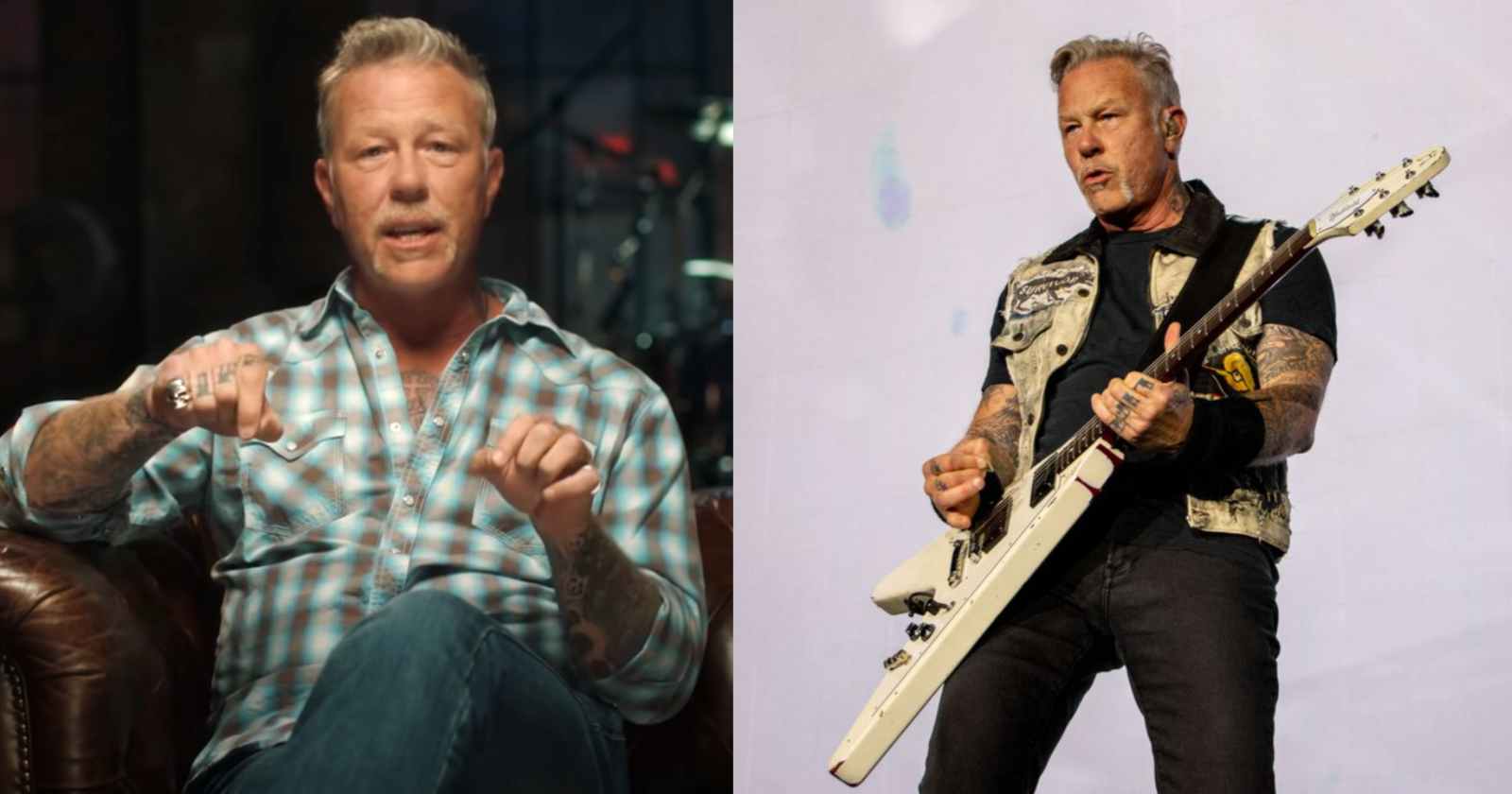 Singer and guitarist James Hetfield co-founded Metallica in 1981 and helped the band to become one of the most influential of all time. The group was not only an important part of Thrash Metal but of Heavy Metal music in general over the decades. But before becoming a rock star, Hetfield was an aspiring musician and big fan of music. In an interview made available by the Clip ‘Em All Youtube channel in 2022 he talked about how music is important in people’s lives. Also how they tend to be connected to problems, happy moments or achievements that people lived.

He said that every person have some special songs that makes them go way back to those memories. For his wife, for an example is Phil Collins’ music. He listed 5 bands that cause that in him and that he likes to listen to. So Rock and Roll Garage selected what the musician said about those artists over the years and his connection with some of them.

Not a surprise that James Hetfield is a big fan of Black Sabbath, since the band simply created Heavy Metal music and influenced almost every band of the genre, including Metallica. Talking with the San Jose Sharks back in 2015 (Transcribed by Rock and Roll Garage), the musician and his bandmate, the drummer Lars Ulrich revealed which were their favorite bands of all time. Hetfield picked Sabbath, saying: “(All time favorite) band is hard because there is so many. Led Zeppelin is in there, Motörhead, boy… they all offer a little bit different. But if I was stuck for one: Black Sabbath”.

The two Metallica musicians were lucky enough to be the ones who inducted the influential British band into the Rock and Roll Hall of Fame back in 2006. Hetfield recalled in his speech that everything changed in his life when he was hearing his older brother record collection and he came across Black Sabbath’s self-titled debut album. He instantly was afraid of what he was hearing but he also felt that he loved that. “Picture a 9 year-old boy, quiet, well behaved on the outside. But on the inside boiling and dying for life to burst open with any sort of stimulation. The discovery of music was what was to burst it wide open. But not just any music. This was more than just music. (It was) a powerful loud heavy sound that moved his soul,” James Hetfield said.

The most famous band labeled as Southern Rock, Lynyrd Skynyrd is also one of Hetfield’s favorite bands and he even listed the classic track “Free Bird” as one of his favorites of all time when he talked to Rolling Stone back in 2004. “Nothing tops this workingman’s ballad. ‘Free Bird’ fit my life for the first 20 years on the road. Not really getting too attached to stuff, living life for the moment and moving on,” James Hetfield said.

Metallica covered the Skynyrd song “Tuesday’s Gone” on their 1998 covers album “Garage Inc.,” something that shows they were an influence for the band in the early days. They even played the track live with Gary Rossington, the surviving member of the original band.

Dave Mustaine, the ex-member of the band and leader of Megadeth revealed in an interview with Eddie Trunk back in 2018 (Transcribed by Rock and Roll Garage) that there was an early Metallica song that was inspired by the Southern Rock group.

“Cliff (Burton) was a really wonderful human being. We used to ride to rehearsal together. I remember this one story in particular, we were smoking some really terrible pot. It was a homegrown. So it was really awful. We were listening to Lynyrd Skynyrd, because Cliff loved Lynyrd Skynyrd.”

“I like them but not as much as he did because he listened to everyday on the way to rehearsal. So one day we get to rehearse and we are playing the song the song ‘Mechanix’, which had been changed into ‘The Four Horsemen’ (Metallica). I’ll tell you why. So we get there and Lars says: ‘Oh f*ck man, we need to slow this song down a little bit’ and I went: ‘Really?’. Because we’re supposed to be fast, loud and rude. Right?”

“So I pick up my guitar and I go and play the ‘Sweet Home Alabama’ riff. Now, go back and listen to ‘The Four Horsemen’ again. So I played that riff in the middle and Lars goes ‘Wow, f*ck man. That’s f*cking brilliant man’. That’s the difference between ‘The Four Horsemen’ and ‘Mechanix’. Is the bastardized version of Lynyrd Skynyrd thanks to Cliff,” Dave Mustaine said.

James Hetfield also loves UFO, the British Hard Rock band famous especially for having members like Phil Mogg (Vocals), Pete Way (Bass) and Michael Schenker (Guitar). Talking with Colombian radio station Radioacktiva in 2016, the Metallica frontman listed UFO as one of his favorite groups of all time. The band is also one of the reasons why he wanted to play a Flying V guitar model.

He revealed that talking with Guitar World back in 2018: “I got my white V in 1980. It was the second guitar I ever owned. And I probably bought it for $200. So I knew it was a copy. But we treated it as a real Gibson. I wanted a white one because Michael Schenker of UFO had one. So I needed one too.”

Formed in London back in 1968, UFO released 22 studio albums. Some of their classic are “Doctor, Doctor”, “Rock Bottom”, “Mother Mary”, “Too Hot To Handle” and “Only You Can Rock Me”.

Metallica was heavily influenced by the New Wave Of The British Heavy Metal, that happened from the mid-70s until the early 80s and Judas Priest was one of the main bands of that movement. The members of both bands are good friends and they have played with each other over the decades. Priest’s vocalist Rob Halford sang many times the song “Rapid Fire” with Metallica on stage. In 2021 guitarist Kirk Hammett played “The Green Manalishi (With The Two Pronged Crown)” with Judas during their concert.

Antoher important band from the New Wave Of The British Heavy Metal, Iron Maiden released their self-titled debut album in 1980 and the follow-up “Killers” in 1981. Both records had Paul Di’Anno as the band’s vocalist, who later left the band being replaced by Bruce Dickinson.

James Hetfield prefers the band era with Di’Anno, since he credited those early Iron Maiden albums as big influences over the years. Talking with the Colombian radio station Radioacktiva in 2016 (Transcribed by Rock and Roll Garage), the musician talked about those records, saying: “Early Iron Maiden albums. I love the new wave of the British Heavy Metal. That makes me feel good. It reminds me of youth”. He even listed when asked by Rolling Stone back in 2008, Paul Di’Anno as one of the best vocalists of all time in his opinion.

In a video posted on Metallica’s official Youtube channel back in 2016 (Transcribed by Rock and Roll Garage), James Hetfield shared some of his memories of going to record stores and one of them was buying those Maiden albums. “I bought this (Maiden’s debut album) just because of this (the cover), because look at that! Why would you not buy this? That dude look really menacing and evil. I bought that and I had never even heard of them. So I bought it, put it on and I’m glad I did. Because it was a really was a big inspiration for me in the early days,” James Hetfield said.