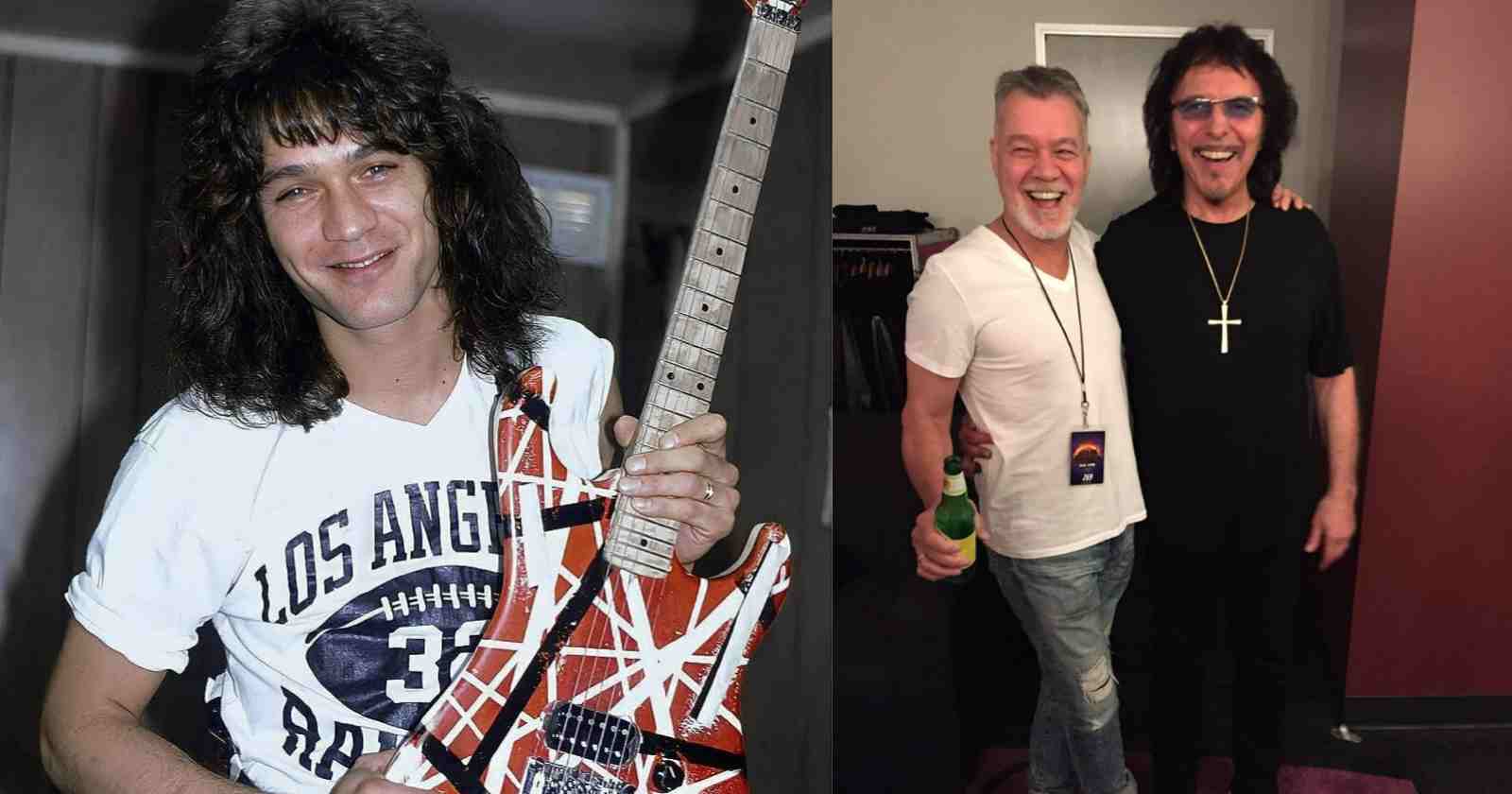 After Van Halen released their self-titled debut album in 1978, the guitar in Hard Rock and Heavy Metal music was never the same again. The incredible and innovative style of Eddie Van Halen was a huge influence to guitarists, being copied and transformed throughout the 80s.

Until the musician’s death in 2020 at the age of 65, they released 12 studio albums that made them one of the best-selling bands of all time. They have sold an estimated amount of more than 80 million records worldwide.

Even though the guitarist had an unique technique and style, that for many people is something that can’t be reproduced, he was influenced by many other bands and also had a broad musical taste. To show a little bit more about what he liked, Rock and Roll Garage selected the 7 bands that Eddie Van Halen loved and what he said about them over the decacades.

AC/DC was one of the bands that Eddie Van Halen loved the most and one of their songs even influenced a Van Halen track. The guitarist revealed in an interview with Guitar World back in 2014 that “Drop Dead Legs” from the “1984” album was inspired by AC/DC’s “Back In Black”.

“That was inspired by AC/DC’s ‘Back in Black’. I was grooving on that beat. Although I think that ‘Drop Dead Legs’ is slower. Whatever I listen to somehow is filtered through me and comes out differently. So ‘Drop Dead Legs’ is almost a jazz version of Back in Black. The descending progression is similar. But I put a lot more notes in there,” Eddie Van Halen said.

Even though he said ‘Back In Black’ was an inspiration, Eddie Van Halen had other favorite tracks. As AC/DC’s guitarist and co-founder Angus Young said in a conversation with Forbes back in 2020, Van Halen loved the album “Powerage” (1978) and two of his favorite songs from the band were “Down Payment Blues” and “Riff Raff”.

“I remember that time because Eddie liked hanging out with Mal and Brian and Cliff (When Van Halen was AC/DC’s opening act in the early days). They liked going out and having a drink in the bar and stuff.”

“But Malcolm used to say, ‘Eddie keeps going to me all the time, ‘You gonna do ‘Down Payment Blues’? He loved that song. In fact the last time I saw him was when we were touring. Brian said, ‘Come down to the shows.’ And that is the first thing he said, ‘You gotta do ‘Down Payment Blues?” He liked a lot of, ‘Riff Raff’ and tracks like that,” Angus Young said.

As Angus Young said, Eddie loved “Down Payment Blues” and he even listed in an interview with Billboard in 2015 the riff of that song as one of his favorites of all time.

“One of my all-time favorite AC/DC songs of an album called ‘Powerage’. Just the power. The sheer… it’s just engulf you. You just feel it. It makes you vibrate,” Eddie Van Halen said.

Another heavy band that Eddie Van Halen loved is Black Sabbath and his band almost had a different name because the group considered to use “Rat Salad”, the same name of the Sabbath instrumental track from their second album “Paranoid” (1970). In the early days, the American group used to cover many songs from the British Heavy Metal band in the bar circuit and Eddie even sang on some occasions.

“Into The Void” was his favorite one from the band. He also told Billboard, that is one fo the riffs he liked the most. Curiously, he played the riff the wrong way as Iommi recalled in a conversation at Whitley Bay Film Festival in 2018.

“He said, ‘I’ve been playing it like this all these years. And, of course, I showed him how to play it. I didn’t ask him how he played any of his. Because I wouldn’t be able to do it. [Laughs]” Tony Iommi said.

As AC/DC, Van Halen also was Black Sabbath’s opening act back in the late 70s. It was the first time that the members of both bands had the opportunity to meet each other. Van Halen and Iommi remained friends over the decades and went to see each other’s concerts.

When Sabbath was recording their 1994 album “Cross Purposes”, Iommi even invited Eddie to play the solo in one track called “Evil Eye”. But the British guitarist said that he had to change the solo afterwards.

“One of his favorites was ‘Into the Void,’ strangely enough. We played that and we went back to writing. I think it was “Evil Eye.” I said, ‘Go on, you play the solo on this.’ He did and it was really great. When we recorded it, of course, I tried to duplicate that. But I couldn’t [laughs],” Tony Iommi told Rolling Stone in 2020.

One of the artists that many fans probably would never imagine that Eddie Van Halen was a fan is the ex-Genesis vocalist Peter Gabriel. He even listed in an interview with Guitar Tricks Insider in 2016 the album “So” from 1986 as one of his favorites of all time. That record has classics like “Red Rain”, “Sledgehammer” and “In Your Eyes”.

Wolfgang Van Halen, Eddie’s son, who is a multi-instrumentalist and singer, already said that besides AC/DC, Peter Gabriel was the other artist that he and his father really loved. He recalled in a conversation with Classic Rock in 2022, the first time that his father showed him the track “Red Rain”.

“I’ll never forget him coming up to me one night with these huge headphones and going, ‘Wolf, put these one.’ He put the headphones on my head and cranked the first song ‘Red Rain’.”

“The soundscape of it is incredible. Everybody should do that at least once in their life. Put an amazing pair of headphones on and crank Red Rain. It’s very hard to listen to now my father is gone. But that album front to back is Peter Gabriel at his finest,” Wolfgang Van Halen said.

One of the bands that influenced Eddie Van Halen the most in the early days was the British supergroup Cream, formed by Eric Clapton, Ginger Baker and Jack Bruce. In the interview with Guitar Tricks Insider magazine in 2016, he listed the albums “Wheels Of Fire” (1968) and “Goodbye” (1969) as two of his favorites of all time.

The musician talked in an interview with Rolling Stone in 2011 about the influence of Eric Clapton’s playing in his style and his love for the band.

“Actually after Cream I dug back a little bit to the Bluesbreakers stuff. But my favorite stuff was when he was in Cream. Which was only a couple, three years. It wasn’t a very long run. But what I really liked was their live stuff, like ‘Wheels of Fire’ and ‘Goodbye’. ‘Cream’ and stuff like that. Because then you could really hear the three guys playing in their live element,” Eddie Van Halen said.

In the early days of Van Halen, in the early 80s, Eddie told Guitar World magazine that he knew every note that Clapton had played in his career. He also stated that Cream’s version for “Crossroads” was one of the “best live recorded songs of all time”.

Another British band that Eddie Van Halen liked was Deep Purple and there are many videos of him warming up playing riffs from songs like “Hard Lovin’ Man”, “Speed King” and “Space Truckin'”.

He told Billboard in 2015, that the riff of Deep Purple’s “Burn” as one of his favorites of all time. Talking with Rolling Stone in 2011 he revealed that he liked the vibrato bar used by the classic Deep Purple guitarist Ritchie Blackmore.

“Ritchie Blackmore I liked because of his vibrato bar use on ‘Deep Purple in Rock’ (1970). Also, they come out with great riffs. I mean, come on, ‘Smoke on the Water’ is one for the history books.”

The first time he met Ritchie Blackmore was weird

The legendary keyboardist Don Airey, who is now a member of Deep Purple, played during the 70s and 80s in Ritchie Blackmore‘s Rainbow.

At that time he invited his friend, the guitarist Gary Moore and Eddie Van Halen to go to one of their concerts. As Airey recalled in an interview with Mulatschag TV back in 2020 (Transcribed by Rock and Roll Garage) that first meeting was a little weird.

“There was once when Gary Moore first went to L.A he befriended with Eddie because for the first time in his life he had someone that seriously frightened him. They came to a Rainbow gig at Long Beach. They both looked so young, especially Eddie.”

Blackmore praised Eddie Van Halen many times over the years. He even called him the “ultimate guitar hero” after his passing.

Often called a guitarist’s guitarist, Jeff Beck is known as one of the most versatile and inventive guitar players from the last decades and Eddie Van Halen loved that characteristic.

On the list for Guitar Tricks Insider in 2016, he also chose Beck’s album “Blow By Blow” (1975) as one of his favorites. That record had famous tracks like “Cause We’ve Ended as Lovers” and “She’s A Woman”.

“I didn’t get into him until ‘Blow By Blow’ (1975). Just the instrumentalness of it. And Wired (1976), interesting stuff in there. So I guess it was just the experimentation in there that I liked. Jeff Beck is definitely a standalone.”

Jeff Beck also admires Van Halen and praised him many times over the decades.

Other influential British band that Eddie Van Halen liked was The Who. He listed the band’s famous live album “Live At Leeds” (1970) as one of his favorite albums of all time in the interview with Guitar Tricks Insider magazine in 2016.

In the conversation with Rolling Stone in 2011, Eddie revealed that The Who’s guitarist was an inspiration for him. “Pete Townshend was an influence as a rhythm guitarist. So it was just the power and intensity, and again, simplicity. You know, nothing was very complicated. Like, listen to ‘My Generation’ (Sings the main riff). Even the later stuff on ‘Who’s Next’. It’s all very power-chord based,” Eddie Van Halen said.

Van Halen was filmed in the 90s performing The Who’s “Won’t Get Fooled Again” at Eddie’s home studio “5150”. At that time, Sammy Hagar was the band’s vocalist.