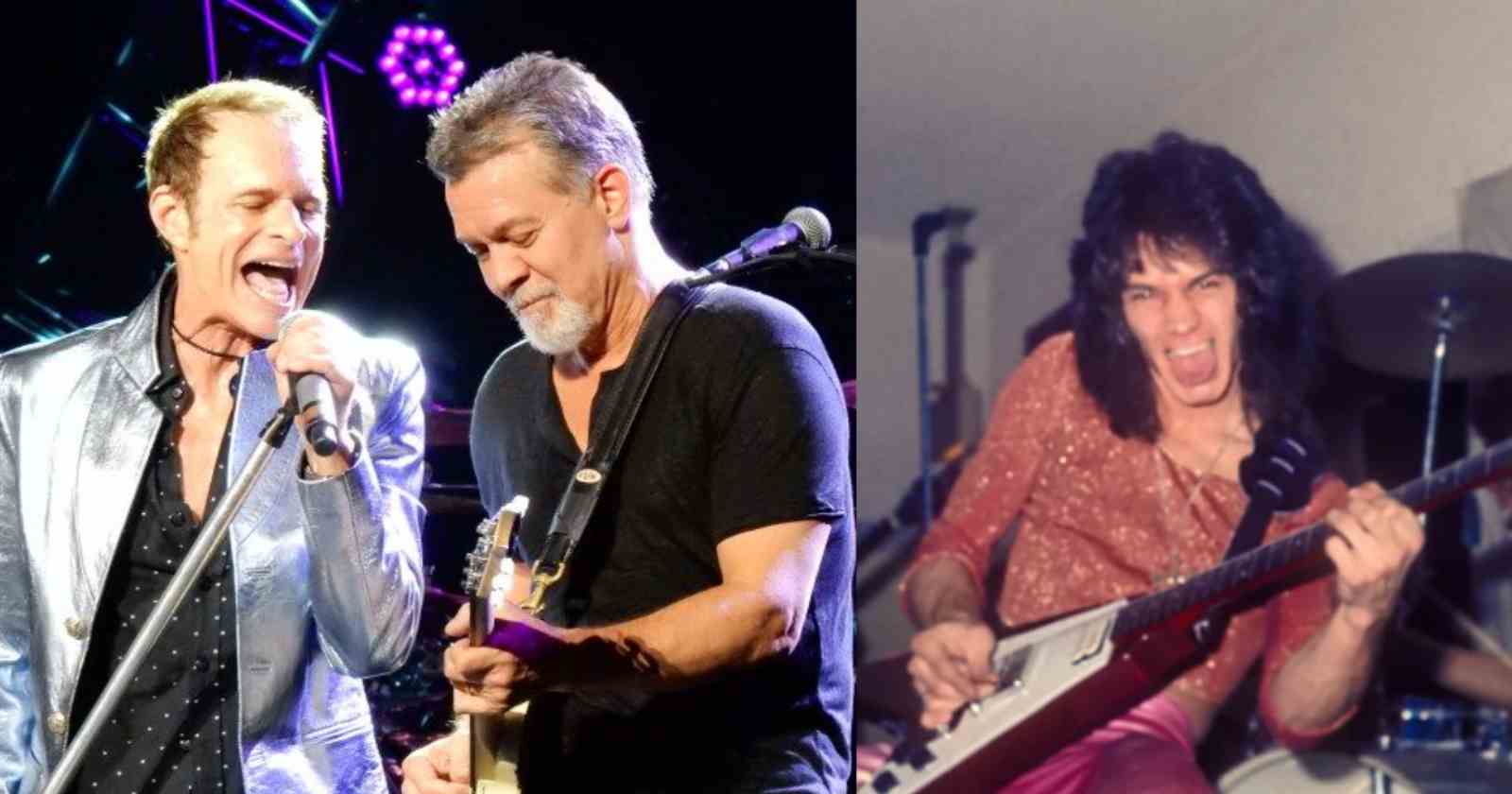 Images by @bryonsblog and Kevin Estrada

Van Halen was formed in Pasadena, California back in 1972 by the brothers Alex and Eddie that later in 1974 invited Michael Anthony and David Lee Roth to join the group. But before they released the praised self-titled debut album in 1978, the group played extensively in bars performing a lot of covers before presenting original songs.

Back then the band performed songs by almost all the famous artists from the 60s and 70s. Roll and Roll Garage selected 7 of those groups, what the Van Halen members said about them over the years and their connection with some of the bands.

In a conversation between Eddie, Alex and Lee Roth posted by Van Halen’s Youtube VEVO channel back in 2012 (Transcribed by Rock and Roll Garage) they recalled the covers that they used to play in the early days. Eddie said: “In the club days it was difficult to sound like other people. So I think it’s inherently in all of us. Not necessarily in every musician. But like you (David Lee Roth), only sound just like you. When we used to play in clubs we sound pretty silly playing some of that stuff, (or) different. We (dind’t) sound like Black Sabbath playing (imitates guitar riff). It didn’t sound anything like the record”.

In 1978, Van Halen toured with Sabbath as their opening act, also marking the beginning of the friendship between Eddie and Iommi. The Van Halen musician even helped to compose the song “Evil Eye”, released on Sabbath’s 1994 album “Cross Purposes”. The Dutch guitarist even played the guitar solo of the song but as Tony Iommi told Rolling Stone in 2020. However, Iommi wasn’t able to reproduce the Van Halen solo when recording the track. So he had to compose another one himself later.

Deep Purple was another influential Heavy Rock band that Van Halen used to cover in the early days. The recording of their 1975 show in Pasadena High School, three years before they released their debut album, shows them playing “Maybe I’m A Leo”, track from Purple’s classic album “Machine Head” (1972). They also had performed at other concerts back then the track “Might Just Take Your Life” from the 1974 album “Burn”.

Later on Eddie had the chance to meet the guitarist Ritchie Blackmore during a Rainbow tour. But as keyboardist Don Airey, who was a member of Rainbow at the time and invited Gary Moore and Van Halen to the show, recalled in an interview with Mulatschag TV back in 2020 (Transcribed by Rock and Roll Garage) the first meeting wasn’t that good. “There was once when Gary Moore first came to L.A he befriended with Eddie because for the first time in his life he had someone that seriously frightened him. They came to a Rainbow gig at Long Beach and they both looked so young, especially Eddie.”

“Eddie wanted to meet Richie. I suddenly saw Richie coming and I said ‘Hey Richie! I want you to meet two people. This is Gary Moore and this is Eddie Van Halen’. Richie kind of stormed off (laughs). I don’t know what he thought. (Maybe that) I was trying to set him up or something,” Don Airey recalled.

After Eddie Van Halen’s passing in 2020, Blackmore praised the musician in an official statement, saying he was the ultimate guitar hero.

As the band’s classic bassist Michael Anthony recalled in an interview with KLOS 95.5 back in 2021 (Transcribed by Rock and Roll Garage), one of the first covers that Van Halen did was David Bowie‘s “Jean Genie”. “I remember, in Van Halen we would all get together at Dave’s house. We would make up the flyers for some of the clubs that we played at. Alex and I were kind of in charge of that, making all the flyers and priting them all out.”

“One of the first ones (covers) that we did was ‘Jean Genie’ by David Bowie. Back then, it’s like, you couldn’t really play any of your original stuff because everybody wanted to dance and see this and that. So wherever we played we would do covers. We played everything from Bowie to ZZ Top, we played the Ohio Players. All that stuff was Roth’s idea, by the way. We just played everything to get the people in. Then once they were in we would sneak in some of the original stuff. Kind try to grow our original stuff from there. But we played pretty much A to Z, rock to whatever, you know,” Michael Anthony said.

One of the ZZ Top songs that Van Halen played in the early days was “Chevrolet”, that was the opening song of their show in 1975 at Pasadena High School in Pasadena, California, the town were the band was formed. As recording of their early concerts shows, they also used to play other songs from the Texan band, like: “Brown Sugar”, “La Grange”, “Waiting For The Bus”, “Francine”, “Tush” and “Beer Drinkers & Hell Raisers”.

The Isley Brothers and KC and the Sunshine Band

During the conversation posted on Van Halen’s Youtube VEVO channel back in 2012 (Transcribed by Rock and Roll Garage), David Lee Roth recalled how was the version that the band used to of the songs “It’s Your Thing” (The Isley Brothers) and “Get Down Tonight” (KC and the Sunshine Band): “Clearly it didn’t (sound like the record) but that was one of the attractions. We were representing it. Maybe just adding a little bit of ‘girl-friendliness’ to a Hard Rock sound. We’re a Rock band from the 70s and 60s kind of a thing.”

“When we played the club songs like ‘It’s Your Thing’ and ‘Get Down Tonight’ it was kind of a reality series game show challenge. Like, let’s take the song with the most brass, the most chicks in the background, the most rhythm section and see how a three piece would do it. But you remember, we would always try to do the solo the same as the song the first time. Then we do another verse and then we do the end solo. We worked well, we worked a lot. And we did 40, 45 minutes sets a lot,” David Lee Roth said.

In an interview with Marc Allan back in 1980, drummer Alex Van Halen recalled that they also used to cover Bad Company’s song “Deal with the Preacher“, from Bad Company’s 1975 album “Straight Shooter”. “We used to do some old James Brown, ‘It’s Your Thing’ (KC & The Sunshine Band). But then again at the other end, we did some Deep Purple, we did some Black Sabbath, we did ‘Deal with the Preacher’ by Bad Company. You name it, we played it.”

“We played anything and everything. It seemed that the wider the scope of the style of music we played any music but jazz. People just didn’t know how to dance to it (Jazz). We didn’t really care for it that much. So it wasn’t really bankable. We didn’t want to introduce a sax section,” Alex Van Halen said.

As can be heard on Van Halen’s early days performances available on Youtube, they also played other Bad Company songs like “Rock Steady”, “Live for the Music” and “Can’t Get Enough”.

Van Halen did an incredible amount of covers during their club days and some of other band’s they covered back then were: Rolling Stones, Rainbow, Edgar Winter, Spooky Tooth, Montrose, James Gang, Budgie, Kiss, Queen, Grand Funk Railroad, Rod Stewart, Led Zeppelin, The Beatles, Aerosmith, Johnny Winter and The Kinks.