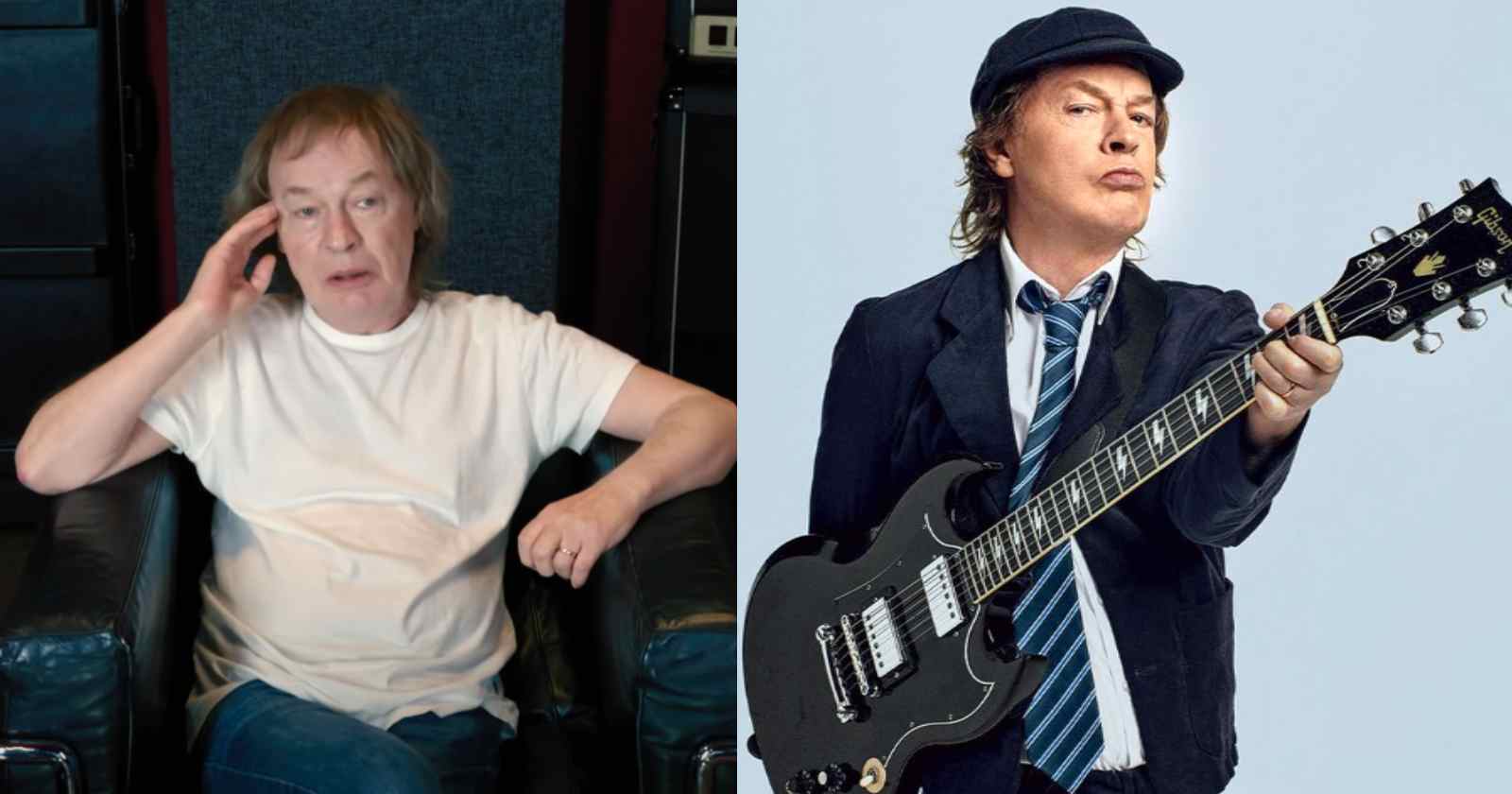 Angus was inducted into the Rock and Roll Hall of Fame back in 2003 as a member of AC/DC by Aerosmith vocalist Steven Tyler. The singer said in his speech: “AC/DC is the ultimate middle finger aimed at the establishment.”

Chuck Berry was one of Angus Young’s biggest influences as he revealed in an interview with BBC’s “The Rock Show With Johnnie Walker” in 2021 and chose the American guitar and singer as his “Rock God”.

In an interview with Rolling Stone magazine in 2001, he listed Berry’s after he was asked which kind of music he used to listen and that got his “toes tapping”: “I plug into a lot of old rock & roll. Chuck Berry, Buddy Holly, Little Richard and Jerry Lee Lewis. I love all that stuff. In fact, if I get a chance and I’m on my way to a gig, I’ll put one of their tapes on. Because they’re good vibe-meters and I still get off on them.”

Angus also “copied” from Chuck Berry the famous “duckwalk” while playing the guitar on stage, that evolved with Angus to a much faster move. Berry was inducted into the Rock and Roll Hall Of Fame back in 1986 by Keith Richards, who said in his speech: “I lifted every lick he ever had played”.

One of the artists that most AC/DC fans wouldn’t expect that Angus Young likes to listen is Louis Armstrong, who was one of the most influential figures in Jazz music as a singer and trumpeter. The guitarist even had the chance to see him live in concert as he recalled in an interview with Paste Magazine in 2021. “My sister (Margaret), even when I was very young, took me to see music. She would get records for us. Especially a lot of old blues.”

“She would get a whole collection of them and play them. Also she took Malcolm and myself when we were younger to see a big open-air show with Louis Armstrong. That always stuck in my mind. Maybe at the time we were so young that we didn’t realize it. But then later on you realize that here was this man with this big history of music. So it was always good.”

Born in New Orleans, Louisiana back in 1901 Louis Armstrong had a career that spanned five decades. For his extensive and praised work he received several prizes, including one Grammy Award. Some of his most famous tracks are “What a Wonderful World”, “Dream A Little Dream Of Me” and “Cheek To Cheek”.

Little Richard was another legendary musician that inspired countless generations of Rock and Roll musicians, including Angus Young. Back in 2020, the musician praised Richard in an interview with Forbes, saying: “Little Richard, I loved the energy. Still to this day if I want to hear rock and roll and that energy and songs that pack a punch it’s Little Richard.”

In an conversation with Classic Rock magazine back in 1977, the AC/DC guitarist said that if people compared the wildest music that was being made at the time to what Little Richard did it would “sound timid in comparison.”

Coincidentally as Young revealed in an interview with Rolling Stone in 2003, Bon Scott watched years before his passing, Brian Johnson would eventually replace him in AC/DC and told Angus and Malcolm that his singing was something that was similar to Little Richard. “Bon was a great fan of Little Richard. He always said that for someone singing rock & roll, Little Richard was the icon. He told us a story about how he’d seen Brian in a club in London really belting out a Little Richard tune. So he said it always stuck with him. Then we thought, ‘Well, we gotta look up that guy first.’ When we met Brian, he told us, ‘Yeah, I remember that show. I had appendicitis’ [laughs].”

As Angus pointed in the conversation with Rolling Stone, Buddy Holly is also a favorite to listen to. In the final years of his brother and bandmate Malcolm Young, who died back in 2017 at the age of 64 from the effects of dementia, the musician said that his brother still liked to listen to the old records of Buddy Holly, the ones they grew up listening to.

The American musician born in Lubbock, Texas in 1936 died too soon at the age of 22 in 1959, in a plane crash with two other famous musicians: Richie Valens and The Big Bopper. February 3, the day of their death is still known as “the day that the music died”.

Some of his most famous songs are “Everyday”, “That’ll Be The Day” and “Peggy Sue”.

As he pointed to Rolling Stone in 2001, Jerry Lee Lewis music is one of the ones that get his “toes tapping” and that he likes to listen. During a conversation with VH1 in 2014, Angus Young even made a joke about Jerry Lee Lewis, saying: “I mean when they said, ‘This guy’s the killer.’ He was singing about balls before we did, you know “Great Balls of Fire.”(laughs)

Born in Ferriday, Louisiana, United States back in 1935, Jerry Lee Lewis changed alongside his peers like Little Richard, the role of the piano in the Rock and Roll music, making it the central sound on their records. Besides “Great Balls Of Fire”, some of his most famous songs are: “Whole Lot Of Shakin’ Going On’, “Wild One” and “Middle Age Crazy”.