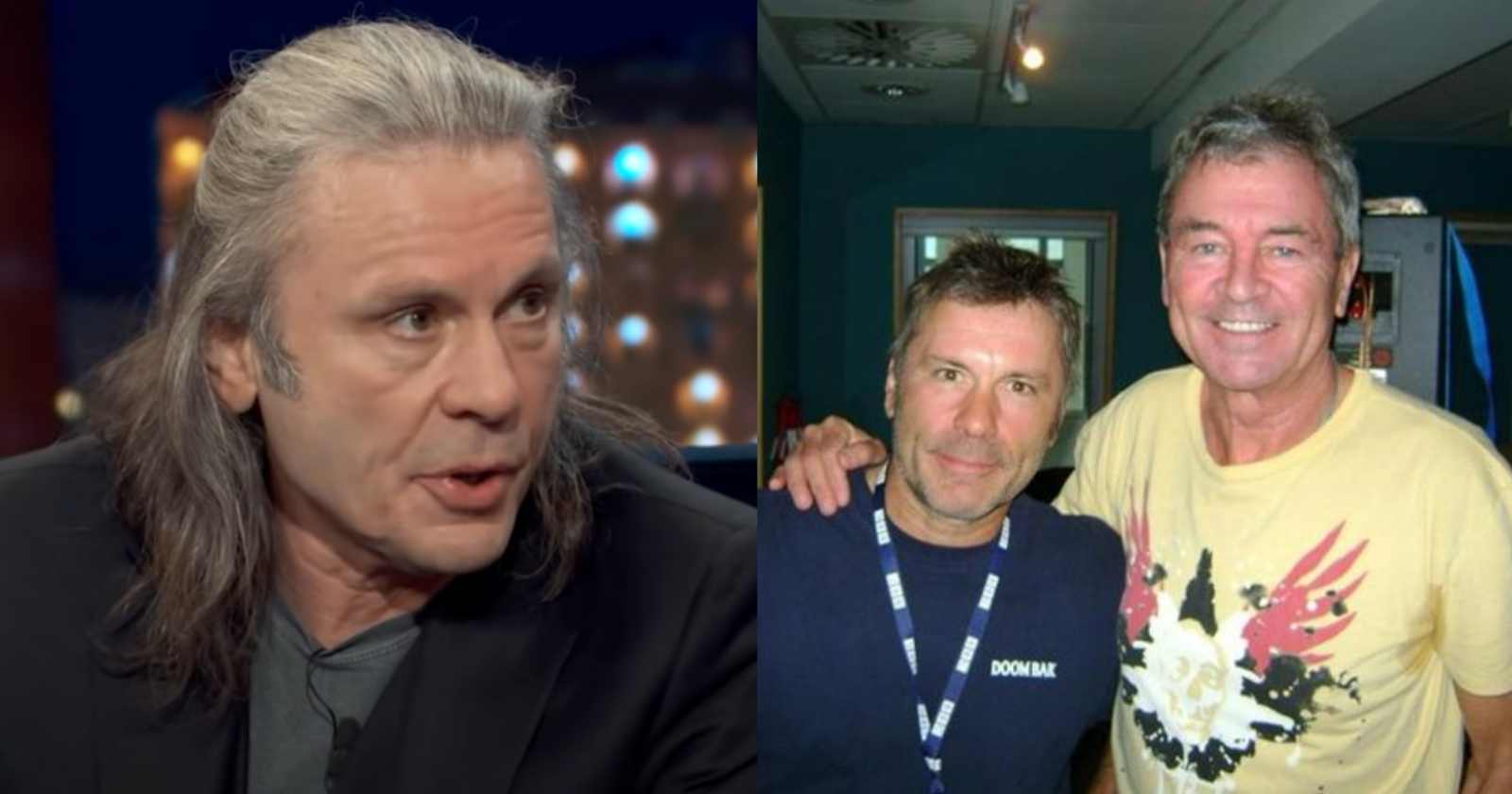 The singer Bruce Dickinson started his career in Heavy Metal as the vocalist of Samson, recording three studio albums with the group but his career really took off when he joined Iron Maiden in 1981. He was a crucial element to help the band to become one of the best-selling groups of all time with an estimated amount of more than 130 million records sold worldwide.

Even he left the group for six years in the 90s to pursue a solo career, Dickinson continued to show in his songs the incredible vocal range that he has. Over the decades the musician talked a lot about his peers and the influence that artists from different music genres had on him.

To show more about his broad taste, Rock and Roll Garage selected 10 singers that Bruce Dickinson already said that he likes.

The Led Zeppelin vocalist Robert Plant was one of the first singers who showed the Rock artists how far a singer could go with his voice. Bruce recognized that in an interview with Metal Rules back in 2000, when he listed Plant as one of the vocalists who were the bases for the Heavy Metal singing style.

“There are basically 3 bases for the metal style of singing. If you join aspect of these 3 singers, you have everything. These 3 singers are Robert Plant (Led Zeppelin), Ian Gillan (Deep Purple, Black Sabbath) and Paul Rodgers (Free, Bad Company). If you join them in various combinations you have everyone was always talking about well,” Bruce Dickinson said.

The Iron Maiden frontman already mentioned Robert Plant as one of his biggest inspirations over the years. Talking with Loudwire in 2015 he recalled how impressive it was to see Led Zeppelin performing live in the early 70s, even on TV.

“The early Robert Plant stuff. Really early Zeppelin was unbelievable. My favorite stuff from that era, they did like Danish TV shows and they did live. Wow, it is like completly unedited. Raw as it was and it’s just astonishing. It’s primal,” Bruce Dickinson said.

Bruce had the chance to cover a Led Zeppelin song with Iron Maiden. The bnad re-recorded the track “Communication Breakdown”, that was later featured as the b-side of Maiden’s 1990 single “Bring Your Daughter To the Slaughter”.

Even though Robert Plant was huge influence, when Bruce Dickinson needs to chose his favorite between between Led Zeppelin and Deep Purple, he picks Purple as he revealed to Metal Hammer in 2016. One of the main reasons is the vocalist Ian Gillan, who is one of his biggest heroes.

The Iron Maiden frontman even chose Gillan as his “Rock God” in interview with BBC Radio in 2021. The musician recalled that he was so nervous the first time that he met Gillan face-to-face that he vomited.

“In comes my idol, kicks the door and goes, ‘Come on, mate. Out you come. Let’s get you wiped down with a towel.’ He put me in a taxi and sent me home. I’ve never forgotten that – and he’s never let me forget it either,” Bruce Dickinson said.

He had the chance to perform live in concert many times over the decades with Deep Purple members, including Ian Gillan.

Another singer who fronted succesful British bands that Bruce Dickinson likes, is the late American vocalist Ronnie James Dio. He even told Consequence in 2022 his debut album in Iron Maiden “Number Of The Beast” (1982), that is the band’s best-selling album, was mainly inspired by two albums that Dio was part of.

“I think the last album – well for me anyway – the last album that really was a big influence on me, before ‘Number the Beast’ was born is probably ‘Rainbow Rising’. You know, when you got to hear Ronnie in full, full throat, and Blackmore playing his pants off, and ‘Stargazer’, and you’re going, ‘Oh, my God, nobody’s done this in metal before!”

“Wow, this is just incredible! Here’s somewhere to go.’ And then Ronnie joined Sabbath and, of course, ‘Heaven and Hell’ is another classic. So, I think that [Iron] Maiden, the ‘Number of the Beast’ album, offered a kind of a bridge between the two worlds, you know?” Bruce Dickinson said.

Even though Chris Cornell and Eddie Vedder were part of Grunge bands, music genre that many people said that “killed” Heavy Metal, Bruce Dickinson likes them. Talking with Let It Rock back in 2001, the Iron Maiden vocalist listed the singers from Soungarden and Pearl Jam as the “best Rock voices” he heard in the previous years.

“Best two rock voices I’ve heard in a last few years both have been from Grunge bands: it’s Eddie Vedder (Pearl Jam) and the other one is Chris Cornell from Soundgarden,” Bruce Dickinson said.

He had already praised Cornell in a conversation with Folhateen, the teenager segment of the Brazilian newspaper Folha De São Paulo back in 1997 (Translated by Rock and Roll Garage). “The best voice I’ve heard in rock is Chris Cornell. I don’t think he’s going to sing Hard Rock anymore. But he can beat any metal vocalist.”

Besides touring with Iron Maiden around the world, Bruce Dickinson is often on road doing lectures where he also answer to fan questions. In 2022, he was asked in Columbus, Ohio which was his favorite female singer. The musician mentioned the Heart vocalist Ann Wilson and said:

“The one that rolls off the tip of my tongue is Ann Wilson from Heart. Although she didn’t have the kind of — not charisma; notoriety or whatever of somebody like a Janis Joplin, an equally great voice and things like that, she’s just a complete all-arounder.”

“The most amazing voice… A beautiful folk singer, fantastic metal singer with a lovely edge to it, flawless technique. Honestly, not worthy. Amazing,” Bruce Dickinson said.

Heart was formed in Seattle, Washington back in 1967 and achieved fame in the late 70s and 80s. Some of their biggest hits are “Barracuda”, “Alone” and “Crazy On You”.

Peter Hammill, the vocalist and multi-instrumentalist from the British Progressive Rock band Van Der Graaf Generator is another artist that Dickinson admires. As the Iron Maiden frontman told Henrik Johansson in an interview back in 1998, Hammill was one of his “childhood lyrical heroes”.

“Peter Hammill was one of my childhood lyrical heroes. But, you know, you say ‘Peter Hammill’ to most people and they go; “Huh?”. And it’s such a shame cause they had so much more to them, I think, than Genesis. They were a bunch of pansies compared to Van der Graaf, really…”

“When I was a kid I used to go through his lyrics with a microscope. Lyric wise I was really into Peter Hammill, Ian Anderson and Gillan. Gillan’s lyrics I thought were pretty cool and they were very rock ‘n’ roll. Especially the early stuff from ‘Deep Purple in Rock’.”

“I was never particularly into Robert Plants lyrics. They just never really got to me. I like them more now than I did then. In general I sort of appreciate Zeppelin a bit more now than I did when I was a kid. And Peter Hammill had some really good poetical lyrics which are very cool. I’d like to write more of them in the future,” Bruce Dickinson said.

Another Progressive Rock singer that Bruce loves is the Jethro Tull vocalist and multi-instrumentalist Ian Anderson. He was one of the main influences of Dickinson and his bandmate Steve Harris.

Talking with Eddie Trunk in 2021, the singer said that he loves the album “Aqualung” and other early records from the group.

The frontman was lucky enough to have covered a Jethro Tull track with Iron Maiden. A version for “Crossed-Eyed Mary” was recorded by the Heavy Metal in 1983, being released as the B-side of the single “The Trooper”.

Decades later, in 2011, Bruce had the chance to share the stage with Anderson, performing with him as special guest at the Canterbury Cathedral.

The praised Bad Company, Free and The Firm vocalist Paul Rodgers is another artist that Bruce Dickinson admires. As he told Metal Rules in 2000, he thinks that Rodgers, alongside Robert Plant and Ian Gillan are the bases for the Heavy Metal singing style.

He had also praised Rodgers in a conversation with Metal Hammer in 2022, saying: “Paul Rodgers. I just thought that Rodgers was just stunning. I didn’t even really try and copy his phrasing because I thought you just can’t it’s just he’s just so good.”

In 1973 he joined the supergroup Bad Company, writing many classics like “Shooting Star”, “Feel Like Makin’ Love” and “Rock and Roll Fantasy”.

He also was part of the supergroup The Firm that had Jimmy Page as the guitarist.

One of the pioneers of Shock Rock, the British singer Arthur Brown, known for his 60s hit “Fire” is another vocalist that Dickinson likes. He was fortunate enough to have seen Brown performing live in concert at school when he was young.

The Iron Maiden vocalist recalled that moment in an interview with Double J in 2018.

“I saw Arthur Brown at school. He wasn’t doing Crazy World, he was doing a band called Arthur Brown’s Kingdom Come, it was pretty advanced for its day. I was 15 years old with my mind scrambled on Mars Bars and Fanta. I had a massive sugar rush.’

“I’m sitting there, and the lights go down in this small Gothic Great Hall, and out comes Arthur, dressed in this Inca headdress. He stands before an altar. There’s no drummer in the band, just two keyboard players, a bass player and a guitarist. There’s a drum machine. This is in 1975 – a drum machine! And it’s played by Arthur.”

Even though Arthur Brown is known for the theatrical concerts, Dickinson praised his vocals in the interview. “(…) But that voice came out, it was like the voice of God. He had an amazing voice, it was just spectacular. So I borrowed a lot of his phraseology and style. I loved the fact it was almost semi-operatic but kind of anarchic as well, what he did with his voice.

“As a frontman he was completely nuts. Arthur was a completely off the wall. He was a great English eccentric. The album that comes from [1968’s The Crazy World of Arthur Brown] is probably one of the first – if not the first – concept album. It was about a man’s descent into hell. Oobviously when [‘Fire’] happens, he’s just got to the door of hell,” Bruce Dickinson said.