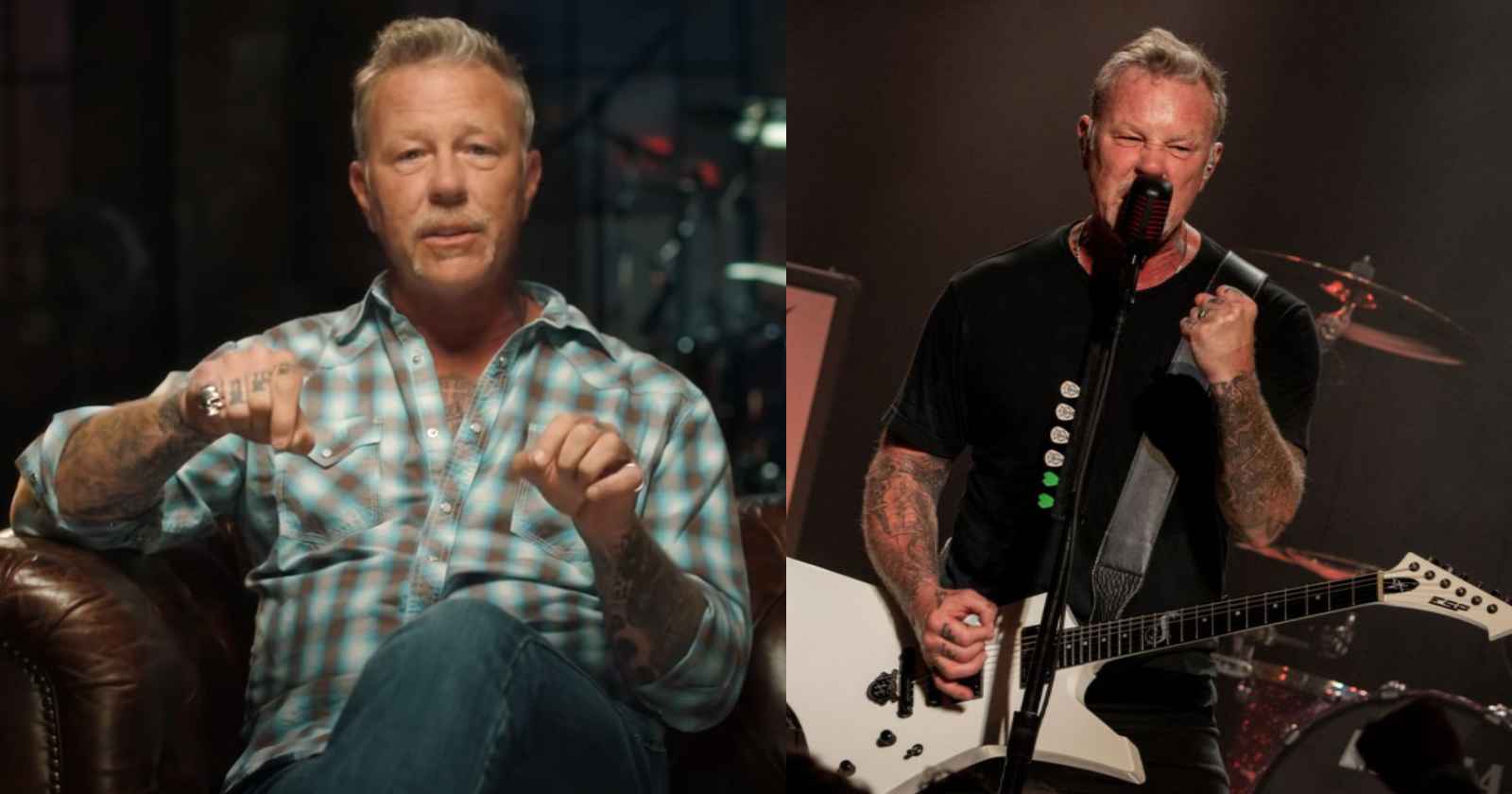 Born in Downey, California back in 1963, James Hetfield formed Metallica with the Danish drummer Lars Ulrich back in 1981. They became one of the best-selling bands of all time with an estimated amount of 125 million records sold worldwide.

As the band’s guitarist, vocalist and main lyricist, Hetfield became one of the most famous frontman’s of Heavy Metal music. His lyrics, vocals and rhythm guitar influenced a whole generation of musicians that consider him one of the best in history. Back in 2008, Rolling Stone magazine listed the 100 best singers of all time with the help of many famous artists who voted for their poll. Hetfield was one of them and between the vocalists he chose for his list, there were 8 Metal singers. Rock and Roll selected what the musician said about those vocalists over the years and his connection with some of them.

Heavy Metal music probably wouldn’t exist without Black Sabbath and consequentially Metallica wouldn’t be the same. That is one of the reasons why Hetfield listed the original Sabbath vocalist Ozzy Osbourne as one of the best singers of all time. The Thrash Metal frontman even revealed in an interview with San Jose Sharks back in 2015 (Transcribed by Rock and Roll Garage)that if he had to chose his favorite band of all time, it would be Sabbath.

“(All time favorite) band is hard because there is so many. Led Zeppelin is in there, Motörhead, boy… they all offer a little bit different. But if I was stuck for one: Black Sabbath,” James Hetfield said.

Besides covering Sabbath’s classic songs “Sabbra Cadabra and National Acrobat” on Metallica’s 1998 covers album “Garage Inc.”, Hetfield was also lucky enough to have honored them by inducting the band into the Rock and Roll Hall of Fame alongside his bandmate Lars Ulrich. The two, were the ones who gave a speech during the induction of Black Sabbath back in 2006. Hetfield gave an emotional speech, saying that his life changed when he was looking at his older brother record collection when he was kid and heard Sabbath’s 1970 debut album for the first time.

“Picture a 9 year-old boy, quiet, well behaved on the outside. But on the inside boiling and dying for life to burst open with any sort of stimulation. The discovery of music was what was to burst it wide open. But not just any music. This was more than just music. (It was) a powerful loud heavy sound that moved his soul,” James Hetfield said.

Just like Black Sabbath, Judas Priest is another Heavy Metal band from Birmingham that influenced Hetfield and he chose the band’s vocalist Rob Halford as one of the greatest of all time. Over the decades the members of Metallica and Priest became good friends. They played live on stage with each other many times. Halford, that is also known as The Metal God, even performed the Priest song “Rapid Fire” with Hetfield’s band on their 30th anniversary celebration in 2011.

Talking with Billboard back in 2014, Hetfield said that Priest was one Metallica’s biggest influences. “Judas Priest is everything we wanted to be as a band starting out. If someone asked you to define what heavy metal is, that’s one of the bands you’d show them,” James Hetfield said.

The American vocalist Ronnie James Dio, famous for his work with Rainbow, Black Sabbath and his own group Dio, is another singer that Hetfield said it is one of the best in history. The Metallica frontman even tried to discover how Dio kept his voice in shape as he recalled in an interview with Music Radar back in 2016. But, he found that Dio really had a natural gift for singing and he didn’t even warm up before the concerts. “When we did the Ronnie Dio tribute record. We did this medley of a bunch of different Dio songs. I just realized how fucking amazing that guy was. And it pissed me off, because when I met him I said, ‘Hey, can I hear your warmup tape? What do you do. What’s your secret to all of this?’”

“And he said, ‘Well, I just have a little glass of wine and go out and sing.’ What?! Yeah right! But I don’t think he was BS’ing me. He was just a natural singer and he had a range that had power all the way through it. He just continues to challenge me which is great,” Jamaes Hetfield said.

As Hetfield recalled, Metallica was part of the tribute album made for Dio in 2014 called “Ronnie James Dio – This Is Your life”. The band recorded a medley called “Ronnie Rising Medley”. It had the Rainbow songs “A Light In The Black”, “Tarot Woman”, Stargazer” and “Kill The King”.

Another iconic frontman that James Hetfield listed as one of the best singers of all time is the late Lemmy Kilmister. Motörhead was famous for Lemmy’s clever lyrics, raspy vocals and loud bass guitar and is one of Metallica’s main inspirations as Hetfield said over the years.

The musician even told Newsweek in 2017, that Metallica would never exist without the British band. “Lemmy in particular was an icon. Sort of a godfather for people who love heavy metal. He was the captain of the ship. And we all felt he was immortal [laughs], doing the hard, hard, hard livin’ for such a long time on the road. Just really goin’ for it [laughs]. We knew it would come to an end at some point. But we really didn’t expect it. There’s certainly no Metallica without a Motörhead.”

“We would get to jam with Lemmy. He was a very friendly guy. We covered quite a few of their songs. You know, Motörhead never made it into the Rock and Roll Hall of Fame, which is a shame. But he did win a Grammy for a song called Whiplash that we had recorded on Kill ’Em All. We were trying to write a Motörhead song. He covered our song [for Motörhead’s 2006 album, Kiss of Death] that was kind inspired by him. (Then) he wins a Grammy for it. That is very cool,” James Hetfield said.

Besides playing many times with Lemmy on stage, Metallica covered four Motörhead songs: “Overkill”, “Damage Case”, “Stone Dead Forever” and “Too Late Too Late” on their 1998 covers album “Garage Inc.” The same thing happened with Motörhead, that covered Metallica tracks like “Enter Sandman” and “Whiplash”.

Even though Iron Maiden achieved the peak of their fame with Bruce Dickinson on vocals, James Hetfield always noted that he likes the “early Maiden” that had Paul Di’Anno on vocals. That’s one of the reasons why he chose Di’Anno as one of the greatest singers of all time on his list to Rolling Stone.

In an interview with the Colombian radio station Radioacktiva in 2016 (Transcribed by Rock and Roll Garage), Hetfield talked about those early Maiden records. “Early Iron Maiden albums. I love the new wave of the British Heavy Metal. That makes me feel good. It reminds me of youth”.

He also praised that era of the British group in a video posted on Metallica’s official Youtube channel in 2016 (Transcribed by Rock and Roll Garage). He shared some of his memories of going to record stores and one of them was buying those Maiden albums. “I bought this (Maiden’s debut album) just because of this (the cover), because look at that! Why would you not buy this?”

“That dude look really menacing and evil. I bought that and I had never even heard of them. So I bought it, put it on and I’m glad I did. Because it was a really was a big inspiration for me in the early days,” James Hetfield said.

The American singer John Bush is another one that Hetfield chose as one of the best in the history of Metal. He first achieved fame as the frontman of Armored Saint and later of Anthrax (1992 to 2005, 2009 to 2010). Curiously, he was even invited to be Metallica’s vocalist in the early days of the band as Hetfield recalled in an interview with Sirius XM in 2021.

“A lot of those early memories (of the band) were celebrated with a band called Armored Saint. (They) were a fellow L.A. band back in the early ’80s when we were getting started. Obviously, John Bush was a singer we got to know really well. (We) really, really tried to get him into the band as the singer.”

“It didn’t work out. He was dedicated and very in love with what he was doing with his brothers in Armored Saint. We absolutely respect that. But we got to hear them and love them every single night,” James Hetfield said.

Metallica was heavily inspired by the New Wave of The British Heavy Metal, formed by bands that appeared in the late 70s and early 80s. One of the groups that influenced the American band the most was Diamond Head, famous for the hit “Am I Evil?”. That track was successfully covered by Metallica in 1984 and released as a single.

So it’s not a surprise that Hetfield chose the classic Diamond Head vocalist Sean Harris as one of the best of all time. The musician fronted the British group and played rhythm guitar from 1976 to 1985, 1990 to 1994 and from 2000 to 2004. Harris performed with Metallica and Diamond Head on the 30th anniversary celebration of the American band back in 2011.

Another American Metal singer that Hetfield chose as one of the greatest of all time is Maynard James Keenan from the Progressive Metal band Tool. Maynard formed the group in 1990 alongside guitarist Adam Jones and drummer Danny Carey. They have released only five studio albums “Undertow” (1993), “Ænima” (1996), “Lateralus” (2001), “10,000 Days” (2006) and “Fear Inoculum” (2019), but gained over the years a cult-following audience.

Back in 2020, in an interview with The Void, Maynard James Keenan said that he finds more weight in PJ Harvey and Gillian Welch than in Slayer and Metallica, for example. “For me, the weight comes from mood. So I find a more creative space and a more productive space in a more moody piece. So as far as weight, I think most people kind of think of weight in terms of Metallica, you know, some of the heavier bands – Slayer. But I find weight in things like PJ Harvey and Gillian Welch. And a band called Low.