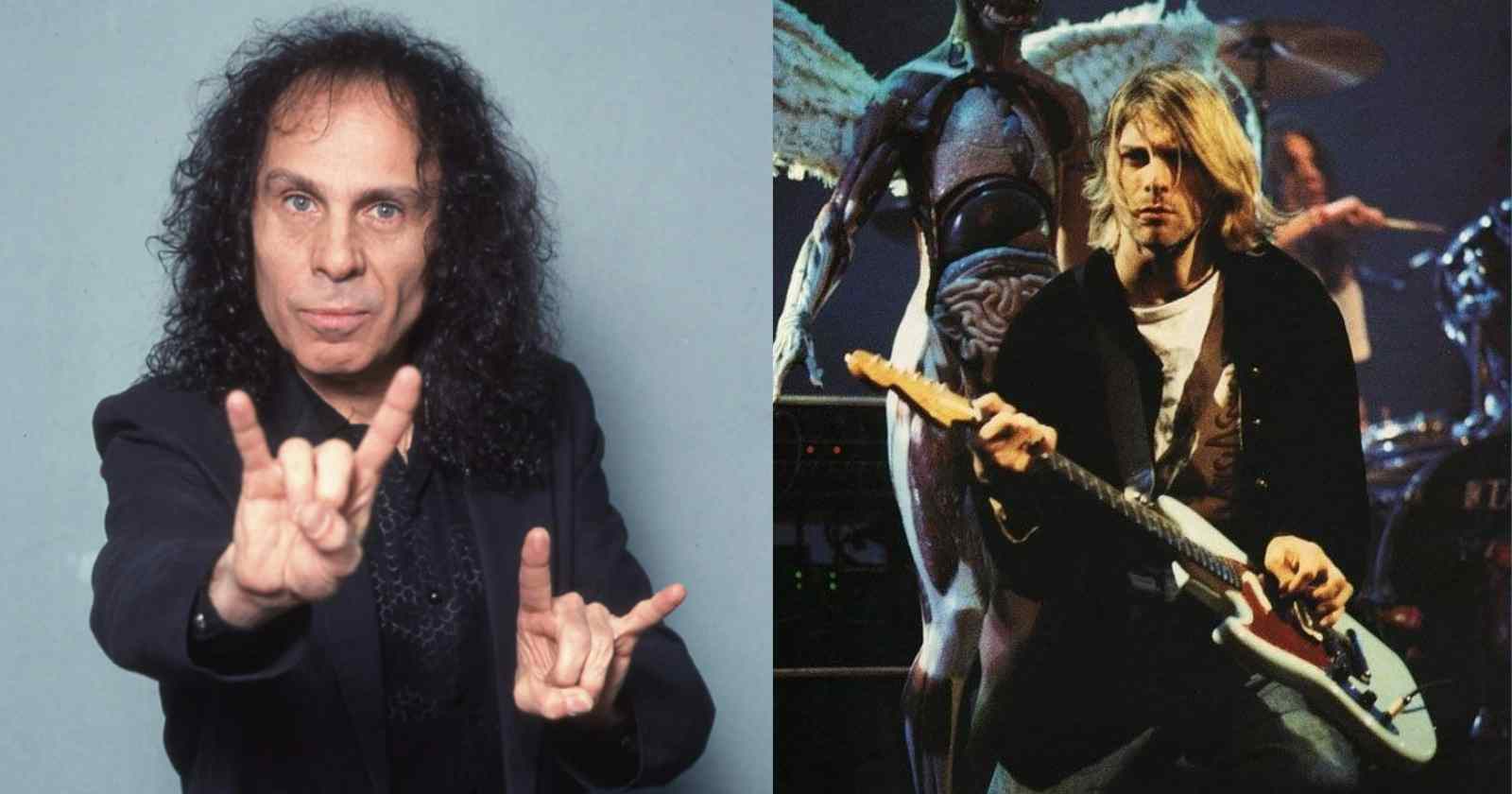 Led by bands that appeared in Seattle in the late 80s and achieved fame in the early 90s, Grunge was a new Rock and Roll subgenre that is considered as the one that “killed” Heavy Metal music at that time, because it became the most successful genre on the mainstream media. Even though that represented a huge drop on MTV airtime, that was important at that time and on album sales, the late Rainbow and Black Sabbath singer Ronnie James Dio said in an interview with Rock Eyez‘s David Felix back in 2006 that he liked the movement and listed some of his favorite bands.

When asked if he knew at the time what impact the new Rock and Roll sound would affect the industry, Ronnie James Dio said: “I didn’t really know how far the Grunge movement would go upon first hearing it. But I knew I liked a lot of it. It was different enough and good enough to develop a huge following, and of course… it did!”

“I liked Nirvana very much. Kurt Cobain‘s voice had great harmonics in it and the “go for broke” music was very cool”, Dio said to Rock Eyez. Nirvana also had members who were fans of Dio’s career and one of them was the then drummer Dave Grohl. In an interview with Eric Blair in 2019, he praised the late singer and his classic 1983 album “Holy Diver”. “Well, Holy Diver is one of the best fucking albums of all time. When I listen to records, I don’t just listen to the vocals, I don’t just listen to the drums. I listen to it as a whole. But an album like that, that’s kind of the perfect record. Vinny Appice’s playing on that fucking album is insane.”

“As a drummer, I listen to that record and it’s, like, I don’t know if it’s composition or if that shit was just coming off the top of his head. But as a drummer, that album is incredibly inspiring and influential. The simplicity of something like that.”

“That’s one of the things I’ve always loved about Dio’s music. It’s not overly complicated or orchestrated. It’s a sum of a few very simple parts, and it’s powerful. And I fucking grew up with that shit. I remember being 13 or 14 years old and seeing ‘Stand Up And Shout’ live on ‘Don Kirshner’s Rock Concert’ on Friday night. It makes you want to become a musician,” Dave Grohl said.

Drummer Vinny Appice, who was Dio’s bandmate in Black Sabbath and in Dio, talked in interview with Talkin’ About Rock in 2022 about Grohl’s love for “Holy Diver”. He even said that Nirvana supposedly chose to record “Nevermind” (1991) at Sound City because the Dio record was made there. “I meet people, like, ‘Oh, man. ‘Holy Diver’!’ Dave Grohl was totally influenced by that album. He even went to Sound City studios to record [Nevermind] because there was a platinum ‘Holy Diver’ on the wall. They said, ‘That’s it. We have to record it here. This album was done here.’ It was a great influence on so many people,” Vinny Appice said.

Formed in 1987 in Aberdeen, Washington, Nirvana became the most successful Grunge band of all time, especially because of their groundbreaking album “Nevermind” (1991). The record sold an estimated amount of  30 million copies worldwide.

“Soundgarden was a slightly different animal. Brilliant songs, musicianship, and Chris Cornell!” Dio told Rock Eyez. In an interview with Eric Blair back in 1997 (Transcribed by Rock and Roll Garage), Dio praised bands that were being brave enough to defy the music industry and do different things. He cited Soundgarden as an example. “That’s what I like about what the new music. People play what they want, not because there’s someone there with the pen and paper adding up figures saying: ‘This is what you’ve gotta do. You must be the next Guns N’ Roses.”

“That’s what I like about the young bands. They’ll go ‘Screw you, this is what we gonna play. That’s what I mean about bands like Soundgarden and hopefully us too. Listening to what’s out there and making the music a little more progressive. The millenium is coming, the year 2000. What we gonna do? Make the same album again? I don’t wanna make ‘Holy Diver’ again, I don’t want make ‘Heaven & Hell’, I don’t wanna make the first Rainbow album again.”

“I wanna take steps foward. So that’s what I hear. But I don’t wanna abandon what my feeling is about the music I’ve made as well. So, again like I suggested Soundgarden (what) have done. Take the values of today and stick them inside some traditionalism. (Also) have some progression and I think it will be better off for,” Ronnie James Dio said.

Formed in Seattle, Washington back in 1984, Soundgarden is one of the most influential Grunge bands in history. They became known especially after the release of the album “Badmotorfinger” (1991) and are often recalled for Chris Cornell’s powerful voice and their incredible guitar riffs.

In the interview with Rock Eyez, Ronnie James Dio only refered to Alice in Chains and the next to bands on the list as “quality stuff”. But

Alice In Chains paid tribute to Dio during their concert in Glenn Falls, New York back in 2010, 3 days after the legendary musician passed. They dedicated the song “Nutshell” to him. Also after the show was over, Rainbow’s classic song “Man On The Silver Mountain” was played over the P.A.

Another influential Grunge band, Alice In Chains was also formed in Seattle, Washington in 1987. They are best known for their successful albums with the late vocalist Layne Staley: “Facelift” (1990), “Dirt” (1992) and “Alice In Chains” (1995).

Pearl Jam was another band that paid tribute to Dio after his death in 2010. At their concert in Boston, Massachusetts, they closed their performance of their famous song “Alive” with the classic guitar riff from Black Sabbath’s “Heaven & Hell”.

One only big Grunge band that still continues active with almost the same line-up that made their classic albums, Pearl Jam was also formed in Seattle, Washington. They started in 1990 and one year later released their debut album “Ten” (1991) that had huge hits like “Even Flow”, “Jeremy”, “Black” and “Alive”.

Even though the Stone Temple Pilots had a sound really similar to the music the Grunge bands from Washington were making, they were formed in San Diego, California back in 1989. Their original line-up had the late singer Scott Weiland, the brothers Dean DeLeo (Guitar) and Robert DeLeo (Bass), and drummer Eric Kretz.