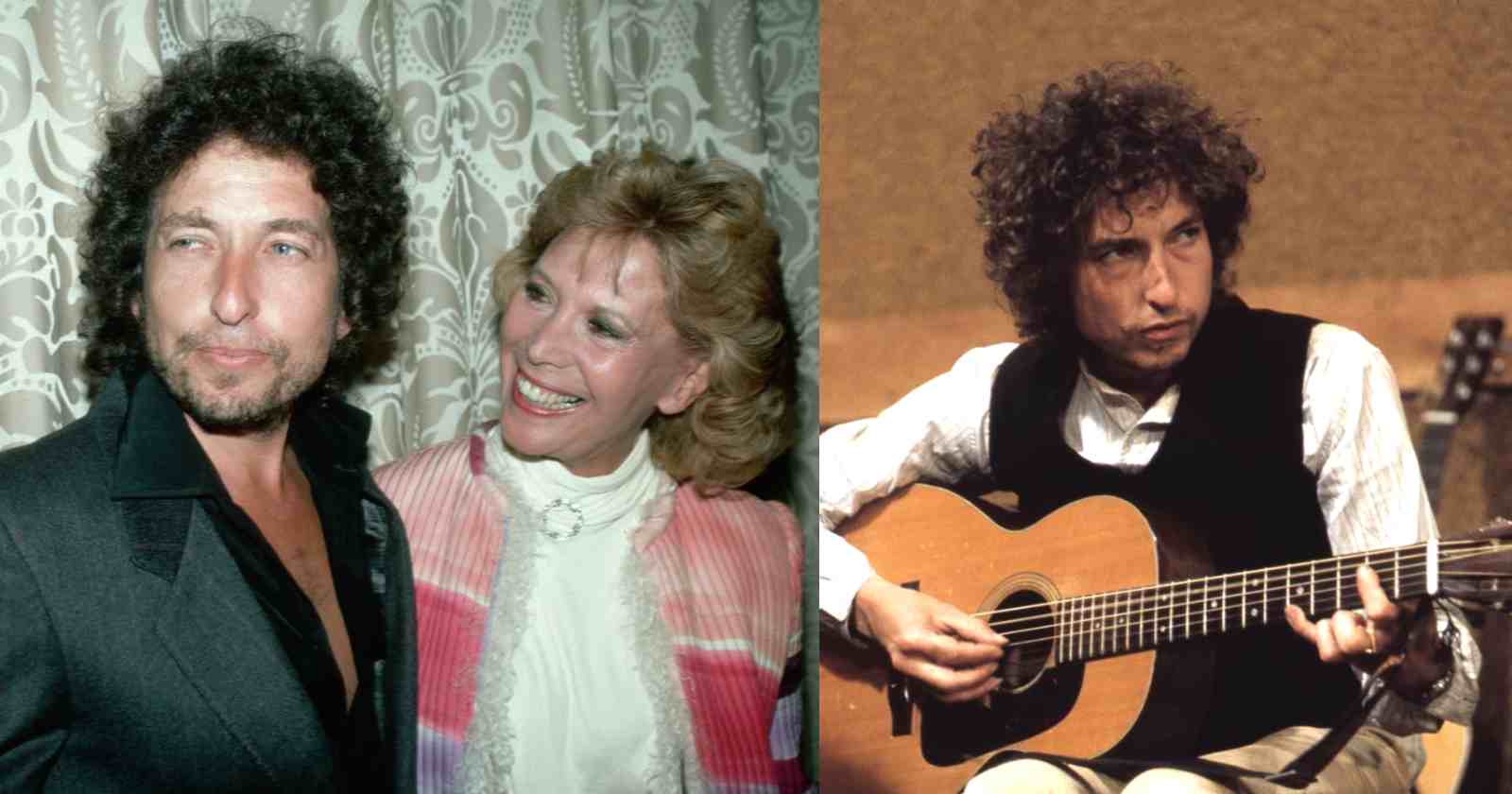 Bob Dylan started his career in 1961 and over the decades released hundreds of original songs that became some of the most influential of all time. His compositions were not only inspiring for many artists, they were also successfuly covered by many other bands like The Byrds, Jimi Hendrix and The Band.

Even though Dylan doesn’t give many interviews, he revealed during his career some songs from other artists that he likes. Rock and Roll Garage selected the 21 songs that Bob Dylan said that are some of his favorites and tells his connection with some of the artists he named.

Bob Dylan and The Rolling Stones have mutual respect for each other’s music and the American songwriter named in an interview with The New York Times in 2020, the 3 songs from the British band that he likes. He was asked if there were any Stones tracks that he wished he had written. He said: “Oh, I don’t know. Maybe ‘Angie,’ ‘Ventilator Blues,’ and what else, let me see. Oh yeah, ‘Wild Horses.’”

The three songs that Dylan chose are from the early 70s, when the band had the praised guitarist Mick Taylor, who curiously recorded with Dylan later on.

“Wild Horses” was written by Mick Jagger and Keith Richards, being featured on the band’s 1971 album “Sticky Fingers”. “Ventilator Blues” is a less famous track from the band’s classic 1972 album “Exile on Main St.” that was written by Jagger, Richards and Taylor.

Also written by Jagger and Richards, “Angie” is one of the band’s most famous ballads. It was featured on their 1973 “Goats Head Soup”.

The Eagles “New Kid In Town”, “Life In The Fast Lane” and “Pretty Maids All In a Row”

In the same conversation with The New York Times in 2020, the musician was asked if he had any favorites The Eagles songs. The question was made because Dylan mentions Glenn Frey, the late singer and guitarist of the band, in his song “Murder Most Foul” released on his album “Rough and Rowdy Ways” (2020).

“‘New Kid In Town,’ ‘Life In The Fast Lane,’ ‘Pretty Maids All In A Row.’ That could be one of the best songs ever,” Bob Dylan said.

All the three tracks chosen by Dylan are from The Eagles’ most successful album “Hotel California”, released in 1976. The record is one of the best-selling of all time, with an estimated amount of more than 32 million copies sold worldwide. The band’s line-up at that time consisted in: Don Felder, Glenn Frey, Don Henley, Randy Meisner and Joe Walsh.

Warren Zevon “Lawyers, Guns and Money”, “Boom Boom Mancini”,”Join Me In L.A.” and “Desperado Under the Eaves”

Another American Rock and Roll artist that Dylan admires is the late Warren Zevon. Talking in 2009 with the MTV producer Bill Flanagan in 2009, the artist named some of his favorite songs from Zevon.

‘Lawyers, Guns and Money,’ ‘Boom Boom Mancini.’ Down hard stuff. ‘Join me in L.A.’ Sort of straddles the line between heartfelt and primeval. His musical patterns are all over the place. Probably because he’s classically trained.”

“There might be three separate songs within a Zevon song. But they’re all effortlessly connected. Zevon was a musician’s musician, a tortured one. ‘Desperado Under the Eaves.’ It’s all in there,” Bob Dylan said.

Zevon started his musical career in 1965 but only achived greater fame in 1978 with his classic album “Excitable Boy” that had the hit “Werewolves Of London”. His career was cut short at the age of 56 back in 2003 when he died victim of cancer.

John Prine was an important American Country-Folk songwriter that was known for his sometimes humorous style of original music that were mixed with protests and social statements. During the same conversation with Bill Flanagan in 2009, Dylan praised Prine and revealed that his favorite song from the artist is “Lake Marie”, released on his 1995 album “Lost Dogs and Mixed Blessings”.

“Prine’s stuff is pure Proustian existentialism. Midwestern mindtrips to the nth degree. And he writes beautiful songs. I remember when Kris Kristofferson first brought him on the scene.”

“All that stuff about ‘Sam Stone’ the soldier junky daddy and ‘Donald and Lydia,’ where people make love from ten miles away. Nobody but Prine could write like that. If I had to pick one song of his, it might be ‘Lake Marie.’ I don’t remember what album that’s on,” Bob Dylan said.

Jimmy Buffett “Death of an Unpopular Poet” and “He Went to Paris.”

In the same chat with Bill Flanagan in 2009, Dylan named Jimmy Buffett as one of his favorite songwriters and revealed two of his favorites songs from him: “Death of an Unpopular Poet.” There’s another one called “He Went to Paris,” he said.

Both songs mentioned by Dylan are from Jimmy Buffett’s classic 1973 album “A White Sport Coat and a Pink Crustacean”, the third one from his career.

Even though Buffett’s career was not a big commercial success, he is one of the richest musicians in the world with a networth of 900 million dollars. The reason why is that he is a best-selling author and he was involved in two successful restaurant chains named after two of his songs. They are “Margaritaville Cafe” and “Cheeseburger in Paradise” (That no longer exists).

Gordon Lightfoot “Shadows,” “Sundown,” “If You Could Read My Mind.”

The famous Canadian songwriter Gordon Lightfoot is another artist that Dylan admires as he told Bill Flanagan in 2009. When asked if he and Lightfoot knew each other since the early days, he said: “Oh yeah. Gordo’s been around as long as me,” and continued revealing some of his favorite tracks of him. “Shadows,” “Sundown,” “If You Could Read My Mind.” I can’t think of any I don’t like,” Dylan said.

Gordon Lightfoot started his career in 1958, three years before Dylan. He is considered one of the most important artists that helped to define the Folk-Pop sound of the 60s and 70s.

Even though he started earlier that Dylan, he released his debut album “Lightfoot!” in 1966, four years after Dylan’s first. Until now, the Canadian artist have released 19 studio albums and three live records.

“Surfin’ Bird” is one of the most famous Surf Rock hits of all time and it was released in 1963 as a single by the American band The Trashmen, founded in Minneapolis, Minnesota one year earlier. Curiously, Dylan was also born in the same state and started his career one year before them. The musician said in a conversation with Interview magazine back in 1986, that in his opinion that track was a “great minor masterpiece”.

Talking with Bill Flanagan back in 2017, Bob Dylan talked about the city of Minneapolis and said that he wasn’t surprised that “Surfin’ Bird” was born in there.  “Minneapolis and St. Paul – the Twin Cities. They were rock and roll towns. I didn’t know that. I thought the only rock and roll towns were Memphis and Shreveport. In Minneapolis they played northwest rock and roll, Dick Dale and the Ventures. The Kingsmen played there a lot, The Easy Beats, The Castaways. All surf bands, high voltage groups.”

“A lot of Link Wray stuff like ‘Black Widow’ and ‘Jack the Ripper.’ All those northwest instrumentals like ‘Tall Cool One.’ ‘Flyin’ High’ by the Shadows was a big hit. The Twin Cities was surfing rockabilly. So all of it cranked up to ten with a lot of reverb; tremolo switches, everything Fender. (Also) Esquires, Broadcasters, Jaguars, amps on folding chairs. The chairs even looked Fender. Sandy Nelson drumming. ‘Surfing Bird’ came out of there a little while later. It didn’t surprise me,” Bob Dylan said.

Another song that Dylan told Interview magazine in 1986 that was a “great minor masterpiece” was Ricky Nelson‘s “Lonesome Town”, released by the musician on his 1958 album “Ricky Sings Again”.

Curiously, a few years later in 1972, Ricky Nelson mentioned Bob Dylan in the title-track of his album “Garden Party”, saying: “Much to my surprise. Mr Hughes hid in Dylan’s shoes, wearing his disguise. But it’s all right now,
I learned my lesson well”.

Talking with Bill Flanagan in 2017, Dylan was asked which song that he was mentioned in that he liked the most. Besides the one from Nelson, the interviewer cited John Lennon‘s “Yer Blues” and David Bowie‘s “Song For Bob Dylan”. However, the songwriter chose Nelson’s “Garden Party” as his favorite.

On his 2004 book “Chronicles: Volume One”, Bob also praised Nelson. He said that he was different from the teen idols of his era. Saying that Nelson sang his songs in a “calm and steady” way like he was “in the middle of a storm, men hurling past him.”

“His voice was sort of mysterious and made you fall into a certain mood. I had been a big fan of Ricky’s and still liked him. But that type of music was on its way out. It had no chance of meaning anything,” Bob Dylan said.

Released in 1957 by Larry Williams, “Bony Maronie” is another song that Dylan told Interview magazine in 1986 that was a “great minor masterpiece”.

At the time of it’s release, the song peaked at number 14 on the Billboard Hot 100 and number 4 on the USA R&B chart. The track was later on covered by famous artists like John Lennon, Bill Haley, Ritchie Valens, Dick Dale and Johnny Winter.

Curiously, Larry Williams is best-known for the song “Dizzy, Miss Lizzy”, covered by the Beatles in 1965 on their album ”

Another famous Larry Williams song is “Dizzy, Miss Lizzy” that was covered by The Beatles in 1965, being featured on the album “Help!”.

Randy Newman “Sail Away,” “Burn Down the Cornfield” and “Louisiana”

Randy Newman is another American composer that Dylan admires as he revealed in the interview with Bill Flanagan in 2009.  “Yeah, Randy. What can you say? I like his early songs, ‘Sail Away,’ ‘Burn Down the Cornfield,’ ‘Louisiana,’ where he kept it simple. Bordello songs. I think of him as the Crown Prince, the heir apparent to Jelly Roll Morton. His style is deceiving. He’s so laid back that you kind of forget he’s saying important things. Randy’s sort of tied to a different era like I am,” Bob Dylan said.

The singer, arranger, composed and pianist Randy Newman is known for his southern-accented singing style and the inspiration that he took from the early Americana songs and film themes.