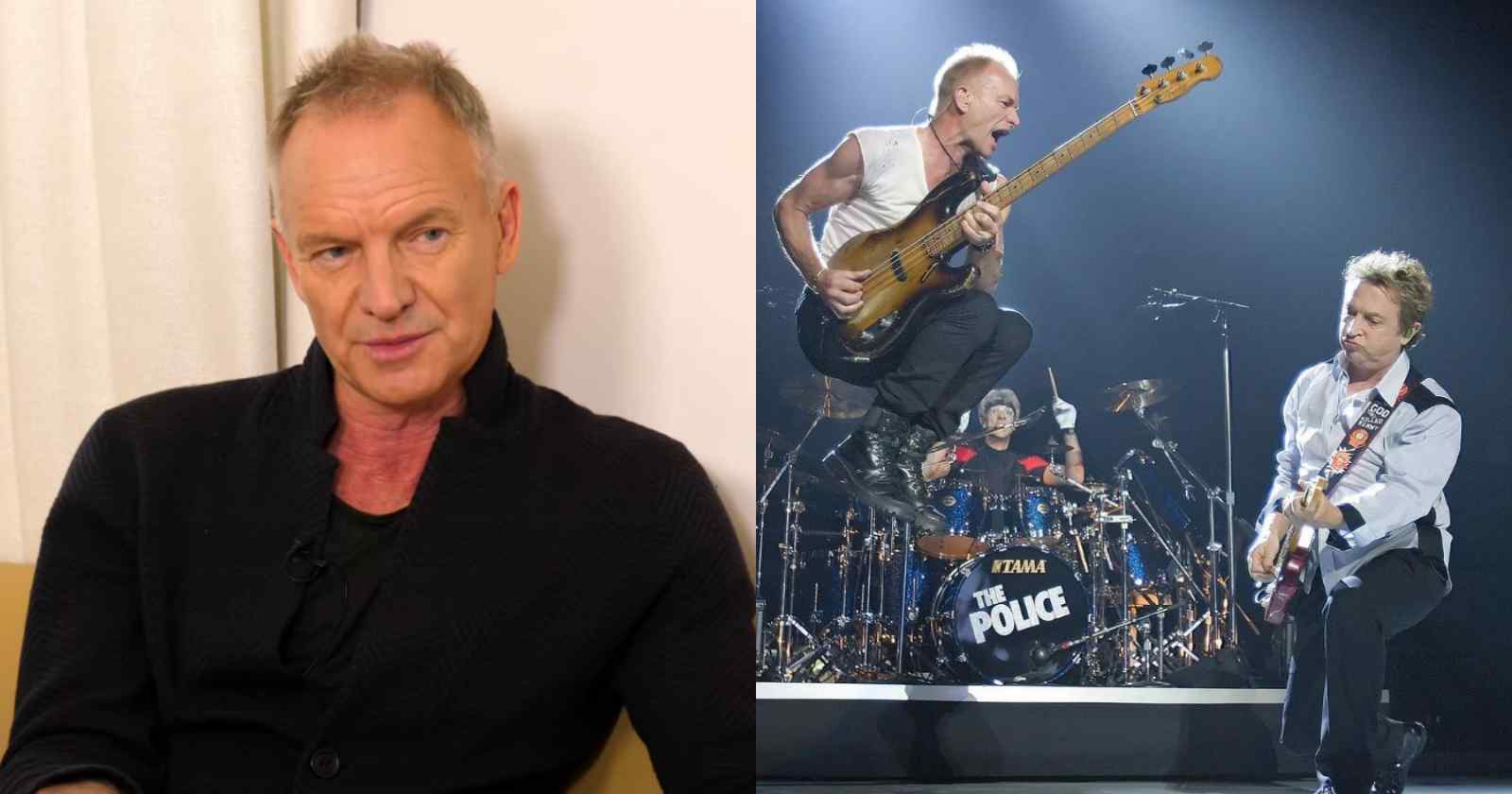 Sting first achieved fame with The Police, band he helped to become one of the best-selling of all time with an estimated amount of 75 million records sold worldwide. Then he started an also successful solo career, collaborating over the years with many other famous artists. His songwriting always mixed many different music genres and his broad musical taste could be seen when in an interview with BBC Radio 2 program “Tracks Of My Years” back in 2021 (Transcribed by Rock and Roll Garage) where he listed 10 songs that are some of his favorites of all time.

Otis Redding “(Sittin’ On) The Dock of the Bay”

“I think I was just 16 and Otis Redding had just died in a terrible plane crash. I went to my record store and bought ‘Dock Of The Bay’ on the Stax label, (there was) a lovely blue label, there was a paper bag and I took it out, put it on my turntable, the usual ritual, put the needle on it and I hear (Imitates the song’s intro). What a wonderful song. I mean, sad, sad song but without any minor chords. It’s all major chords, which is kind of an achievement in many ways.”

“I was asked by the Alzheimer’s Society (Voluntary health organization) to choose a song I would like to remember if I ever suffer from Alzheimer, because people who do suffer from Alzheimer remember songs more than anything else. So to just draw attention to this issue that I re-recorded as what I regard a masterpiece. It actually made me analyze the song and what it’s power is. It was a learning exercise for me to remember the song and pay homage to the great Otis Redding,” Sting said.

Released posthumously in 1968 as single “(Sittin’ On) The Dock of the Bay”‘ became Otis Redding signature song. The talented musician sadly died in a tragic plane accident in December, 1967 at the age of 26. His vocals iinfluenced countless singers from the 60s.

“Procul Harum ‘A Whiter Shade Of Pale’ for me probably encapsulate the whole period of the psychdelia. I wasn’t really involved, I was just a young teen but I remember being in (an) amusement park standing next to the jukebox and playing this song again, again, again and again. There is something about the little organ solo, the beginning which (something like) JS Bach, there is something classical and yet very, very modern and psychedelic about it. Then the lyrics they don’t really make any sense but they just carry you along with the absurdity,” Sting said.

Procul Harum’s most famous song, that often listed as one of the best of all time was first released as a single in 1967 and it reached number 1 in the United Kingdom chart, staying on top for six weeks. In the United States it reached number 5 on the Billboard Hot 100. It sold an estimated amount of 10 million copies worldwide.

Bob Marley & The Wailers “No Woman, No Cry”

“Bob Marley was a huge influence on me in the 70s. Loved his voice, loved his songwriting, loved the whole Jamaican vibe. I’ve met Bob, I had dinner with him one night, he treated everybody in a very nice way but he was also the king. I’ve learned a great deal from him and ‘No Woman, No Cry’ influenced me to write ‘So Lonely’, it’s the same chords. Musicians are thieves, we steal whenever we can. But Bob Marley still (is) a major influence on my life, even though he has been gone for many years,” Sting said.

The track was first released by Bob Marley, the most famous and influential reggae musician in history, on his 1974 album with The Wailers “Natty Dread”. It was their seventh album and is often regarded as one of the most important ones from Marley.

“Again, this was a time I was living in London, I used have the radio on a lot and there were two hits that year, one of ‘Wuthering Heights’ and the other one was Gerry Rafferty‘s ‘Baker Street’. That saxophone solo in the beginning completly destroyed me. It made me wish that I was in the charts too, because these were number one records. (I thought) ‘What it must be like to have a number one record?’ It was only a few months later that we had a song in the charts so I must have been dreaming really hard. But I just remember that wonderful song, it captures so much of that time for me,” Sting said.

“You know, Neil Tennant and I went to the same school in Newcastle. We didn’t know each other, he was a couple years younger than me. I didn’t really meet him until he was a journalist for Smash Hits, I think. He interviewed me and he revealed to me that he and I have been in the same school together. Then lo and behold he has this massive hit. Again, an iconic song fromt he perido, ‘West End Girls’, the synthesizer, the feeling. I mean, it’s a great, great pop song,” Sting said.

First released as a single in 1984 by the synth-pop duo Pet Shop Boys, formed by Neil Tennant (Vocals) and Chris Lowe (Keyboards), “West End Girls” is one of their most famous tracks. They are also known for “Always On My Mind”, “It’s A Sin”, “Go West” and “Domino Dancing”.

“George was a friend of mine, we were not close but I really admired him from the pop stardom from When to then coming a very, very well respected and serious songwriter and artist. I often wonder where George would be right now. What kind of music he would be creating. It’s a big regret that George didn’t progress with his music. Very sad, but ‘Careless Whisper’ is a great song. I love that line ‘guilty feet have got no rhythm’. It’s the kind of thing I wish I have written myself,” Sting said.

Relased by Wham!, pop duo from which George Michael was part of, in 1974 on their album “Make It Big”, “Careless Whisper” is the most famous track from them. Like “Baker Street”, listed by Sting previously, it also has one of the most famous saxophone riffs in the history of music. At the time of the release the track reached number on in nearly 25 countries.

“We’ve made a session for the BBC with The Police a support act that day and they were called The Tourists. (They were) of course Annie Lennox and Dave. I remember taking note of them and of course Annie left that band. She toured with me, we spent a lot of time backstage and she said to me: ‘Oh, I’m so nervous, I don’t know how you do it’. She had this proccess of worrying before she would go on stage and then become this amazing (diva), with this amazing voice. That was her proccess. But I love her dearly, I think she was a very important woman and artist. I just love her,” Sting said.

Antoher famous pop duo from the 80s, Eurythmics was formed by Annie Lennox and Dave Stewart. ‘Here Comes The Rain Again’ was the opening track of “Touch” (1983), their third studio album. It was the record that followed their most famous one: “Sweet Dreams (Are Made Of This)” (1983).

The Human League “Don’t You Want Me”

“‘Don’t You Want Me’ baby is one of my karaoke songs. I do actually go to karaoke ocasionally, I enjoy it. That’s the song I choose. I love the line ‘you were working as a waitress in a cocktail bar’, it always gets people heads turned,” Sting said.

Another Pop anthem from the 80s, “Don’t You Want Me” was first released by Human League as a single in 1981, also being featured on their third studio album “Dare”. The track became the biggest selling UK single of that year.

“Peter and I met on the Amnesty tour, with U2, Youssou N’Dour, me and Peter, then Bruce (Springsteen) joined us. But we really forged a friendship there. Even though we have very different kind of upbringing. I admire his work with Genesis and his solo work I was very much a fan of. ‘Sledgehammer’ was this huge mighty hit then Peter and I toured America together, we had a very successful tour.”

One of the most successful songs from Peter Gabriel‘s solo career the track was featured on the musician’s praised 1986 album “So”. The incredible official video made for the track became one of the most played videoclips on MTV at the time. It won nine MTV Video Music Awards at the 1987 ceremony.

Shaggy “It Wasn’t Me”

“Sometimes you meet somebody and they might be very different from you, very different backgrounds but you recognize kindred spirit. Shaggy and I we genuinely love each other. We laugh at the same jokes, I find him an intensively interesting artist. When he raps he declames like a Shakespearean act, it’s a beautiful voice. And he writes these kind like moral parables (laughs). ‘It Wasn’t Me’ kind of have a morality to it. We did it in a German church and I had to explain the pastor what exactly the message was. I’m not sure how successful I was but it’s very funny,” Sting said.

First released by the Jamaican-American singer Shaggy on his fifth album “Hot Shot” in 2000, the hit “It Wasn’t Me” appeared on the charts from several countries that year. As Sting said, over the years they became friends and recorded together.