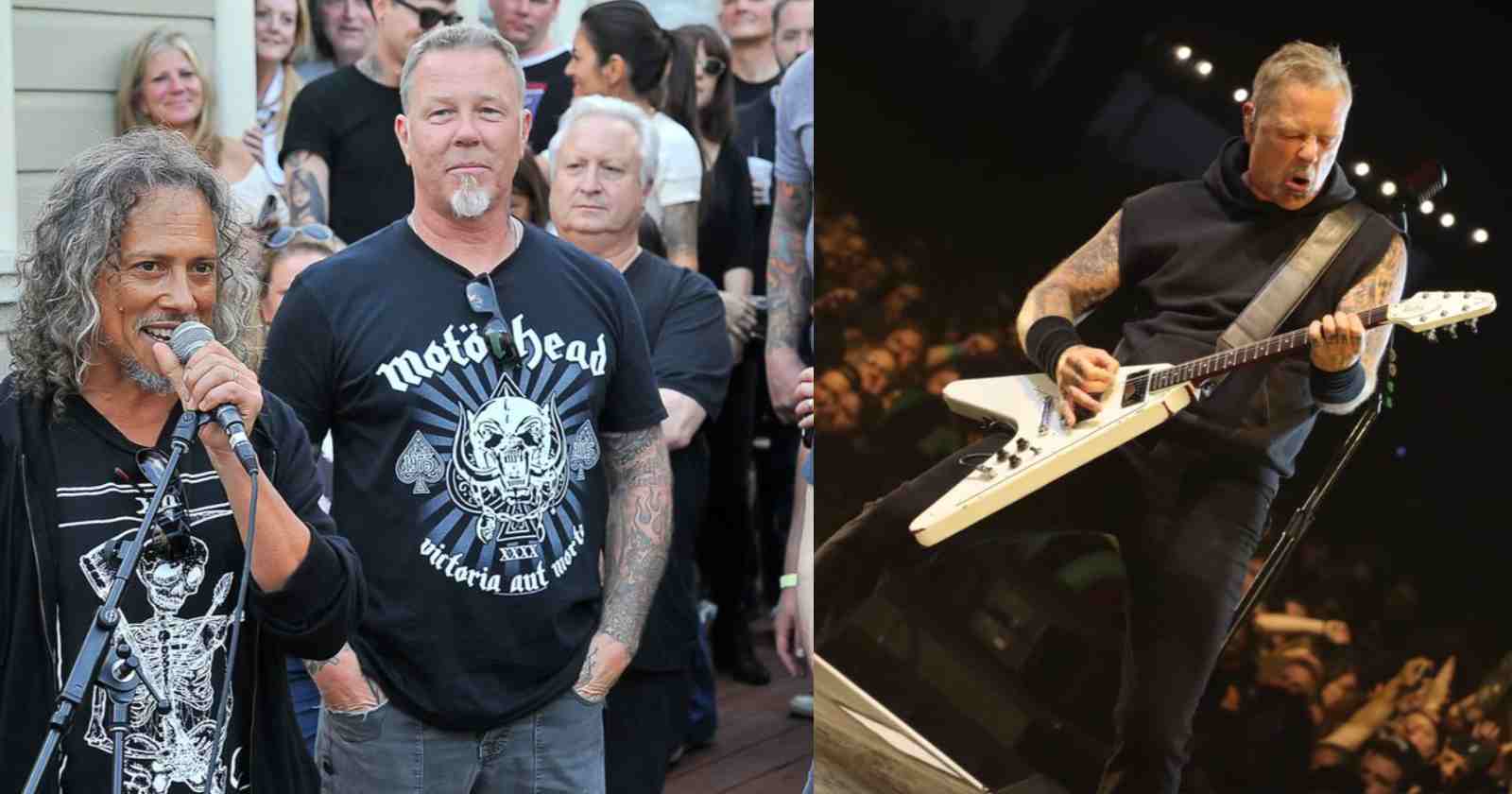 Metallica guitarist and singer James Hetfield helped the band to create many classic Heavy Metal riffs over the decades and in an interview with Newsweek back in 2017 he named 4 guitarists that were an inspiration when he was becoming one. Hetfield picked especially rhythm guitar players and those known for guitar riffs.

4 guitarists that Metallica’s James Hetfield said that inspired him

“So guitar influences for me—really percussive. As I mentioned earlier, I’d love to play drums too (laughs), you know? What I do is play drums on the guitar. I’m very rhythmic, and obviously I’m a rhythm guitar player, so there’s some great rhythm guitar players out there: Malcolm Young (AC/DC) obviously. Rudolf Schenker (Scorpions) and I would say Johnny Ramone (The Ramones) had just a great right hand: a lot of down picking, da-da-da-da (he sings a guitar down-picking part), really machine-like.”

“I just gravitated toward that. And obviously the musicality of a riff: Somebody like a Tony Iommi (Black Sabbath), who is the ultimate riff master in my opinion—so a combination of heavy and great melodies within the riffs.”

James Hetfield saw Malcolm Young playing live back in back in 1978 when he was 15. The Metallica frontman recalled in an interview with Classic Rock back in 2009 that moment: “That was the first concert I went to – Aerosmith and AC/DC at the Long Beach Arena (July 12, 1978)”.

James Hetfield celebrated Rudolf Schenker’s 70th birthday back in 2018 recording a special message to the guitarist, saying: “I appreciate you and all that you contributed to the music world and Metal in general. (I’m) glad that you are still out there kicking ass. Happy 70th birthday to you. Us rhythm players got to stick together, so stay safe out there and I hope you don’t have a ‘blackout’! (Hetfield than imitates Schenker on the album cover of the ‘Blackout’ record)”.

Rudolf talked about Metallica in an interview with Music Radar back in 2010, saying that Scorpions were just like them: “Look at bands like Metallica. When they began, they were trash and they couldn’t play their instruments. But over the years they became a classic rock band because they learned how to play. They play extremely well now.”

“So we’re just like Metallica – classic rock! We fit in right with that. It feels good to be a part of what’s happening again.”

Back in 1992 Guitar World magazine made an interview with Tony Iommi and James Hetfield, when the Metallica frontman finally had the chance to meet Black Sabbath’s riffmaster and Iommi praised him, saying:  “My son bought me your last album (Metallica/Black Album), and it’s one of the first recordings I’ve received in a long time that I can praise without reservation. I listen to it in my car all the time.”

Besides covering Black Sabbath’s “Sabbra Cadabra/National Acrobat” on their 1998 covers album “Garage Inc.”, James Hetfield and Lars Ulrich were the ones who inducted the band that founded Heavy Metal into the Rock and Roll Hall of Fame back in 2006. In his speech at the ceremony, Hetfield said: “Black Sabbath is mammoth riffs with menacing lyrics that make me ‘oh so happy’ that was going to be my speech and that was it, but Springsteen kind of upped the ante last year.”

“I’ll go a little deeper, picture a 9 year-old boy, quiet, well behaved on the outside but on the inside boiling and dying for life to burst open with any sort of stimulation and the discovery of music was what was to burst it wide open, but not just any music. This was more than just music, a powerful loud heavy sound that moved his soul.”

In an interview with Howard Stern in 2020, Metallica credited Punk Rock for the band’s longevity, because they were never worried about everything being perfect all the time and Hetfield recalled that they had the chance to play with them at Lollapalooza and according to him it “was such a treat”. Metallica covered the song “53rd & 3rd” for The Ramones 2003 tribute album “We’re A Happy Family: A Tribute to Ramones”.