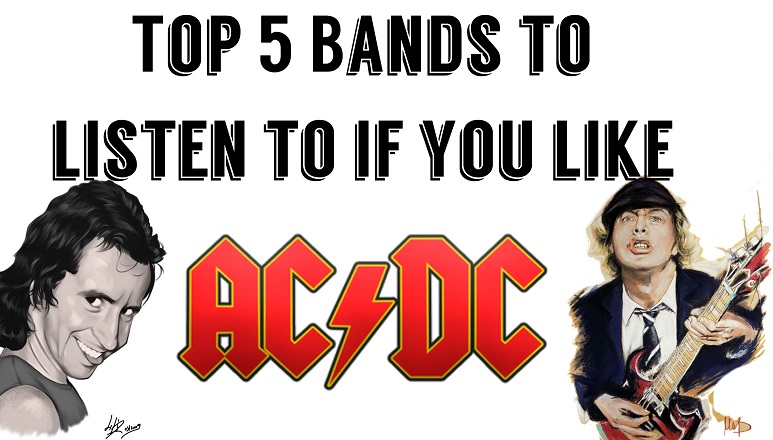 AC/DC is probably the Beatles from Hard Rock, you can’t deny that they are probably the biggest band from the genre, or at least on the Top 5 and that they had inspired millions of musicians around the world.

With Phill Rudd on drums, Cliff WIlliams on the bass, the brothers Malcolm Young (Base guitar) and Angus Young (Lead guitar) and until 1979 the late legendary singer Bon Scott, that was the first voice of the band powerful sound. The band continued to make history with singer Brian Johnson after the release of Back In Black (1980).

Well, since we all love AC/DC, why not make a list of bands that sounds like them?

Airbourne is an Australian hard rock band formed in Warrnambool in 2003. Mainstay members are Joel O’Keeffe on lead vocals and lead guitar, and his brother Ryan O’Keeffe on drums. They were later joined by Justin Street on bass guitar and backing vocals. David Roads (on rhythm guitar and backing vocals) was also a mainstay member until leaving the band in April 2017 – Harri Harrison was announced as his replacement.

Their debut album, Runnin’ Wild, was released in June 2007 and peaked in the top 30 on the ARIA Albums Chart. It appeared on the United Kingdom Albums Chart and United States Billboard 200. By August 2013, it was certified with Silver award by BPI. Their second album, No Guts. No Glory.

They are a British rock band formed in 1983. Before settling on their current name in January 1984, the band performed under the name Death Cult, which was an evolution of the name of lead singer Ian Astbury’s previous band Southern Death Cult.

According to music critic Stephen Thomas Erlewine, the band fuse a “heavy metal revivalist” sound with the “pseudo-mysticism … of The Doors [and] the guitar-orchestrations of Led Zeppelin … while adding touches of post-punk goth rock”. Since the initial formation of Southern Death Cult in Bradford in 1981, the band have had various line-ups; the longest-serving members are Astbury and guitarist Billy Duffy, the band’s two songwriters.

They are a hard rock and heavy metal band from Switzerland. They enjoyed great success in North America during the 1980s.

Krokus were founded in Solothurn in 1975 by bassist/keyboardist/percussionist (and original drummer, and then lead vocalist) Chris von Rohr and guitarist Tommy Kiefer. Former TEA vocalist Marc Storace joined the band as frontman in time for their Metal Rendez-vous album in 1979.

The band name Krokus is German for crocus, a flower common throughout Europe. Early in the spring of 1975, band founder Chris von Rohr observed a field of these flowers while traveling by train. He was returning from L’Ecole des Chefs located in France after an aborted career in the culinary arts, and it was around this time the idea for the band was formed. The band members stated that it was the perfect name, since it featured “rok” in the middle.

Accept are a German heavy metal band from the town of Solingen, originally assembled by former vocalist Udo Dirkschneider, guitarist Wolf Hoffmann and bassist Peter Baltes. Their beginnings can be traced back to the late 1960s. The band played an important role in the development of speed and thrash metal, being part of the German heavy metal scene, which emerged in the early to mid-1980s.

The Darkness came to prominence with the release of their debut album, Permission to Land, in 2003. Backed by the singles “I Believe in a Thing Called Love”, “Growing on Me”, “Get Your Hands off My Woman”, and “Love is Only a Feeling”, the album was certified quadruple platinum in the United Kingdom, with sales of over 1,300,000. In 2004 the band won three Brit Awards: Best British Group, Best British Rock Act, and Best British Album.

After extensive touring in support of their debut album, Poullain left the band in 2005, and was replaced by former guitar technician Richie Edwards. The band’s second studio album, One Way Ticket to Hell… and Back, was released in November 2005. The following year, Justin Hawkins departed from the band after successfully completing a course of rehabilitation from alcohol and cocaine abuse. As a result, the remaining members formed Stone Gods, and continued to perform and record without Hawkins, who subsequently fronted his own project, Hot Leg.