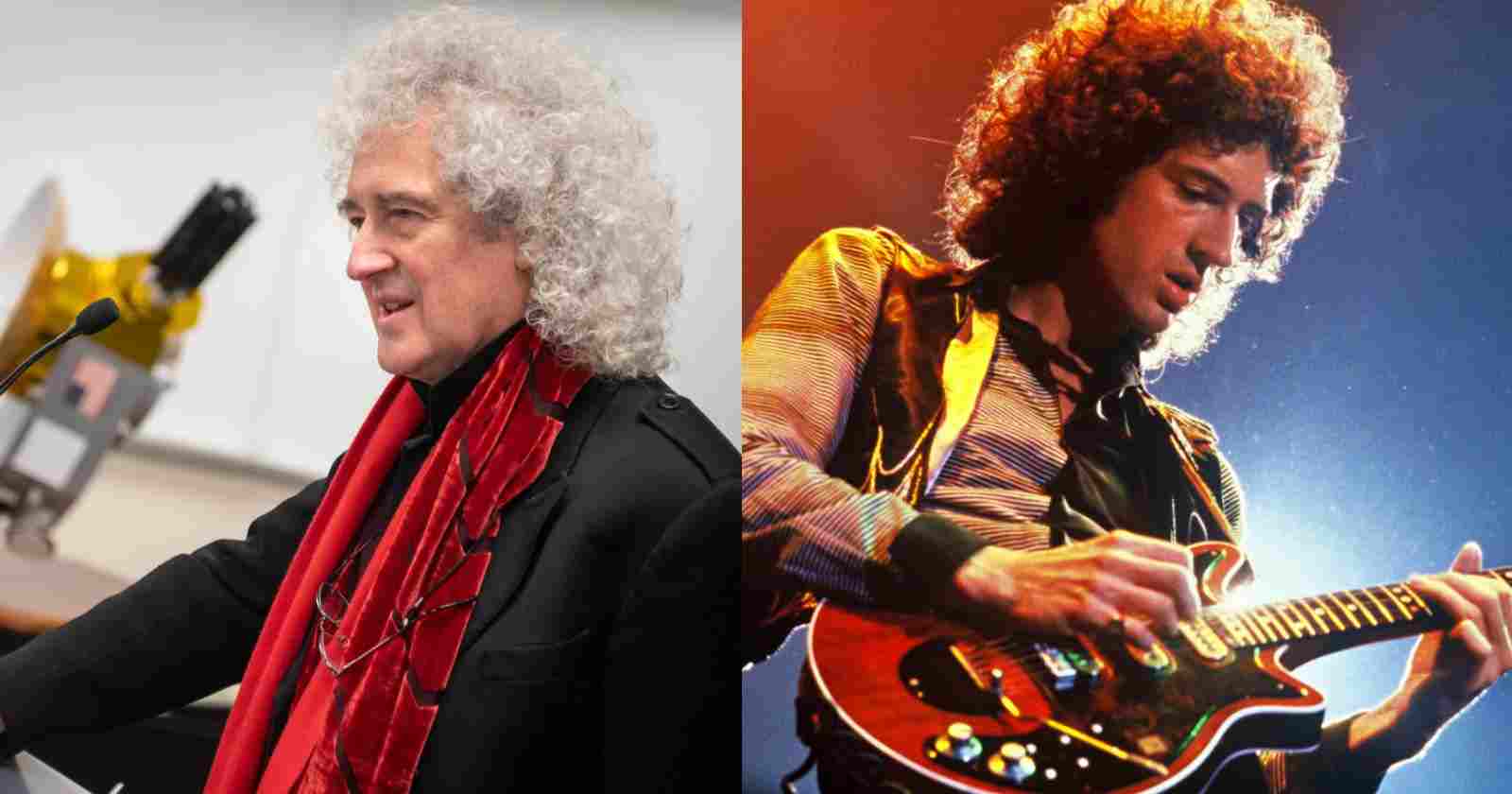 Legendary Queen guitarist Brian May revealed in an interview with BBC Radio back in 2002 the 8 songs he would take to a desert island and explained why he loves them so much. He is considered by Rolling Stone magazine the 26th best guitarist of all time.

“My special field was The Motions of Interplanetary Dust and I studied something called the Zodiacal Light, which is how you do that. Urm… it’s very beautiful. I mean, I think I liked Astronomy – well I know that it was from very early on – and I read one of Patrick Moore’s books and I was hooked forever and I still am.”

“I’m still completely hooked into Astronomy, and when I was a kid I wrote a Monologue, which I used to – um – perform to this particular piece of music, called ‘Saturn – The Bringer Of Old Age’. Now its much more appropriate now. [laughs] Seems old age is getting very close, but it, it’s not a, its not a pessimistic thing at all.”

“Its, its, you can hear a relentlessness in this music and a kind of timeless quality which makes you feel like you’re, you’re kind of walking into Eternity. And I think its a wonderful thing to, to hear, as you’re looking up at the stars,” Brian May said.

“The first thing I remember was, my Dad brought a Lonnie Donegan record home, um, with the sound of the guitar and the voice and that sort of Blues feeling – and Lonnie was really the first person who brought, who brought Blues into England.”

“Then I used to lay under the covers with my little crystal set um listening to Radio Luxembourg and all the stuff which seemed very exciting and dangerous and forbidden – all those American records.”

“So it was The Everly Brothers, Elvis I suppose, Little Richard, and Buddy Holly and The Crickets. First time I heard Buddy Holly was just chills up the spine and an electricity which I still have, and that’?,” Brian May said.

Smokey Robinson & The Miracles “The Tracks Of My Tears”

“This doesn’t sound very rock ‘n’ roll really. Its Smokey Robinson And The Miracles and this really took me all through my college days. I was at Imperial College doing Physics Degree and then Astronomy Second Degree, and I was very lonely. My first proper relationship had broken up and I thought it was the end of the world.”

“This was the girl that I was convinced I was going to marry from the age of sixteen. I’m smiling now, but I wasn’t then, you know, [laughs] and I think I saw myself as this great tragic figure and every time I heard this record it seemed to sort of move me into a place where I felt comfortably sorry for myself, as opposed to [laughs] uncomfortably, and I thought that the singer was a girl.”

“I kind of fell in love with the voice, and it was much later that I got the record that I thought ‘Well, where is Smokey on the front of here?’ I imagined her as being this sort of dusky maiden and it turned out to be a bloke, [laughs] which is very strange but I still think it’s one of the most fantastic voices in the history of popular music – Smokey Robinson.”

“And I think – you know the song is everything, the song and the singer. Okay, and its called ‘The Tracks of My Tears’. Still gets me every time, yeah. That’s what made me wanna write songs, you know, connection from heart to heart that can really grab you,” Brian May said.

The Babys “Back on my Feet Again”

“This is well into Queen-time that this happened to me. This is called ‘Back On My Feet Again’, and its by a little-known group called The Babys. But this was my pick-me-up when I was in Munich much later on.”

“Some hard times, which I won’t go into, but generally we used to drink till dawn. Around dawn-time my fantastic tech, who was called Jobby, Brian Zellis, at the time, used to drive me home and I’d generally be pretty sad [laughs] for one reason or another. He’d put this on the car radio, and this would pick me up. I’d be like punching the air, and I’d be, I’d be ready for everything again,” Brian May said.

“Well, one of the most wonderful things you can experience. The next one [laughing] – record number 5 is my darling wife, as she is now – she wasn’t then – and she’s singing ‘To Know Him Is To Love Him’.”

“Now this is a re-creation of a Phil Spector song, originally done by The Teddy Bears, and the original’s damn, damn, good. But I’d have problems being on this desert island without her. you know. I would you know, it’s really – she’s such a big part of my life.”

“She’s kind of welded to my soul and I would need to be able to hear her voice on the island, so I’ve chosen this, and there’s a bit of me playing the guitar on this as well, which I don’t often hear, I must say.”

“But it was a moment – a moment of sort of wonder and terror I suppose, and magic and tragedy. Because my marriage was breaking up. I didn’t know it at this time. But it was, and I was, we were irresistibly heading towards each other and trying to resist. But these things you can’t resist.”

“There are certain things in life which you don’t have control over. I have discovered, and you can fight and you can struggle. But basically it happens and I’m happy to say we are married now, which is great. But this is when we were children really. [laughs],” Brian May said.

“Again it’s a big uplift, ‘cos I’m on this desert island and I’m gonna get moments when I’m gonna get blue. This always gets me – gets me up,” Brian May said.

“Well I figure on this island there’s moments when I just need to get up and, and let it all explode out of me and do some Air Guitar. I’ll go to the highest point in the island and scream and shout and wave the fist in the air and this will be the record which I need to have with me. [chuckle]

Interviewer: Why does Brian May need to do Air Guitar, for heaven’s sake? That’s for the rest of us.

“Oh, it, it’s fun really, I suppose. It’s just a body thing [laughs]. AC/DC to me are THE purest form and there’s nothing like an AC/DC concert to sort of clear you out and bring you back to basics. I love it,” Brian May said.

“This was a last-minute thought. I wasn’t gonna put anything of our own in, but it does seem like a good idea. I’m proud of what we did in Queen. It was a great journey and it’s left the world with something and ‘We Will Rock You’ is heard all around this planet, at football matches and whatever, baseball matches, and in the streets. It’s something that I am proud of.”

“I must say that every time I hear it, I think ‘Ok, you know, at least something is there when I go’ and it’s something which does bring people together – make people feel uplifted and strong.”

“It’s kind of a little protest song in its way, ironically, but it is a thing of strength. So it’ll help me too on the island and I’ll think ‘Yeah, I have this link still’ and somewhere, someplace this is being sung of performed. So this is ‘We Will Rock You’,” Brian May said.