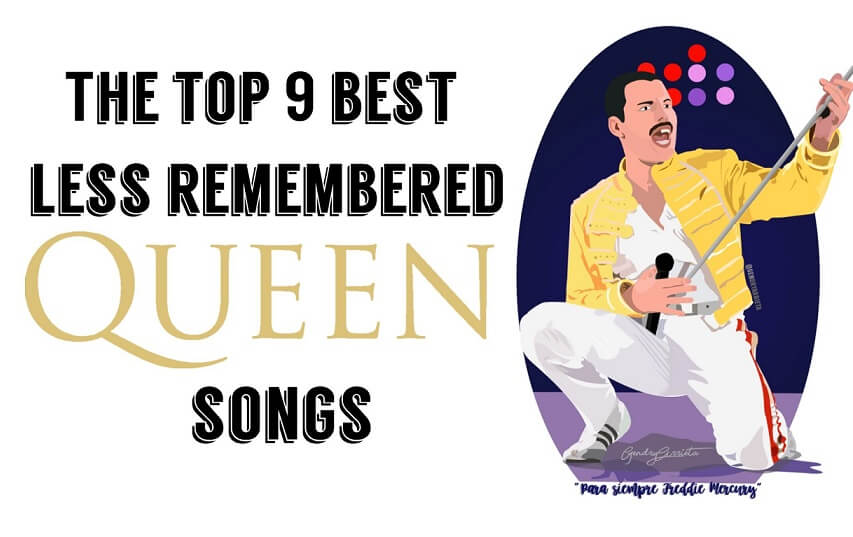 Queen is a unique band and now is getting discovered by new generations more than four decades after they beginning with their biopic “Bohemian Rhapsody”. And for people that are tired of hearing their biggest hits, we made a list to remember their less remembered songs.

“Stone Cold Crazy” is from Queen’s 1974 album Sheer Heart Attack. The song is the eighth track on the album. Although the song was not released as a single at the time, it was played live at almost every Queen concert from 1974 to 1978.

The song credit is shared between all the members of the band, although Freddie Mercury played it with his band Wreckage in the late 1960s before Queen was created. The recorded version may be lyrics from Mercury and music from Mercury and Brian May.

“’39” was composed by lead guitarist Brian May, it is the fifth track on their fourth studio album A Night at the Opera. The song was also the B-side to “You’re My Best Friend”.

“Tie Your Mother Down”

“Tie Your Mother Down” was written by lead guitarist Brian May. It is the opening track and the second single from their 1976 album A Day at the Races. On its original release as a single in 1977 the song peaked at 31 in the UK Singles Chart, however more than 20 years later it was released as a double a-side to “No-One But You (Only the Good Die Young)” where it reached 13 in UK Singles Chart.

On the album the song is preceded by a one-minute instrumental intro featuring a Shepard tone melody, which is reprised in the ending of “Teo Torriatte”: this was intended to create a “circle” in the album, typical, for example, of Pink Floyd’s albums.

“Fat Bottomed Girls” was written by guitarist Brian May, the track featured on their 1978 album Jazz and later on their compilation album Greatest Hits. When released as a single with “Bicycle Race”, the song reached number 11 in the UK Singles Chart and number 24 in the Billboard Hot 100 in the US.

The song is formed around an open bluesy, metallic guitar tuning, and opens with its chorus. It was one of the few Queen songs played in an alternative (drop D) guitar tuning. The song’s music video was filmed at the Dallas Convention Center in Texas in October 1978.

“Play the Game” was written by Freddie Mercury. It is the first track on the first side of their 1980 album The Game. It also appears on their Greatest Hits album. The song commences with a series of overlapping rushing noises on an Oberheim OB-X synthesiser, heralding the band’s acceptance of electronic instruments into their once explicitly “no synths” sonic repertoire. They played it in their live shows from 1980-82. The single was a hit in Queen’s home country reaching #14 in the charts. In America, it peaked at #42.

“Flash” was written by guitarist Brian May and is the theme song of the 1980 film Flash Gordon.

There are two versions of the song. The album version (“Flash’s Theme”) is in fact the start to the movie, with all the dialogue from the first scene. The single version contains dialogue cut from various parts of the movie, most memorably, Brian Blessed’s character exclaiming “Gordon’s alive?!” This version was also included on the Greatest Hits compilation from 1981.

Flash is sung as a duet between Freddie Mercury and Brian May, with Roger Taylor adding the high harmonies. May plays all of the instruments except for the rhythm section. He used an Imperial Bösendorfer Grand Piano (with 97 keys instead of 88, having an extra octave on the low range), Oberheim OBX synth (which he plays in the video) and his homemade Red Special electric guitar.

“One Vision” was first released as a single in November 1985 and then included on their 1986 album A Kind of Magic. It was originally conceived by Roger Taylor.

The song has been speculated to be inspired by either the band’s “show-stopping” performance at Live Aid earlier in 1985, or by the life and exploits of Martin Luther King, with the lyrics recounting a man battling and overcoming the odds.

“The Miracle” is the fifth and final single from Queen’s 1989 studio album of the same name. It was composed by the entire band, though Freddie Mercury and John Deacon were the main writers. And was released as a single in late November 1989, some six months after the album. It was the last of the singles from that album to be released, and the first 5th single released from any of Queen’s albums from EMI.

The idea for the song came from Freddie Mercury and John Deacon, who wrote the basic chord structure for the song. All four contributed to the lyrics and musical ideas, and the song was still credited to the entire band because they had agreed to do so during the album recording, regardless of who had been the actual writer.

“No-One But You (Only the Good Die Young)” is a song recorded by the remaining three members of the British rock band Queen in 1997 following the death of the lead singer Freddie Mercury in 1991. Guitarist Brian May – the writer of the song – and drummer Roger Taylor share lead vocals.

The impetus for the song came after the death of Diana, Princess of Wales in August 1997. But is largely a eulogy to Freddie Mercury. It was dedicated to Mercury and all those who die too soon.[1] It was originally written for a potential Brian May solo project, which eventually evolved into the album Another World.