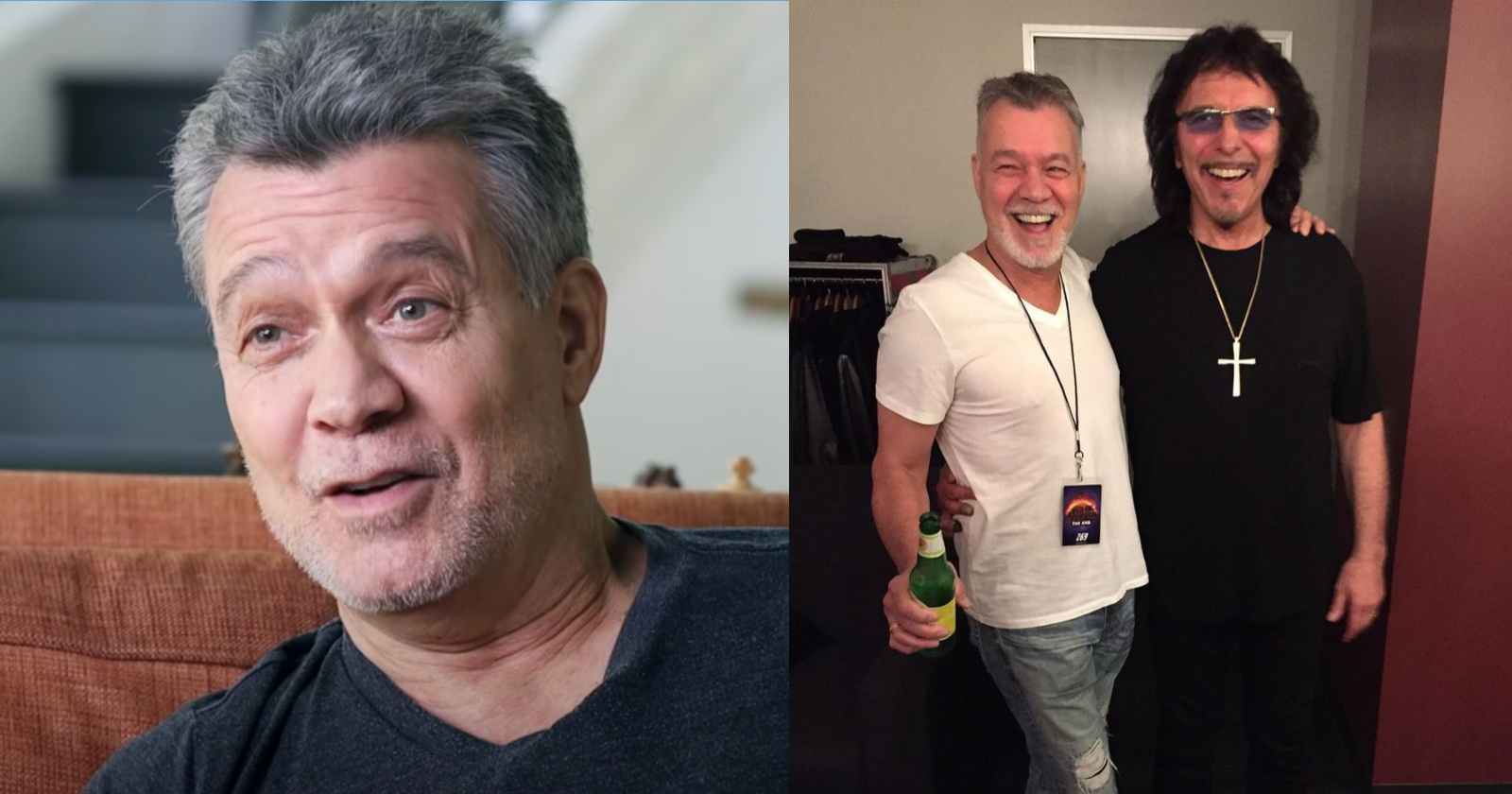 Eddie Van Halen changed the way of playing the electric guitar in the late 70s and inspired millions of musicians, making Van Halen one of the best-selling bands of all time with more than 80 million records sold worldwide. When developing his unique style he was influenced by many famous guitarists as he revealed in interviews over the years. Rock and Roll Garage selected 6 guitar players that Eddie Van Halen listed in interviews as influences.

The legendary guitairst was inducted as a member of Van Halen into the Rock and Roll Hall of Fame in 2007. But only the singer Sammy Hagar and bassist Michael Anthony went to the ceremony.

The 6 guitarists that Eddie Van Halen listed as influences

Famous for his solo career and also for playing in The Yardbirds, John Mayall & The Bluesbreakers, Cream and Derek & The Dominos, Eric Clapton was Eddie Van Halen’s main influence as he revealed in interviews over the decades.

In an conversation with Guitar World in 1981, Van Halen revealed that he knew in the beggining of his career, every note Clapton had ever played: “Clapton was it. I knew every note he played. That’s what I was known for around home. Me, Alex and another bass player called ourselves Mammoth and we were the junior Cream. The interviewer pointed that Van Halen played Clapton’s solo in “Crossroads” for him and said that it was one of the best live recorded songs of all time.

The guitarist continued explaining why he was influenced by Clapton:

“It’s funny. When I do interviews and tell people Clapton was my main influence, they go ‘Who?’ Because they’re thinking about Clapton doing ‘Lay Down Sally’, not the Bluesbreakers or Cream.”

“I haven’t heard anyone do a long interesting guitar solo outside of early Clapton. I do a guitar solo in the live show which is long. Some people may think it’s boring, but I have fun. Clapton was my favorite,” Eddie Van Halen said.

His love for Cream

In an interview with Rolling Stone in 2011, he revealed that he liked the early work of Eric Clapton with John Mayall & The Bluesbreakers but what he really loved was Clapton’s playing in the supergroup Cream. The musician also said that the albums “Wheels Of Fire” (1968) and “Goodbye” (1969) were some of his favorites of the British group.
In the same conversation he revealed that he liked Cream because he was able to hear exactly what every musician in the band was doing with their instruments during the songs, especially when they played live.

The British jazz fusion and Progressive Rock guitarist Allan Holdsworth, known for his work with U.K, was a musician that inspired Eddie Van Halen when he already had a playing style. When asked by Guitar World in 1993 which was the last guitarist that had an impact on him, he said: “I think the last guitarist who moved me was Holdsworth. Just because he was so out there, y’know?  I wanted to work with him and try to bring him back to earth, so to speak. Make him more accessible, but it never quite materialised. The guy just has some insane technique. If he’d only make it a little more melodic. ”

In 1981 he had already told the same magazine that he respected Holdsworth and said that he was the baddest guitarist at the moment. He also revealed that guitar solo in the song “Crade Will Rock”, released on Van Halen’s 1980 album “Women and Children First”, was inspired by Holdsworth because he was listening to a lot of his work at the time.

He helped Holdsworth get a record deal

As Van Halen recalled in an interview in 1982, made available by SimpsonMusic Productions (Transcribed by Rock and Roll Garage), he helped Holdsworth to get a deal with Warner Brothers at the time, because after meeting the guitarist he discovered that he was having to sell his own equipment to support his wife and kids in England. “I called Ted (Templeman), our producer, and I said ‘God damn it. Check this guy out, he is hot! He might be a little out there, he might be a little spaced out.'”

“Anyway, I got him signed with Warner Brothers. I just had to help him, he was the only one that I get off on. I love the way he plays. He’s got feeling, he’s got a fucking ear that is unbelievable. You could play any chord change once and he could improvised over it.”

Eddie Van Halen was a big Black Sabbath fan and the band Van Halen almost had another name because of their love for the British Heavy Metal band. The guitarist revealed in an interview back in 2013 alongside Black Sabbath guitarist Tony Iommi to Guitar World that originally they would be called “Rat Salad”, inspired by the instrumental song of the same name from the classic album “Paranoid” (1970). “We played just about every Black Sabbath song. I used to sing lead on every Black Sabbath song we did. Things like “Into the Void,” “Paranoid,” and “Lord of This World,” Eddie said.

Since Van Halen toured with Black Sabbath in 1978 as their opening act, Eddie and Iommi became good friends and the guitarist always used to go watch Sabbath whenever he could. In an interview with Rolling Stone in 2011, Van Halen pointed how With Tony Iommi influenced him saying it was with the riffs and the power of the music.

He helped to compose a Black Sabbath song

Tony Iommi revealed in an conversation with Rolling Stone in 2020 that one of Eddie’s favorite Black Sabbath songs was “Into The Void” from the “Master Of Reality” (1971) album. He also recalled he invited Eddie to the studio when Sabbath was recording the 1994 album “Cross Purposes”, where they had a jam session playing Eddie’s favorite Sabbath track.

Iommi also said that Van Halen helped with the composition of the song “Evil Eye” playing the guitar solo. But Iommi revealed he wasn’t able to reproduce the solo when recording the tune, so he had to compose another one himself later.

Famous for his work with Deep Purple and Rainbow, Ritchie Blackmore also was an influence to Van Halen as he revealed in the conversation with Rolling Stone in 2011, saying: “Ritchie Blackmore I liked because of his vibrato bar use on ‘Deep Purple in Rock’ (1970). Also, they come out with great riffs. I mean, come on, “Smoke on the Water” is one for the history books.” In a conversation with Classic Rock magazine in 1978, Eddie pointed that Blackmore got him “hooked on the whammy bar”.

In an interview with Billboard magazine back in 2015, Eddie listed his favorite guitar riffs of all time and one of them was the one composed by Ritchie Blackmore for the classic Deep Purple song “Burn” from the album of the same name released in 1974.

The first time he met Blackmore

The first time that Eddie met Blackmore face to face wasn’t very good as keyboardist Don Airey (Deep Purple, Rainbow, Ozzy) recalled in an interview with Mulatschag TV back in 2020 (Transcribed by Rock and Roll Garage), “There was once when Gary Moore first went to L.A he befriended with Eddie because for the first time in his life he had someone that seriously frightened him. They came to a Rainbow gig at Long Beach. And they both looked so young, especially Eddie.”

Even though Blackmore criticized Eddie in an interview with Guitar World back in 1991 because of the “tapping movement” that started with Van Halen’s playing style, the musician paid tribute to Eddie Van Halen after his death in 2020, saying in an statement that he was the ultimate guitar hero: “Eddie Van Halen was a brilliant guitarist who started a technique of guitar playing which was emulated by a whole generation of guitarists”.

“He was one of the nicest musicians I ever met in the music business. Very shy and not at all conceited about his ability as a guitar player. Frank Zappa said he reinvented the guitar. I agree. He will be sadly missed. But his brilliant legacy will always be remembered. The ultimate guitar hero.”

Eddie Van Halen also pointed in an conversation with Rolling Stone in 2011 that The Who guitarist and main lyricist Pete Townshend was an influence. “Pete Townshend was an influence as a rhythm guitarist. It was just the power and intensity, and again, simplicity. You know, nothing was very complicated. Like, listen to ‘My Generation’ (Sings the main riff). Even the later stuff on Who’s Next, it’s all very power-chord based.”

After Eddie Van Halen’s death in 2020, Pete Townshend paid tribute to the guitar player when talking to Rolling Stone. He revealed that he was the one who recommended Eddie to Michael Jackson, when the American singer invited him to play in “Beat It”. “His smile was just classic. A man in his rightful place. So happy to be doing what he did. It’s completely tragic that we have lost him.”

“He was not just an innovative and stylish player with great taste. He was also a laidback virtuoso showman who just blew us all away every time. Every shredder today has lost their Master Teacher and Guide.”

Over the decades Eddie Van Halen was often called the ‘New Jimi Hendrix‘ by many famous guitar players, because of the revolution he made with his guitar playing style. He told Guitar World in 1981 that he was influenced by Hendrix in one thing: “Jimi Hendrix influenced me on how to hold the pick when I do the harmonics. I saw the Hendrix movie and discovered where the pick goes when it disappears. He holds it between the joints of his middle finger. I pick weird too. I use the thumb and the middle finger.”

Even though he pointed that Hendrix influenced him on the way he was using the guitar pick, he told Rolling Stone in 2011 that he never was really into the musician because Hendrix used equipments like Wah-Wah pedals and he couldn’t afford them when he was young: “I never really got into Hendrix. I don’t think I ever even bought a record of his. He was more abstract in his approach.”