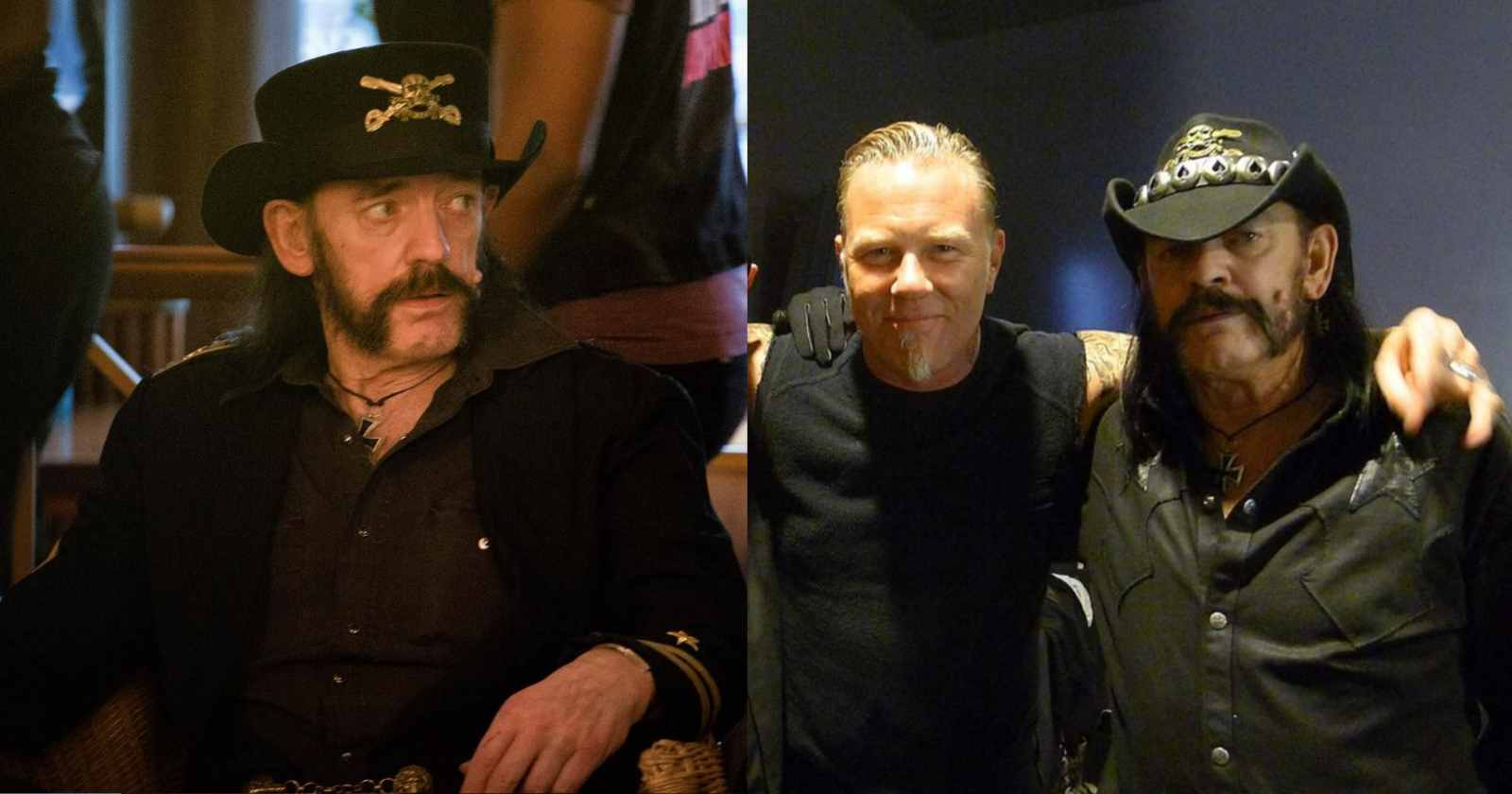 Led for 40 years by the legendary bassist and vocalist Lemmy Kilmister until his death in 2015, Motörhead became one of the most influential Hard Rock bands in history. With 23 studio albums released the band gained fans all over the world and sold estimated amount of 15 million records worldwide. Over the decades many famous musicians gave their opinion on the British group and Rock and Roll Garage selected 5 of those artists and what they said about the band.

The 5 legendary musicians who gave their opinion on Motörhead

The Danish Metallica drummer and co-founder Lars Ulrich is certainly one of the biggest fans Motörhead ever had. Back in the early 80s, before Metallica, he had the chance to hang out with Lemmy and followed Motörhead’s tour bus across the United States with a friend, seeing multiple shows of their tour.

In an interview with Dave Ling back in 2010, Lemmy  recalled how he first met Ulrich and the late Metallica bassist Cliff Burton. “There’s always been something special ever since Lars and Cliff Burton came to my hotel room before Metallica even existed. Lars introduced himself to me in his ever-modest way with the words: ‘I’m the head of your West Coast Fan Club’. We later found out there was only him and Cliff in it”.

For James Hetfield, Lemmy was a godfather for people who loved Metal

Vocalist and guitarist James Hetfield is also a big fan of Motörhead and said in an interview with Newsweek back in 2017, that Metallica would never exist without the British band.

“Lemmy in particular was an icon, sort of a godfather for people who love heavy metal. He was the captain of the ship. And we all felt he was immortal [laughs], doing the hard, hard, hard livin’ for such a long time on the road, and just really goin’ for it [laughs]. We knew it would come to an end at some point. But we really didn’t expect it. There’s certainly no Metallica without a Motörhead.”

“We would get to jam with Lemmy. He was a very friendly guy. We covered quite a few of their songs. You know, Motörhead never made it into the Rock and Roll Hall of Fame, which is a shame. But he did win a Grammy for a song called Whiplash that we had recorded on Kill ’Em All. We were trying to write a Motörhead song. He covered our song [for Motörhead’s 2006 album, Kiss of Death] that was kind inspired by him, and he wins a Grammy for it. That is very cool,” James Hetfield said.

The legendary Queen guitarist Brian May is someone people would not expect to be a Motörhead fan but he actually is and even played once with them. After Lemmy’s passing at the age of 70 back in 2015, May posted a touching tribute on his official website. He recalled the power of the music composed by the band and the incredible personality that Kilmister had.

“Words don’t come easy. Especially when you know Lemmy would have laughed at us all trying to say dignified things about him being a hero. Any time I attempted to say anything complimentary to Lemmy to his face, he would fix me with a kind of amused, contemptuous stare.”

“But a kind of hero he certainly was. Unique in just about every way imaginable. He was a living mismatch of personality types. His music was roaring, abrasive, uncompromising. His lyrics mostly deliberately gave no hint of sensitivity. Yet as a person he was a pacifist, a deep thinker. A man who cared profoundly about his friends. I was never in his closest circle of pals. But we bumped into each other often and he always managed to say something shockingly respectful to me, leaving me disarmed, because he hated being praised himself. Or so it seemed.”

“One of my dearest friends lived with Lemmy for 10 years. She always spoke of him as a tender man. Very different from his public face, which never deviated from his tough gaze on the world. Lemmy was a highly cultured and well-read man. Yet to see him glued to a fruit machine most of a night in the Rainbow Bar and Grill on Sunset Strip you would never have guessed it. In fact, that hallowed place, steeped in Rock and Roll history. Will always bear his spiritual mark.”

“We all come into this world as babies, and mould ourselves into what we want to be. Lemmy – as a product of his own will, has to be the original mould of a Hard Rock Icon which defines the term. Lemmy lived his music and his persona within his music 100 per cent to the full. Motörhead has been for most of its history a three-piece outfit. Again leaving no room for frills. And the three pieces (or sometimes four) were always frenetically at max. I remember guesting with them at the Brixton Academy. It was possibly the most ear-splitting experience of my life.”

Brian May played the classic Motörhead track “Overkill” with the band back in 2000 at their 25th anniversary concert at the Brixton Academy in London.

Lemmy was a big fan of Punk Rock music and one of his favorites bands were The Ramones. The American group also loved Motörhead, especially the late vocalist Joey Ramone who praised the British groups many times over the decades. When he was interviewed on the Christmas 1989 edition of MTV’s 120 Minutes, he revealed to Dave Kendall his favorite albums of the 1980s. One of the records he listed was Motörhead’s compilation album “No Remorse” (1984). “I love all their stuff but ‘No Remorse’ I thought it was a great collection of things. There is no band like Motörhead. They’re great, unique and exciting. Lemmy is like a total character, he is great.”

Their friendship and mutual respect was so big that Lemmy even wrote a song as a tribute to them. The track “R.A.M.O.N.E.S” was first released on the 1991 Motörhead album “1916”.
Lemmy recalled in an interview with Artisan News back in 2011 (Transcribed by Rock and Roll Garage) how Joey Ramone reacted when he first showed him the track. “I think the Ramones were excellent. The Ramones were a ray of hope when all around was dark. You know what I mean? It was like that. I f*cking love The Ramones. I always thought that we were the English Ramones, kind of. Then I wrote (the song) for them and Joey burst into tears when I played it for him the first time. (He heard on headphones) in some f*cking hotel room in New York somewhere,” Lemmy Kilmister said.

The Guns N’ Roses guitarist Slash is another big fan of Motörhead and in interview with Revolver back in 2021 (Transcribed by Rock and Roll Garage) he picked the two Motörhead songs that are some of his favorites.

“Oh f*ck there is so many Motörhead (songs). I’ll just go like ‘We Are The Road Crew’. It was one of my favorite songs for the longest time. I actually named my band Road Crew after that time at the time. ‘Killed By Death’ is probably one of my favorite Motörhead anthems. But if we sat here for a second we could go through Motörhead songs for hours,” Slash said.

A personal friend of Lemmy, the guitarist was present on his funeral back in 2016. Slash gave a speech, saying (Transcribed by Rock and Roll Garage): “Lemmy was somebody that I just feel so honored to have been friends with. I’ve met him at a time when Motörhead was one of my favorite bands. A couple of us from Guns N’ Roses in 87 were in London for the first time. (We) got invited down to the Motörhead studio to meet the band.”

“I was really f*cking intimidated. This guy who had this image of being very hardcore and we of course had this sort of hardcore image. I didn’t know exactly what to expect. I’ve walked in and was very graciously accepted by Lemmy and company. We have been friends ever since. He was just such a f*cking great example of what most of my peers all wanna be.”

“Somebody who was truly old school, had more integrity in one finger than a room fulled of rock and rollers. Straight up honest, 100% loyal. All these really fine attributes in a guy who had this sarcastic and enormous sense of humor. I just loved the guy a lot. I will miss him a lot,” Slash said.

The guitarist also said that the only thing that he was sad about getting sober was that he wouldn’t be able to drink with Lemmy anymore.