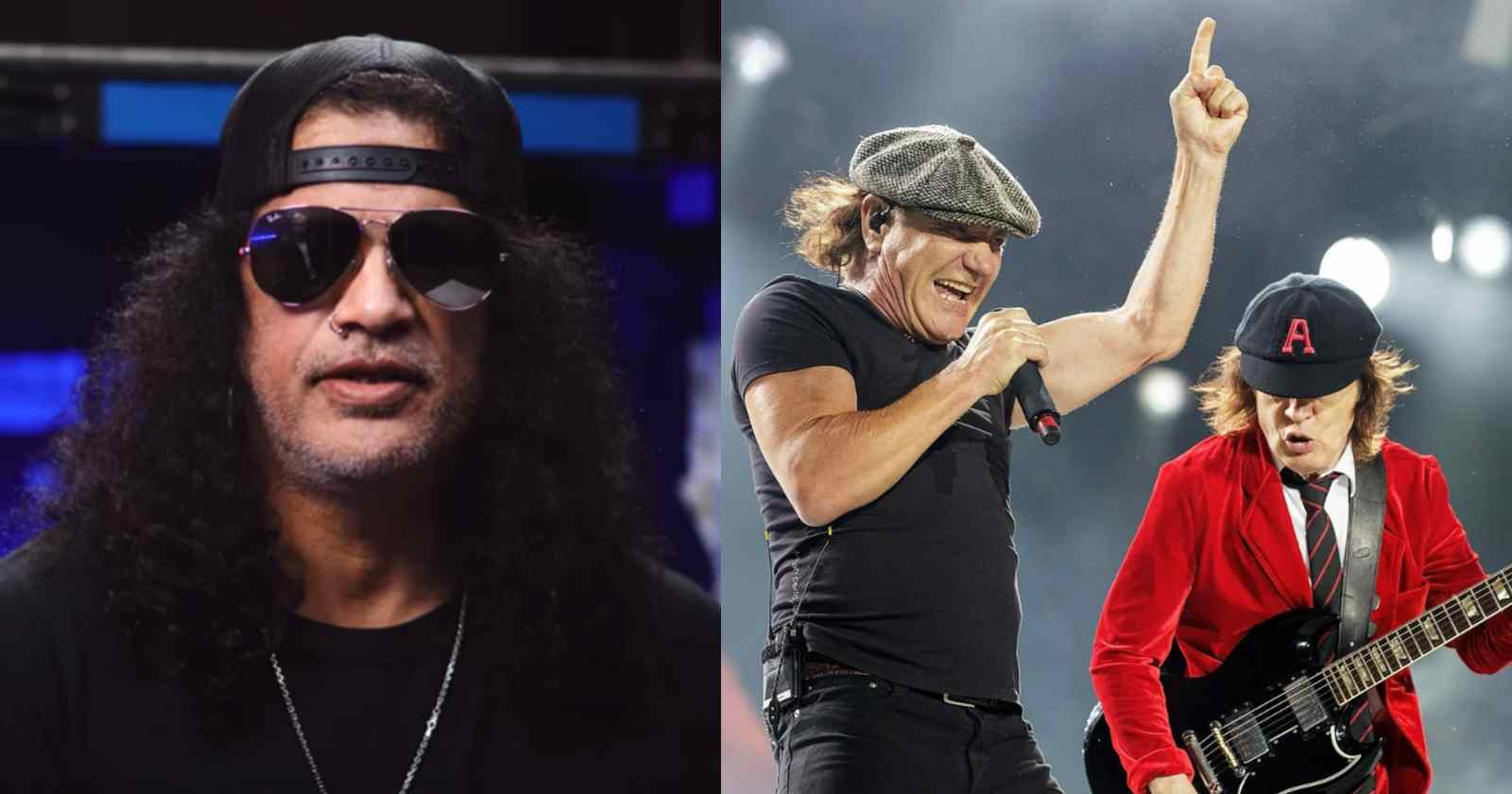 AC/DC was formed in Australia in 1973 by the Scottish-born brothers Angus and Malcolm Young, who became the guitarists of the group. They first achieved fame with Bon Scott as their vocalist in the 70s but his career was cut short in 1980 when he tragically died at the age of 33. In that same year, the group decide to continue and hired Brian Johnson that helped to continue the success with more classic albums like “Back In Black” (1980) and “Razors Edge” (1990). Over the decades many famous musicians declared their unconditional love for AC/DC. One of them is the legendary Guns N’ Roses guitarist Slash. To show more of his appreciation for them, Rock and Roll Garage selected the 4 AC/DC albums that Slash said that he likes.

The 4 AC/DC albums that Slash said he likes

As Slash revealed in an interview with Matt Pinfield (Transcribed by Ultimate Guitar) in 2022, the AC/DC album “Powerage” released in 1978 is one of his favorites from the band. The record has classic tracks like “Rock ‘n’ Roll Damnation”, “Down Payment Blues”, “Riff Raff”, “Sin City” and “Kicked in the Teeth”.

“There’s two of my favorite records. One’s Bon Scott. That’s ‘Down Payment Blues’… ‘Powerage.’ But, I mean, ‘Back in Black’ was a big deal at the time, because when it came out they were talking about that period when, in the ’80s when ‘Back in Black’ had come out. It was such a massive record and the songs were so great. And it was a great record from start to finish.”

“So that that Brian Johnson delivery on that record. Some of those songs are just undisputedly some of the best rock and roll that was ever created. But the ‘Powerage’ record is probably, hands down, my favorite musical AC/DC record. I think just the rawness of the record and the songs themselves… It’s a seminal AC/DC record,” Slash said.

“Highway To Hell” was released in 1979 and was the last album to featured singer Bon Scott, who tragically died in 1980 at the age of 33. The record had classic songs like the title-track, “Girls Got Rhythm”, “Walk All Over You”, “Touch Too Much”, “Shot Down in Flames” and “If You Want Blood (You’ve Got It)”.

Talking with BBC Radio in 2021 revealed that “Highway To Hell” was the first AC/DC album he ever heard and had a big impact on him. The musician also chose the guitarist Angus Young as his “Rock God” and recalled when he had the chance to be the band’s opening act back in 2001.

“There’s a handful of people that were a big influence on me coming up. I don’t know if there was just a single one. When I was a kid living in England, it was Pete Townshend. Then it was Keith Richards, and then, later on, it was Jimmy Page and Joe Perry.

“It was right around the time I started playing guitar. So I’d say those four guys and Jimi Hendrix. So those are five serious rock icons that had a massive impact on me. But you know what? I’ll go with Angus Young at this point because he’s somebody I’ve known for a really long time. The first record I really heard from AC/DC was [1979’s] ‘Highway to Hell.’

“I didn’t hear any of the stuff prior to that. But that had a big enough of an impact, and then after that, ‘Back in Black.’ And then I got to meet Angus and Brian [Johnson, vocals] and the rest of the guys when I was opening for AC/DC with Snakepit in 2001.

“And they were just really great. They took me out on the road, took me under their wing. I just always loved their work ethic, always loved Angus’ guitar style. (So) I mean, all things considered, the first time I saw AC/DC – I think it was on TV. I was just like, ‘Wow! Check this out!’, you know?” Slash said.

Since Slash and bassist Duff McKagan reunited with Axl Rose again and are touring as Guns N’ Roses again they have played many covers during their live concerts. Many of them are from AC/DC, especially after Axl replaced Brian Johnson in the band  temporarily in 2016.

Many of the AC/DC tracks that Guns N’ Roses performed live from the Brian Johnson era are from the classic album “Back In Black”, that was the first one to feature the musician. Slash already shared his love for that album many times over the years. In an interview with Music Radar in 2014, the guitarist chose the 10 records that changed his life and one of them was “Back In Black”.

“Sometimes it’s all about the right record at the right time. I was an AC/DC fan, and ‘Powerage’ and ‘Highway To Hell’ were big records for me. But the one that had the most impact on me, because of the sheer timing of it, was ‘Back In Black’.

“It came out during that really crucial time in my life when I was maybe 15 years old. At that age, when something hits you, the feeling is magnified and intensified. At that point, I was going to concerts on a regular basis. I was just so into music, and then along came ‘Back In Black’, which just blew me away. A great, great album,” Slash said.

Talking with Consequence Of Sound in 2020, Slash recalled that he had no ideia that Bon Scott had died and AC/DC had replaced him until “Back In Black” came out and he heard the band with another singer.

During the same conversation he said that the track “Roll Ain’t Noise Pollution” is probably his favorite from that record. He also said that “Hells Bells” guitar solo is one of his favorites from all time.

After four years that Brian Johnson had to leave the band due to hearing issues, AC/DC secretly recorded “Power Up”, a new album with Johnson that was released in 2020. Slash gave his opinion on that album in an interview with Consequence Of Sound in the same year of the release. The musician lamented the death of the guitarist Malcolm Young, said that he was really excited to see the band returning and that the new album was great.

“The tragedy of losing Malcolm… the fact that Angus and company would survive that and keep it going, in the spirit of probably what Malcolm would have done, was great. I just love those guys because as far as rock ‘n’ roll is concerned, they just are driven.”

“Then, on top of it, they make such a great fucking record at this point in the game. It’s a really inspired album. I’ve had it in the car for the last couple of days. It’s probably gonna sit there for a while. It’s exciting for me. I’m happy for them. I can’t wait for this virus situation to end so we can go check them out on tour somewhere,” Slsah said.