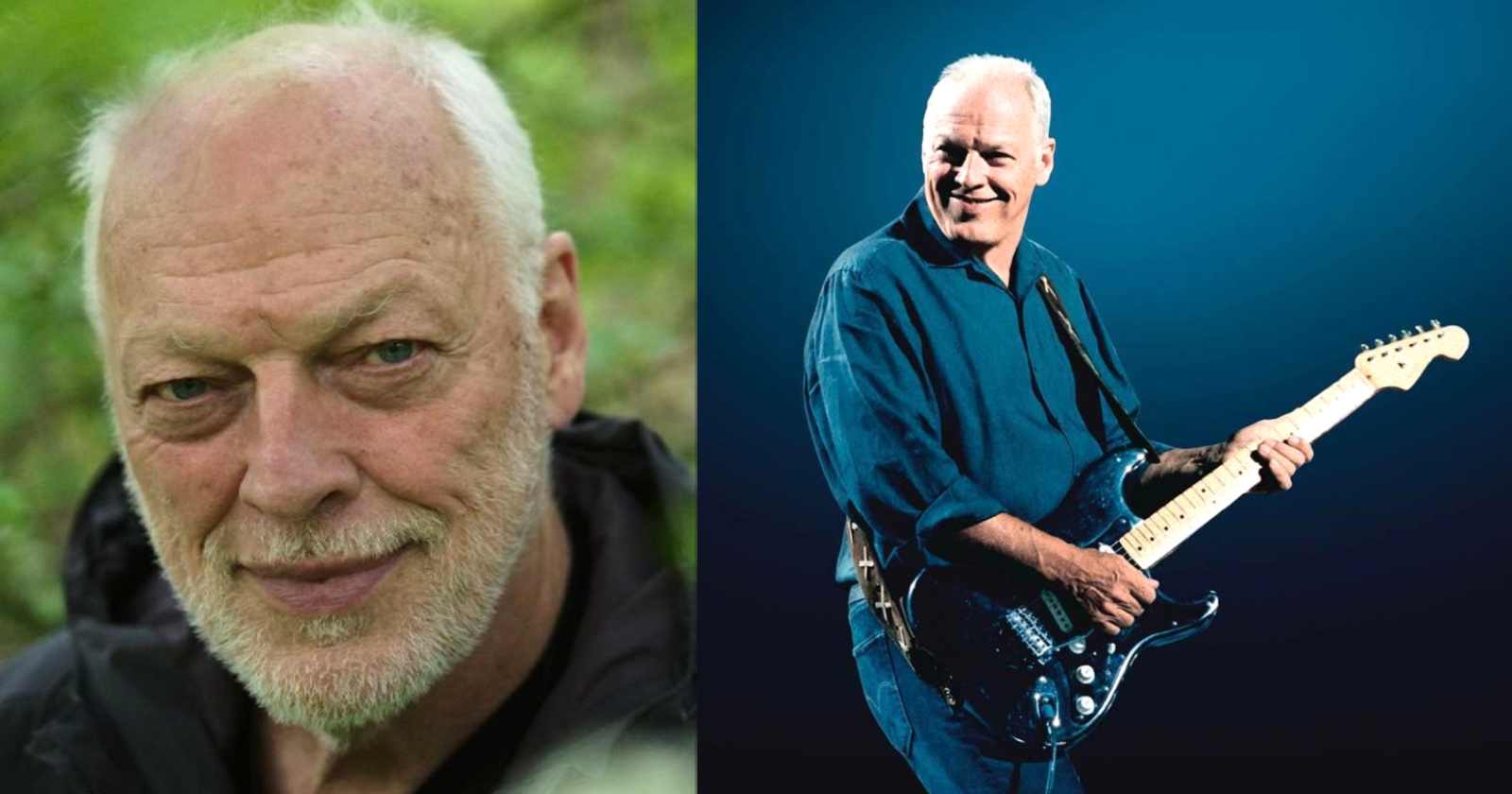 Pink Floyd guitarist and singer David Gilmour was part of some of the best-selling albums of all time with the British Progressive Rock group and still is a huge influence to millions of musicians around the world. In the frequently asked questions section of his official website, the musician listed 8 bands and musicians that influenced his style and that are also some of the ones he likes te most. Rock and Roll Garage gathered for the list what the musician said in interviews over the decades about those artists.

David Gilmour was inducted into the Rock and Roll Hall Of Fame as a member of Pink Floyd in 1996 by The Smashing Pumpkins singer and guitarist Billy Corgan.

Just like almost every Rock and Roll musician, David Gilmour also was inspired by The Beatles. The guitarist and singer shared his love for the Liverpool group over the decades and he even had the chance to play live in concert with Paul McCartney on several occasions. He also composed the guitar solo for McCartney’s 1984 hit “No More Lonely Nights”, played on “Flowers In The Dirt” (1989) and “Run Devil Run” (1999).

In an interview with BBC Radio 2 show “Tracks Of My Years” back in 2006 (Transcribed by Rock and Roll Garage), Gilmour listed some of his favorites songs of all time and one of them was from The Beatles: “I was an absolute mad Beatles fan. ‘You’ve Got To Hide Your Love Away’ is I think, John Lennon‘s first moment of being influenced by Bob Dylan. It’s very much on the Bob Dylan vein. So it’s just one example of hundreds of things I could choose. Anything by The Beatles, really. Fantastic song,” David Gilmour said.

In a conversation with Mojo Magazine in 2015, the musician once again praised the band saying that he would like to have been a member of the Beatles: “I really wish I had been in the Beatles; (They) taught me how to play guitar; I learnt everything. The bass parts, the lead, the rhythm, everything. They were fantastic.”

Known for the feeling that he puts in every note he plays in the guitar, David Gilmour got that from the Blues players, including Eric Clapton as he revealed during his career.

The John Mayall & The Bluesbreakers albums with Eric Clapton and Peter Green are the ones that inspired Gilmour the most as he revealed in an interview with Relix magazine in 2015: ““All of those guys were incredible and I spent time trying to learn how to play their licks perfectly.”

“I would suggest any young player should try to sit down and do that. You will wind up knowing how to play their stuff quite well but eventually you will find your own style form that. It forces its way out of the copying,” David Gilmour said.

Like almost every Rock and Roll guitarist, Jimi Hendrix also was an influence to Gilmour and he even was a fan of the late musician before he became “The Jimi Hendrix”. In an conversation with BBC Radio 2 show “Tracks Of My Years” in 2006 (Transcribed by Rock and Roll Garage), he listed Jimi Hendrix’s “The Wind Cries Mary” as one of his favorite songs of all time and recalled when he first heard Hendrix: “Jimi Hendrix, fantastic. I went to a club in south Kensington in 1966 and this kid got on stage with Brian Auger and the Trinity and (started to play) the guitar with the other way around (upside down) and started playing. Myself and the whole place was with their jaws hanging open.”

“I went to the next day to record shops and I said ‘You’ve got anything by this guy Jimi Hendrix?’ and they said ‘Well, we’ve got a James Hendrix’. He hadn’t yet done anything. So I became rather an avid fan waiting for his first release. Also this is one of his beautiful ballads that I really love,” David Gilmour said.

“I went down to go to it and I was camping in a tent, just being a punter. I went backstage where our main roadie guy, Peter Watts, was trying to deal with all the mayhem, with Charlie Watkins of WEM. They were very nervous, they were going to have to mix Hendrix’s sound. I did some mixing stuff in those days and they said ‘Help! Help!’ so I did,” David Gilmour said.

The guitarist of the instrumental British band The Shadows, Hank Marvin was a big inspiration for many guitarists that grew up in the 60s. The way that Gilmour plays melodies is connected to Marvin’s playing in The Shadows as he stated in an interview with Music Radar in 2006: “The way I play melodies is connected to things like Hank Marvin and The Shadows. That style of guitar playing where people can recognise a melody with some beef to it.”

In an 1981 video interview, Gilmour listed Marvin as one of his early influences saying:”He was the first major electric sort of guitar hero for us Brits”. In the same conversation he revealed that he had the chance to got see him play live several times and said he was brilliant.

Another Blues guitarist that influenced David Gilmour was the legendary B.B King and they had the chance to play live together back in 1998 at the Jools Holland show on BBC Two, performing the song “Eyesight To The Blind”.

The Pink Floyd musician praised King in a conversation with The Guardian back in 2006, saying: “He’s a lovely chap. His early stuff was stupendous, and he’s just kept going. I first met him in New York. He came up to me and said, ‘Hey, boy, are you sure you weren’t born in Mississippi?’ I’ve played with him a couple of times since, on a Later With Jools Holland session and on one of his albums. When he’s in the dressing room, he spends all his time writing lyrics. There are some guitar players who are instantly recognisable, and then there are all the rest,” David Gilmour said.

In an interview with Guitar Classics in 1985 he listed King as one of the Blues guitarists that inspired him the most: “I was a blues fan but I was an all-around music fan. For me it was Leadbelly through B.B. King and later Eric Clapton, Roy Buchanan, Jeff Beck, Eddie Van Halen and anyone you care to mention.”

Bob Dylan is one of the most influential musicians in history and also was an inspiration to David Gilmour as he revealed in an interview with newspaper The Guardian back in 2006 that he loved the American musician even when he changed to electric guitar: “To me, I was never one of the people who thought Dylan was a monster for going electric. I liked the change. But I must say the power of the young Dylan as the acoustic-playing protest singer- which he’s always denied.”

“But sorry Bob, you were a protest singer. Just to get his guitar and play to a crowd of people and it’s like an arrow. His words come out and the music. But people underestimate his actual musical abilities. The melodies and the words just shoot out like an arrow. I think he was unbelievable. And is”.

In an conversation with BBC Two back in 2015 (Transcribed by Rock and Roll Garage), Gilmour recalled that his parents gave him the first Bob Dylan record on his 16 birthday: “I got Bob Dylan’s first record for my 16th birthday, which they send me from Greenwich Village (New York). Before that they send me the Peter Seeger’s guitar tutor record, which is my only actual instruction (To play guitar) was with Peter Seeger’s guitar tutor record,” David Gilmour said.

One of the most famous American bands in history, The Beach Boys was also an influence to Gilmour, especially when he heard their classic album “Pet Sounds”. In an interview with BBC Radio 2 in 2006  (Transcribed by Rock and Roll Garage), the guitarist said that he used to play songs of the Beach Boys with one of his early bands: “I love the Beach Boys. My early band in Cambridge when I was a teenager, we did a lot of Beach Boys songs.”

“But I didn’t wanna play one of the the too surfy ones. I just love the place that Brian Wilson got to, (when he came out) of all that Surf Music. Some of these moments are just sublime. ‘God Only Knows’ is one of the best things. It’s so beautifully constructed. So meaningful as well,” David Gilmour said.

David Gilmour was the one responsible to induct Brian Wilson into the UK Music Hall of Fame in 2006 and he said in his speech (Transcribed by Rock and Roll Garage): “The first band I actually formed when I was a young lad was with some like-minded souls from my hometown. We wanted to sing harmony. So the harmony we wanted to sing was The Beach Boys harmony. Also that love of singing harmony remains with me today. The man who is the main inspiration for that love is the man we are honoring here tonight is Brian Wilson.”

“Even in those very early days of The Beach Boys, songs like ‘In My Room’ and ‘Don’t Worry Baby’ were giving indications that Brian Wilson painted with a much more colorful palette than was offered by the Surf Music that he was so adept at,” the Pink Floyd musician said.

Born in Mooringsport, Louisiana, United States back in 1888, Leadbelly and is remembered for his strong vocals, talent on the 12-string guitar and for the folk standards he recorded. Gilmour often says that the American Folk musician was a big influence and even said to BBC Radio 2 in 2006  (Transcribed by Rock and Roll Garage) that the song “The Rock Island Line” was one of his absolute favorites. “Leadbelly, I loved him when I was very young, loved his 12-string guitar playing. I always enjoyed the 12-string. His story, he was in prison, he got released from prison on a murder charge because he was such a great singer.”

“But for me, ‘Rock Island Line’ was one of the first things I’ve learned. Also is one of the things that you can you can actually learn one chord, get your fingers on that guitar in one position and not move from there, you can do the whole song and sing this old song to yourself. So it’s a great thing, part of my childhood,” David Gilmour said.