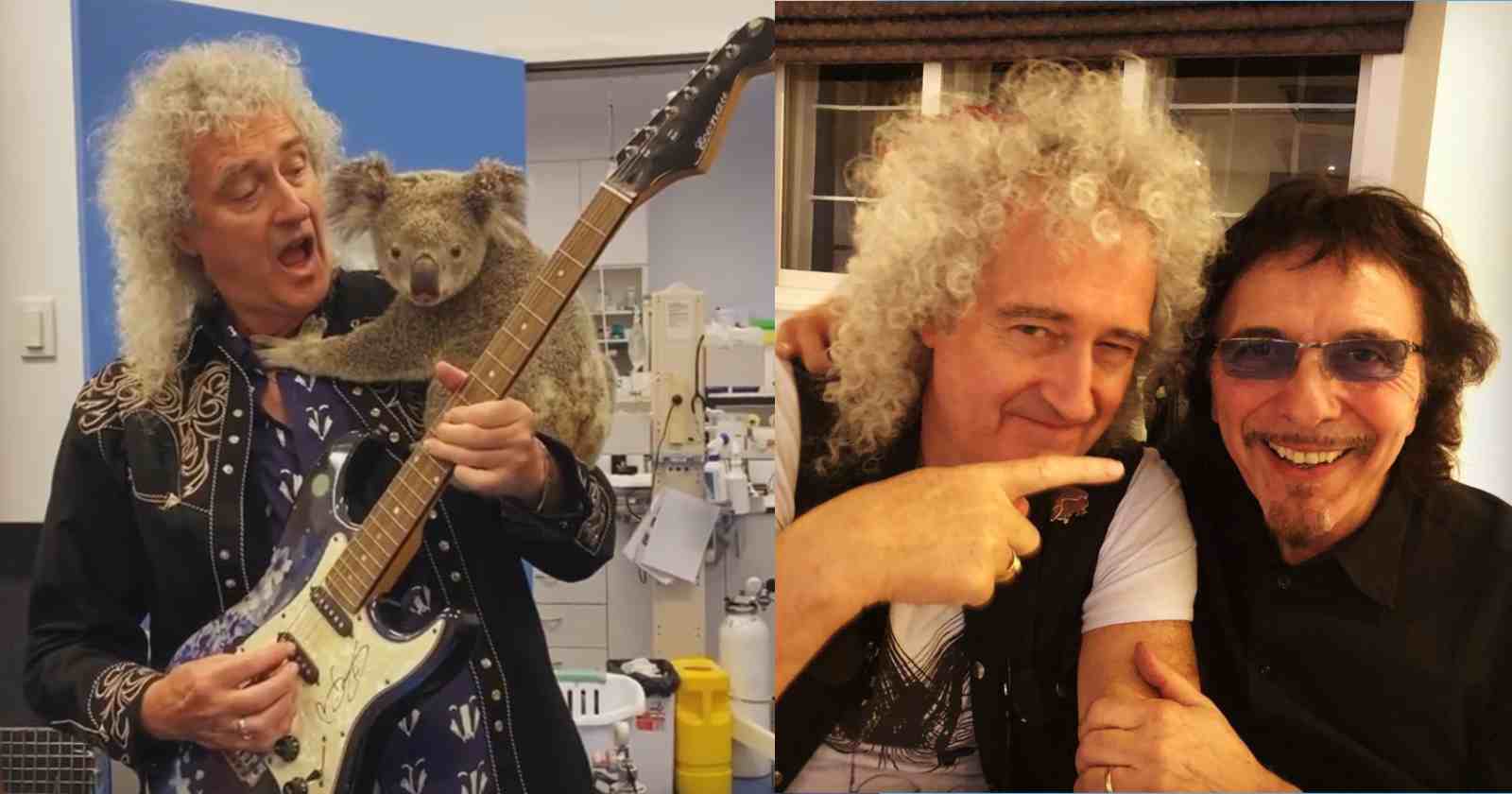 Queen became one of the most important Rock and Roll bands of all time and an essential element of the group was the guitar sound, riffs and melodies created by guitarist Brian May. Without the unique May technique, Roger Taylor‘s drumming, John Deacon‘s bass playing and Freddie Mercury’s amazing singing wouldn’t be the same.

Over the decades Brian May talked in many interviews about music and influences and in a conversation with My Planet Rock‘s Liz Barnes back in 2013 (Transcribed by Rock and Roll Garage), the British guitarist chose some of his favorite songs according to subjects like favorite guitar track, Queen’s songs, musicians he worked with and his friend Tony Iommi (Black Sabbath) to be played on the show.

When asked to pick a really good guitar track, Brian May said: “Okay, what has opped into my head is ‘Since You’ve Been Gone’, because I think is a quintessential. I suppose you call it Pop Rock in a sense, you know. But it’s uncompromising, it’s a great song and it’s brilliantly played. I mean, the drums, my dear friend Cozy Powell of course, long gone and I worked wit him and it was a wonderful experience working with that guy.”

Blackmore’s opinion on Brian May and Queen

Ritchie Blackmore is know for always being sincere and in an interview posted by the Deep Purple’s official Youtube channel back in 2018 (Transcribed by Rock and Roll Garage) he praised Brian May, saying: “Queen, I first heard them doing a song about a train, this is about 1974 or 1975. I can’t remember the title but I was very impressed with the guitar playing and of course the singing. I’ve noticed that Freddie Mercury has a cross between Ronnie (James) Dio and almost like an opera operatic type of voice. To me he was a true star, he knew exactly how to milk an audience, what a musician.”

“Some of the stuff they put down all those four part harmonies… very, very clever stuff. Of course there’s Brian, who is probably one of the nicest guys in the business. A brilliant guitar player to boot. I’ve worked with Brian on other stuff and he is such a nice man. He is a bit too tall but he can’t help that. Wonderful band, excellent band and I was very surprised that they did so well in America.”

Queen “Made In Heaven”

“It’s a quintessential Queen tack. It’s one of the biggest we ever did. It was never a single, strange enough. It’s one of my favorite tracks. ‘Made In Heaven’ is so enormous,” Brian May said. The song “Made In Heaven” was released on the fifteenth and final studio album by Queen of the same name in 1995, four years after Freddie Mercury’s death.

John, Roger and Brian spent the next four years after Freddie’s death working sporadically on a new project with the vocal recordings left behind by Freddie. The album debuted at number 1 in the UK, where it went quadruple platinum selling 1.2 million copies. 500,000 copies were shipped in the United States.

Brian May chosed Black Sabbath’s “Paranoid” after talking about his great friendship with guitarist Tony Iommi: “Tony is great, he is one of my very few real friends in the business, you know. He is a great, great, great friend. He is obviously kind of the father of Heavy Metal, really. This man came up with a million riffs which are the cornerstone of Heavy Metal music. But he is totatlly modest, you know. He does laugh when I say that,” Brian May said.

In an interview with BBC Radio (Transcribed by Blabbermouth) in 2021, Tony Iommi recalled that the first time he heard Queen, the first thing he noticed was Brian May’s guitar sound and style and when he heard the band’s debut album he thought: ‘This is a really good band.’ And a guitar player is always into other guitar players, and he had a sort of unique sound and the way that he played, I just liked it. It was appealing. He’s just got a certain character that you didn’t really hear from anybody else – he’s got something very ‘him.’”

When talking about what made him want to play the guitar in the first place, Brian May shared his love for Buddy Holly, saying: “That was the moment I though ‘Wow, that’s what I wanna do”. When I heard that incredible janling noise. Buddy Holly & The Crickets, I used to listen to all in my little crystal set under the covers when I was pretending to be asleep, you know.”

“It was magic to me. Because in the world that I grew up in it was the world of soft classical music and the big-band era, Johnny Ray, Bing Crosby. And this guy coming along with this jangling sound and this amazingly kind of spooky sound of the backing harmonies as well. I was just blown away and I still am every time I hear it,” Brian May said.

Buddy Holly not only influenced Brian May but other important musicians like Ronnie (James) Dio. The American musician born in Lubbock, Texas in 1936 died too soon at the age of 22 in 1959, in a plane crash with two other famous musicians: Richie Valens and The Big Bopper. February 3, the day of their death is still known as “the day that the music died”.

“This is something which I grab hold of because I thought this is really a Rock track. This is what I shall make it with Kerry and she’s got this enormous voice.”

“So we did our own adaptation, I’m very proud of this as an arrangement. It’s very Rock, it’s got laods of cloud guitar on it, which is kind of what I do, I suppose. Also got a nice very big orchestral arrangement, which I did with Steve Sidwell, which I’m also very proud of,” Brian May said.

Kerry Ellis is an English actress and singer who is best known for her work in musical theatre and subsequent crossover into music. In 2002, she was casted in the role of Meat in the original London cast of Queen’s musical “We Will Rock You”.

Queen “I Want It All”

“‘The song was about reaching out and grasping what you want in life. (…) A lot of Queen’s music was about normal people, with normal dreams and normal frustrations trying to grab the kernel of life. So ‘I Want It All’ sums that up quite well,” Brian May said.

One of Queen’s most famous songs, “I Want It All” was released in the album “The Miracle” (1989) and it reached number three on the singles charts of the United Kingdom, Finland, Ireland and New Zealand, as well as on the US Billboard Album Rock Tracks chart.

With its message about fighting for one’s own goals it became an anti-apartheid protest song in South Africa.

Budgie singer and bassist Burke Shelley dies at the age of 71
What is Steve Howe’s opinion on Genesis, ELP and King Crimson
To Top