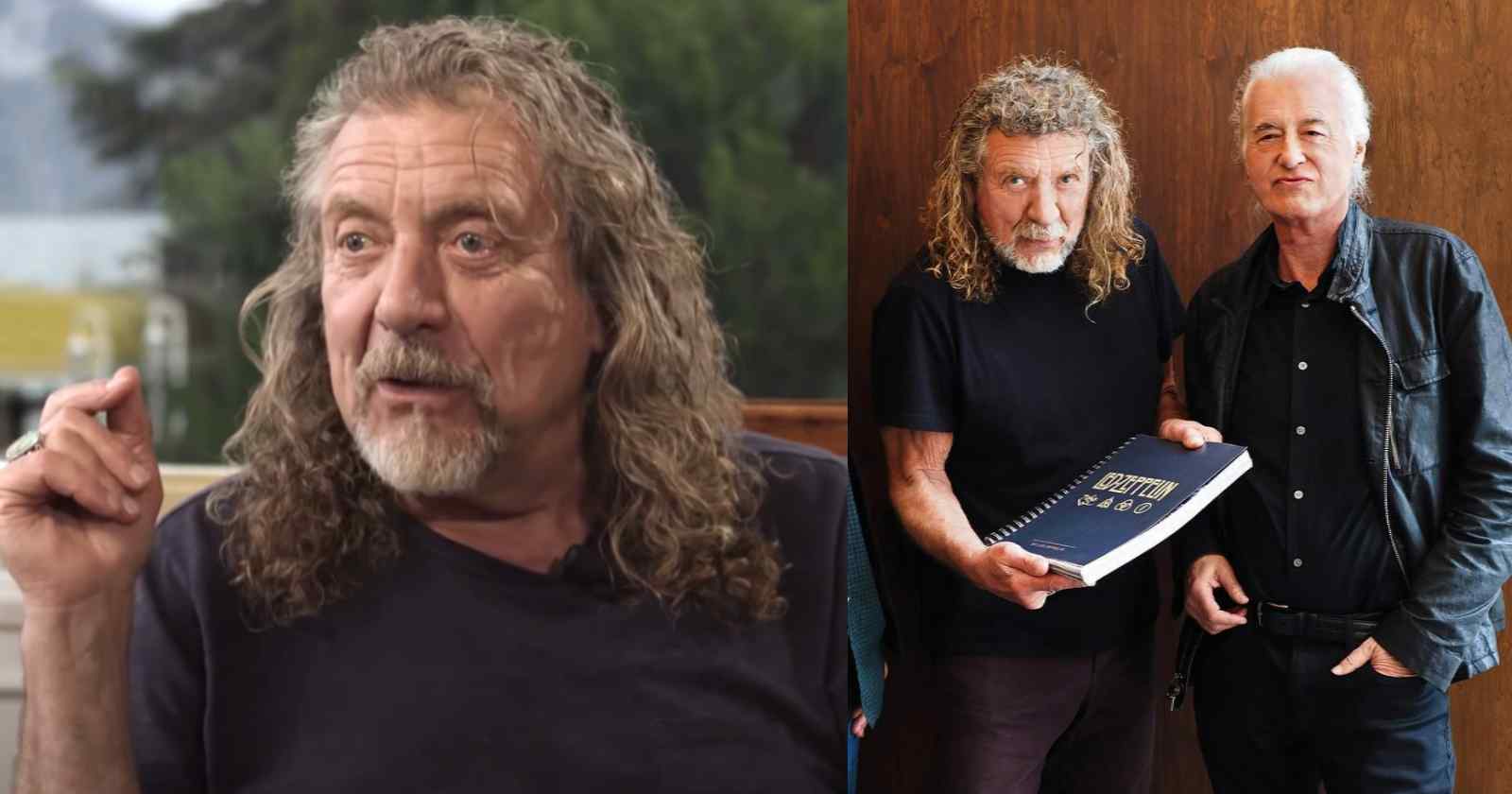 Led Zeppelin vocalist Robert Plant is one of the most influential Rock and Roll singers in history and inspired generations of musicians over the decades. He listed in an interview with BBC Radio show Tracks Of My Years in 2021 (Transcribed by Rock and Roll Garage) 10 songs that are some of his favorites of all time and explained the reason why they are so important to him.

The Rolling Stones “Come On”

“You probably may have realized it in my early history as a singer and recording artist, the adventures that I’ve had in the music game I was really drawn and obsessed by the music of Chicago, Mississippi and the Delta Blues. I think on the English music scene, one of the main forerunners and purveyors for bringing this music to us as early teenage kids were the Rolling Stones. I do believe this was their first single, if I remember right, I bought it on the blue Decca label. It’s a cover of Chuck Berry‘s ‘Come On’. It was the beginning of their great career, promoting or perhaps giving us inspiration for Country Blues and City Blues of North American.”

“I was obviously, always on the Black Countryside. So I didn’t really know about the London scene too much and I did actually see the Stones on a tour were the Everly Brothers had the record a ‘Walk Right Back’. They did a theatre tour with Bo Diddley and Little Richard It was the Rolling Stones first ever package tour, if you like. So it was really an eye-opener. We were all leaning towards that music. But nobody really had it down. I think in those days, The Stones were bringing the stone down the mountain. So that was really special,” Robert Plant said.

Cilla Black “It’s For You”

“All that time, through the Stones and The Beatles, covering great Motown things “Please Mr. Postman” and “Some Other Guy”, all these sort of translations into the British pop scene were everywhere to be found and in the middle of it all, another liverpudlian (Person born in Liverpool) who had, what I think, a magnificient voice. Cilla Black, had this song written to her by Lennon and McCartney. It was dramatic and beautiful. Also it was a sort of divertion from all the stuff that I was listening to. It was almost like a Bacharach and David type of presentation and well, her voice and her gift as a singer stayed with me forever.”

“So it was a particularly beautiful piece of music and it was a division between the kind of old late 50s, sort of middle of the road cabaresque type of singing and then suddenly she comes around the corner as Dusty Springfield and Lulu, three great British singers, who were changing the picture of the whole force of nature for women,” Robert Plant said.

Etta James “I Just Want To Make Love To You”

“We’re still really in Chicago, there in Chess Records, which of course where the Stones went to make records. So around the corner came this wild beautiful singer Etta James. This is just one of her great moments and the great thing is, you know, it’s a Muddy Waters song.”

“So she actually brings the kind of beautiful rough Delta Blues back into focus. Ironically it would have been the song that back in the day would have held no interest for the radio here. But now I think it has been popularized one way or another through commercial TV and stuff. But her singing and the song itself is wicked.”

“Imagine being in a club somewhere and this woman gets on stage and lets it go. It’s the reason that I do what I do, to see people like that. Having seeing her and Tina Turner in their early days, it’s just wild to hear one human get up there and just let it go like that. It’s beautiful,” Robert Plant said.

In addition, she won 3 Grammy Awards for “Best Traditional Blues Album” in 2004, “Lifetime Achievement Award” in 2003 and “Best Jazz Vocal Performance” back in 1994.

Mary Wells “You Beat Me To The Punch”

“As the kind of music became, if you like, more refined and we go from Chicago to Detroit and the Motor City, Hitsville USA and the beginnings of Motown with Berry Gordy. It is just a fun and beautiful music.”

“Through it all you had inumeral great lady singers, we know now about Diana Ross, Martha Reeves and Vandellas. But to me it was this really great restrained vocal. It was somebody who was actually living the song. I thought it was really special, because it was restrained,” Robert Plant said.

“Many of us were on a kind of mod-circuit, which we would be traveling around and playing this various clubs in Watford, Brighton, all over the country. It was what you loosely call sub-pop. Rod (Stewart) had been in a band called Steampacket with Julie Driscoll, Brian Auger and Long John Baldry.”

“At this stage, Jeff Beck, who was along with Jimmy Page and Jeff Beck part of those three guys that shaped the guitar from the mid to late 60s, for a long time Rod Stewart fronted this little celebration and yet again it’s another song that came out from Chicago. It’s a Howlin’ Wolf song called ‘I Ain’t Superstitious’. But between Rod and Jeff, they really killed it. When Led Zeppelin first went to America they were playing and they were just out of this world. They were really, really amazing.”

“Rod and I, at that time, we had a lot in common. We were at the front of groups with these excellent musicians behind us. I guess we were living the life. I remember John Bonham and I went to the management office when we first joined the Yardbirds which became the Led Zeppelin.”

“We saw Rod Stewart in the reception, and he was like a tanned Adonis with his see-through shirt and hairs sticking up about maybe 18 inches off the top of his head. It was remarkable. And Bonham said to me ‘Do you think we’ll ever be like that?’ I’m still waiting for that day,” Robert Plant said.

Jeff Beck was inducted into the Rock and Roll Hall of Fame back in 2009 by Jimmy Page, his friend and ex-bandmate in The Yarbirds, who said at the ceremony “He’d just keep getting better and better, and he leave us – mere mortals”. In addition, Beck was nominated 16 times for the Grammy Awards and won on 8 ocassions.

“Beautiful. In my early days and right up to today, obviously I was really in this kind of Blues boom music, that we were living in this country, sub-pop that we traveled through, pre-Zeppelin and during Led Zeppelin. The music of the west coast of America had a huge ressonance for me.”

“It was talking about all the sort of the social unrest, problems in Vietnam, the fact that youth culture wanted a world to speak for itself. So I think that along with The Byrds and Buffallo Springfield, Jefferson Airplane, I think that Arthur Lee’s band Love and this particular ‘Forever Changes’ album, is voted like one of the top 5 albums of all time in the psychedelic world.”

“This opening track on the album it was written by Bryan McLean, his partner, and still sends a shiver for me. It’s such a beautiful piece of music and spectacularly produced,” Robert Plant said.

Love was one of the first racially diverse American rock bands and their sound was characterized as garage rock, folk rock, and psychedelic. Also being linked with blues, jazz, flamenco, and orchestral pop music.

“The Byrds were spectacular with David Crosby, Roger McGuinn. They gone through this sorts of translation and the re-reading of quite few (Bob) Dylan songs like ‘Mr. Tambourine Man’ and so on. So this song ‘Chestnut Mare’, just epitomizes to me the kind of way the American were sending out messages at that time.”

“Beautiful musical messages in a culture that we could only vaguely relate to. There were not many chestnut mare’s running around in the Black Country,” Robert Plant said.

“Well, what a song. Joni Mitchell, if you like, the queen of all that beautiful music that was written around that time for the late 60s on through. Her catalogue it’s incredible and her concerts were really beautiful, incredibly moving. The whole Laureal Canyon music scene up there in Sunset Boulevard was something really special.”

“She re-recorded a bunch of songs a few years ago and the album was called ‘Travelogue’. This song ‘Amelia’, to me it’s the sound of a mature woman who visits her songs and gives them more brevity and perhaps even more beauty. I can relate to that, because I am a mature singer myself and I’m looking for ways to express that suit my time,” Robert Plant said.

Born in Fort Macleod, Alberta in Canada,  Joni Mitchell is one of the most famous songwriters of all time. Her work often talks about social and philosophical subjects with the sound influenced by Jazz, Pop music, Rock and Folk.

Some of her most famous songs are “Big Yellow Taxi”, “A Case of You”, “California”, “Both Sides Now” and “River”. Mitchell also won 9 Grammy Awards, the first one in 1969 for “Best Folk Performance”.

Alison Krauss “Down To The River To Pray”

“It wouldn’t be right if I didn’t think how magnificent Alison Krauss. She is a really good strong friend of mine, we are in the middle of our second release, it has only taken 15 years but two albums out. But we are always on the run. She is just a superb singer and is too, digging deep into the beauty of old songs. So she takes a song and she turns it around upon itself.”

“Her performance on ‘Down To The Muntain” is just incredible. Also again, produced by T Bone Burnett who has been working with us on our ‘Raise The Roof’ album. It’s just a superlative performance by this incredible woman,” Robert Plant said.

“Well, Nathaniel is one of the really big strong new names in America. Also he is a real great Blue-Eyed Soul singer and his new record, it’s just a killer. So he is a Soulfull guy, he is one these guys that will just carry the torch. Beautiful songwriting, beautiful singing, great delivery and he is a magnificent guy to go with it.”