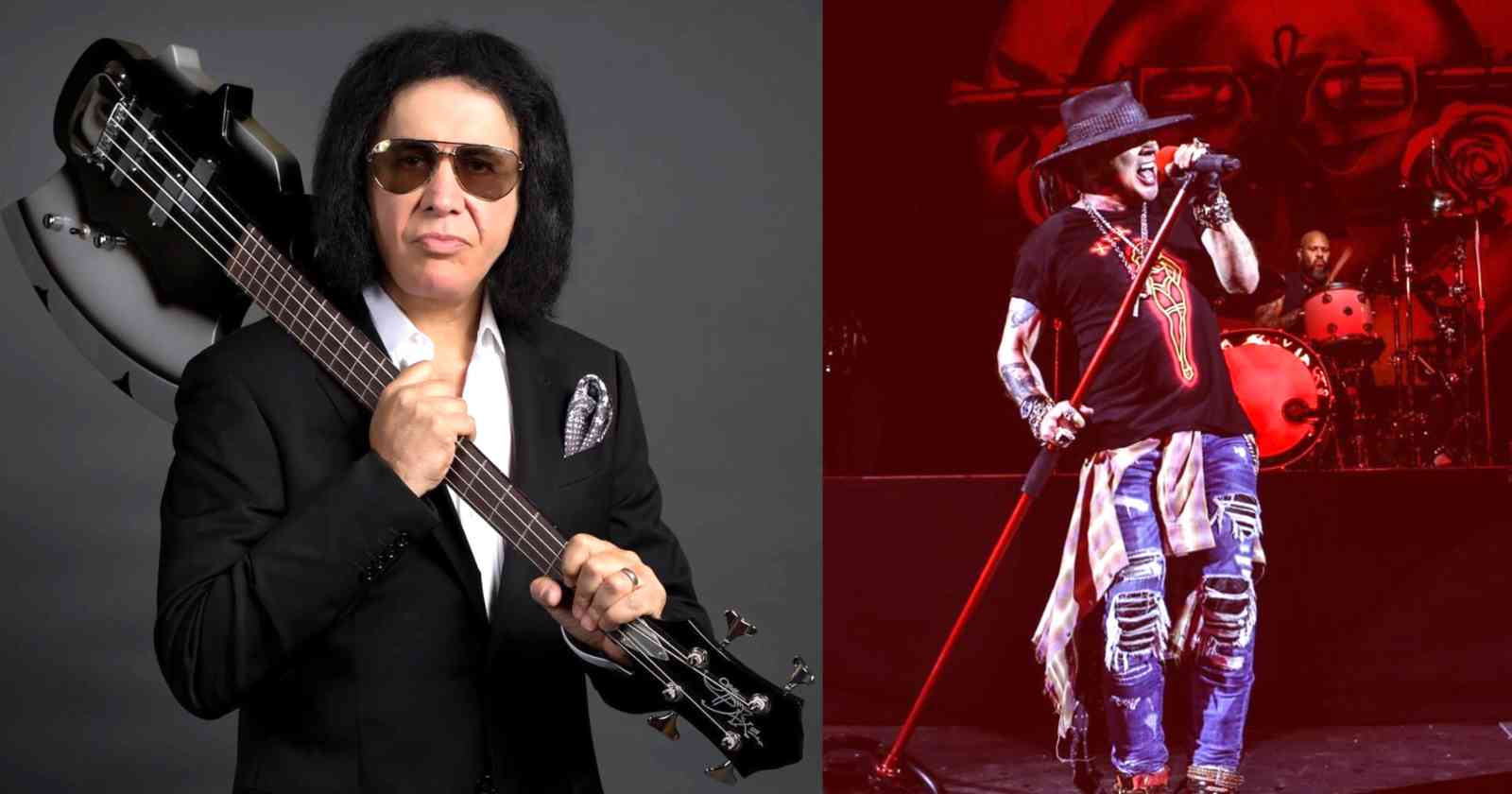 One of the greatest bands to appear in the late 80s, Guns N’ Roses made Rock and Roll fans that were a little tired of Hair Metal happier for their pure Hard Rock sound. Over the years many famous musicians talked about the Los Angeles group and gave their opinion on their music. One of them is Kiss vocalist and bassist Gene Simmons talked talked about Axl Rose, Slash, Duff McKagan and more in some interviews.

What is Gene Simmons’ opinion on Guns N’ Roses

When asked by The Quietus back in 2015 to choose his 10 favorite albums of all time, one of Gene Simmons choices was Guns N’ Roses debut “Appetite For Destruction” (1987) and explained that the record had the honesty Rock and Roll music didn’t had at the time and said that 80s was a terrible time, because guitars didn’t sound like guitars and the drum machines were all over the place.

“The songs were undeniable! ‘Welcome To The Jungle’ is an undeniable song in the same way that ‘Satisfaction’ has that great riff with the lyrics on top of it. Great lyrics, great imagery. As soon as you heard that high-pitched voice that harkened back to a Robert Plant-ish approach to singing, which hadn’t been heard in quite a while. Well, it still works today.”

“That’s got to be coming up to 30 years old, but you put that on today if it was a brand new band, I would say, ‘Who’s that?’ That intro is almost symphonic, and it just defined the band. You hear that song, and then the rest of the album follows through. ‘Welcome To The Jungle’ is head, hands and feet above the other material. Bands have a few songs that just stand up, you know? You think Thin Lizzy, you think ‘The Boys Are Back In Town’. And You think the Stones, you think ‘Satisfaction’.”

“You think Led Zeppelin, you think ‘Stairway To Heaven’. There are just certain songs that, either because of the melody or lyric or the sound of the song, intrinsically say, ‘This is what that is’. The only band who doesn’t have that thing, just because they have so many god damn good songs, is The Beatles,” Gene Simmons said.

Although he likes Guns N’ Roses, Gene Simmons said in an interview with Music News Web back in 2011 (Transcribed by Rock and Roll Garage) that the group didn’t became the biggest band in the world because of Axl Rose’s behavior: “You get to sleep in the bed that you make. It’s simple, if you are lucky enought to be accepted on stage by the audience. If you are lucky enought to write a song. If you’re lucky enough to have charisma on stage, that’s the beginning.”

“Then you’ve got to be able to deliver night, after night, after night. Not everybody is designed to run a marathon. Because to be a rock star for decades means you’re running a marathon. Guns N’ Roses could have been the biggest band in the world. The reason they’re not is because of Axl Rose. I mean, the drugs, the heroin, the alcohol and all that. But ultimately it falls on Axl’s shoulder.”

When Brian Johnson had to leave AC/DC in the middle of the Rock Or Bust tour back in 2016 due to hearing problems, Angus Young invited Guns N’ Roses vocalist Axl Rose to help the band to finish the tour dates. Many fans criticized the choice because they thought Brian Johnson was fired from the group. But many fans loved the idea and one of them was Gene Simmons.

In an interview with Montana’s The Eagle 105.7 back in 2018, Simmons said: “I think it was fantastic. Axl in AC/DC was the best thing that could have happened for both bands. I don’t know how long it will last. But I heard the shows were great, and Axl and the AC/DC guys are really cool.”

“Kiss called AC/DC to open the shows on their first tour. Among the bands that have had their first tour with us are AC / DC, Rush, Cheap Trick, Motlëy Crüe, Bon Jovi, Judas Priest, Iron Maiden … the list is very long”