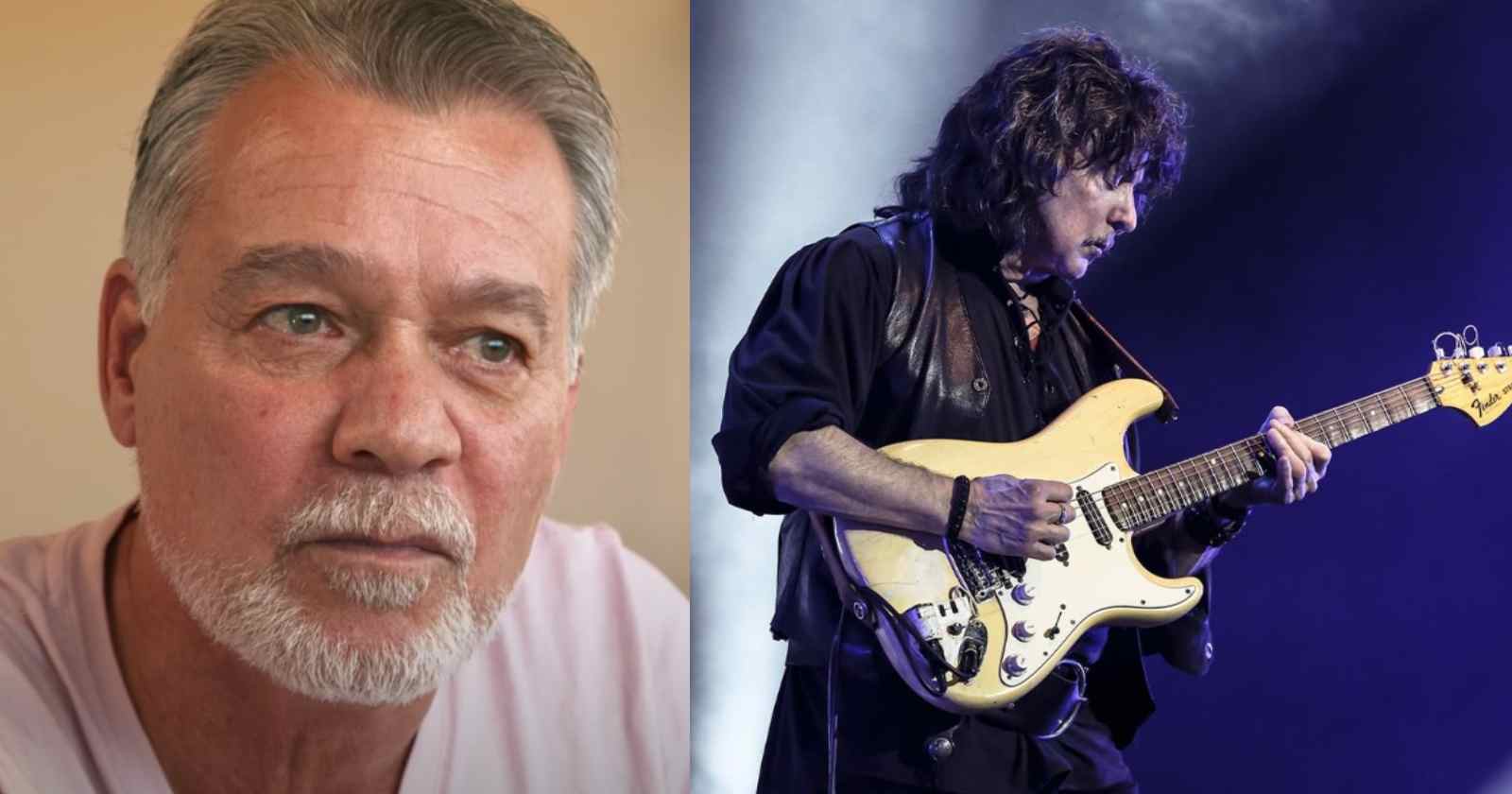 The British guitarist Ritchie Blackmore is the founders of Deep Purple, band that became one of the most important in the history of Hard Rock music. The musician was part of the group from 1968 to 1975 and from 1984 to 1993. He also was successful with his own band Rainbow, especially in the late 70s and early 80s. Over the decades many of his peers gave their opinion on his playing. One of them was the late legendary guitarist Eddie Van Halen.

What is Eddie Van Halen’s opinion on Ritchie Blackmore

It’s not surprising that Ritchie Blackmore was a big inspiration for Eddie Van Halen, since the British musician created many fast guitar riffs and solos. He influenced countless generations of musicians that would later on be known for their speed and technique.

Talking with Billboard magazine  in 2015, Van Halen revealed which his favorite guitar riffs of all time. One of them was the one in the classic Deep Purple song “Burn”, released on the album of the same name released in 1974. It was the first one to feature singer David Coverdale and bassist Glenn Hughes.

But it wasn’t just the Blackmore riffs that Van Halen admired. The musician said in a conversation with Rolling Stone in 2011 that he also liked the vibrato bar used by the musician. “Ritchie Blackmore I liked because of his vibrato bar use on ‘Deep Purple in Rock’ (1970). Also, they come out with great riffs. I mean, come on, “Smoke on the Water” is one for the history books.”

In an interview with Classic Rock magazine in 1978, when Van Halen had just released their successful debut album, Eddie already had praised Blackmore, saying that he was the one that got him “hooked on the whammy bar”.

There are many videos that show Eddie playing Deep Purple riffs in the backstage and at his famous studio “5150”.

Curiously, the first time Eddie Van Halen had the chance to meet Ritchie Blackmore he was accompanied by the also legendary guitarist Gary Moore.

Airey, who is currently Deep Purple’s keyboard player, recalled in an interview with Mulatschag TV back in 2020 (Transcribed by Rock and Roll Garage) that he arranged that meeting when he was a member of Rainbow.

“There was once when Gary Moore first went to L.A he befriended with Eddie because for the first time in his life he had someone that seriously frightened him. They came to a Rainbow gig at Long Beach. And they both looked so young, especially Eddie.”

Ritchie Blackmore was not a big fan of the “tapping” as he told Guitar World magazine in 1991 but he said Eddie saying he was probably the most influential player in the last 15 years. Eddie  started the “tapping” movement without his intention. Everything started after the first Van Halen album that led almost all Hard Rock guitarists started copying his technique.

After Van Halen’s death at age of 65 back in 2020, Ritchie Blackmore released an statement saying that the Dutch guitarist changed the guitar and was the “ultimate guitar hero”.

“Eddie Van Halen was a brilliant guitarist who started a technique of guitar playing which was emulated by a whole generation of guitarists”.

“He was one of the nicest musicians I ever met in the music business. Very shy and not at all conceited about his ability as a guitar player. Frank Zappa said he reinvented the guitar. I agree. He will be sadly missed. But his brilliant legacy will always be remembered. The ultimate guitar hero,” Ritchie Blackmore said.