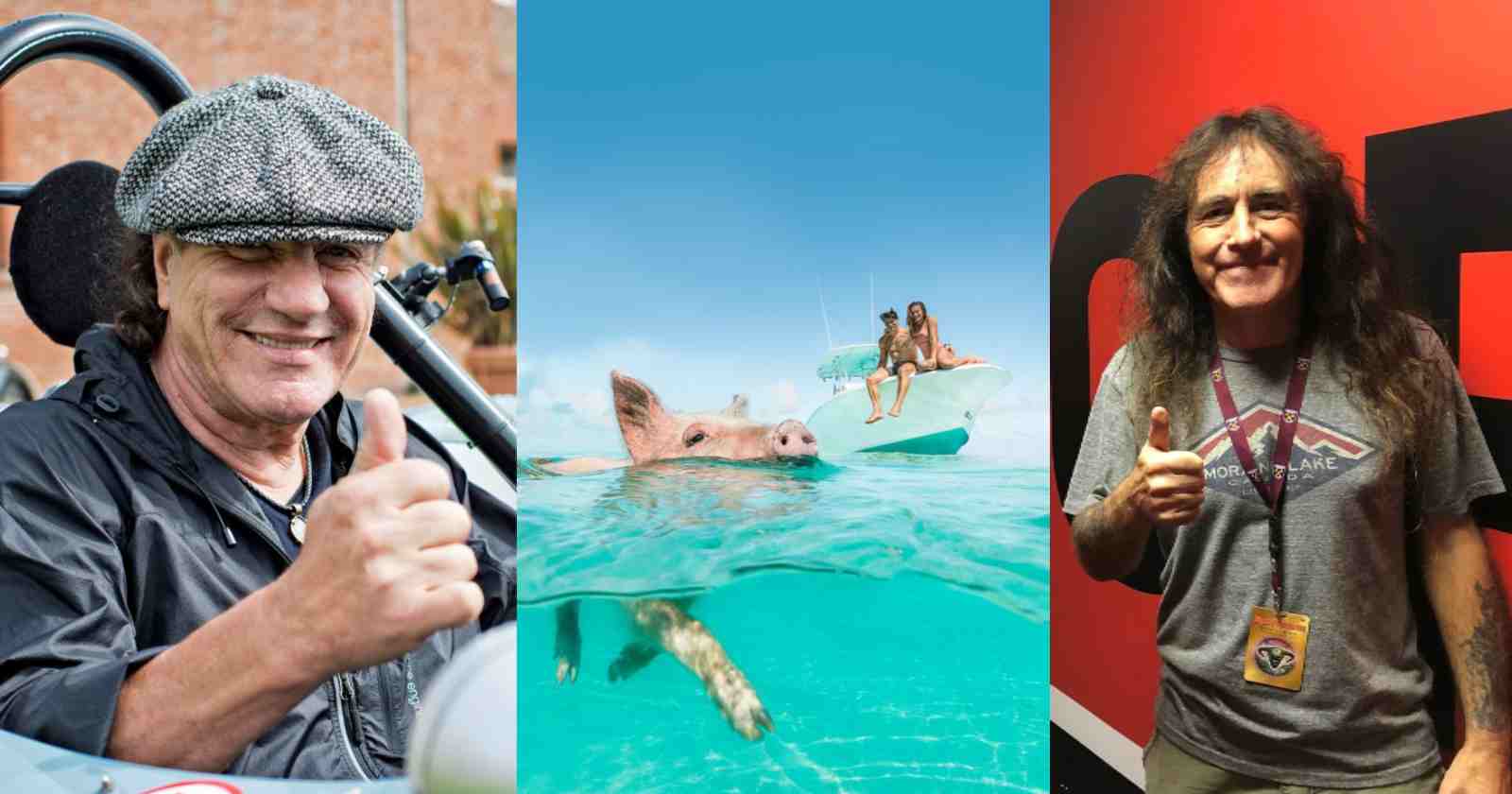 The most successful Hard Rock and Heavy Metal bands of all time came mostly from the United Kingdom and United States. However, some of the greatest and best-selling albums of those groups were recorded in the Bahamas, famous small island located within the Lucayan Archipelago of the West Indies in the Atlantic ocean.

The country that nowadays has an estimated population of 400.000 people, received especially in the 80s, big heavy rock bands like AC/DC and Iron Maiden at the famous “Compass Point Studios”. The studio was located on the island of New Providence, 10 miles west of Nassau, the capital of the country. Rock and Roll Garage selected 7 classic Hard Rock and Heavy Metal albums that were recorded there.

Founded back in 1977 by Chris Blackwell, the owner of Island Records, a Jamaican record company that was for many years based in the United Kingdom, The Compass Point Studios was made to be a recording facility supported by in-house sets of artists, musicians, producers and engineers, all dedicated to a specific and recognisable sound and style.

The session band at the studios, as well as visiting recording artists, became known as the Compass Point All Stars.

Released in 1980, “Back In Black” was the first AC/DC album after the death of their classic singer Bon Sott and the first one to feature Brian Johnson on vocals. The record was for a long time the second best-selling album in history. It has an estimated amount of 50 million copies sold worldwide. Some of the most famous songs besides the title-track are “Hells Bells”, “Shoot to Thrill”, “You Shook Me All Night Long” and “Rock and Roll Ain’t Noise Pollution”.

Brian Johnson joined the band and went to the Bahamas and they stayed there for about 6 weeks to make the record as he recalled in an interview with WMMR’s Pierre Robert back in 2021.  “I was just a working boy. When I got to the Bahamas, Malcolm and Angus came to me and said, ‘Hey, by the way, can you write lyrics?’ I went, ‘Well, I’ll give it a shot.’ The first night, they brought me a legal pad. Yellow legal pad, a pen and a little cassette player.”

“I don’t know… I remember just sitting there [and thinking], ‘What have I got to lose? I’ve got a week’s holiday in the Bahamas, at least.’ I wrote it down in about 20 minutes, honestly. I went, ‘That’s it.’ I took it to them next day, and they said, ‘Sing what you’ve written.’ What you hear is basically [what I sang] that first day. As soon as it finished, I went, ‘I like that. That’s a good little song.'”

AC/DC “Flick Of The Switch”

After recording the famous album “For Those About To Rock (We Salute You” (1981) in Paris, AC/DC decided to got back to the Bahamas for “Flick Of The Switch”. The record didn’t became one of the most important albums of the band. It failed to have the same commercial success that the previous ones had.

None of the tracks of the record became biggest classic of the group. But the most famous ones are the title-track, “Nervous Shakedown” and “Guns For Hire”.

Released in 1986, “Turbo” is one of the Judas Priest albums that fans love or hate. Specially because it was the first time that the group used synthesizers in their songs. The use of the instrument made their sound shift a little bit to a more commercial Metal approach. Some of the most famous tracks of the album are “Turbo Lover” (That became present on the band’s live setlist over the decades), “Parental Guidance” and “Out In The Cold”.

In an interview with Rock Cellar Magazine in 2022, bassist Ian Hill said that “Turbo” was one of the band’s albums that deserved more recognition: “The experimental Turbo album, which met with mixed reviews. Some people loved it, some people hated it. We lost fans and we gained fans.”

The first Maiden album recorded in the Bahamas, “Piece Of Mind” was also the first one to feature drummer Nicko McBrain. A commercial and critical success, the record have classic tracks like: “Where Eagles Dare”, “Flight Of Icarus” and “The Trooper”.

Iron Maiden is the most famous Metal band that recorded more albums in the Bahamas. Steve Harris, the founder, bassist and main lyricist of the group has property there. He revealed in interviews over the decades that he spent a lot of time there even when there were no records being made by him.

In an conversation with “The Nolan Show” back in 2017, Bruce Dickinson recalled his feeling of being a Rock star and when the group went to the island record the album: “No, you’re in it, and you do realize it’s pretty big, because you’re on telly and things and you’re thinking, ‘Wow’. And [you wanna] pinch yourself, this is all happening. Then the next thing we’re going out, we’re doing an album in the Bahamas. I’m thinking, ‘This is proper rock-star stuff here. How did I end up doing this?”

Released one year after “Piece Of Mind”, “Powerslave” was also recorded at the Compass Point studios in Nassau, Bahamas. Another successful Maiden album, the record had classic tracks like: “Powerslave”, “Aces High”, “2 Minutes To Midnight” and “Rime of the Ancient Mariner”.

When promoting his book about the love for fishing, “Monsters of River and Rock: My Life as Iron Maiden’s Compulsive Angler”, Iron Miaden guitarist Adrian Smith recalled in an interview with The Metal Voice back in 2020, a funny story of when he was fishing in The Bahamas during the making of “Powerslave”.

“Sometimes the fishing and the music literally cross lines. Like when Maiden were doing the Powerslave album in the Bahamas at Compass Point studios (I always take my fishing rod wherever I go). So when I had some time off I was fishing outside the studios in the Caribbean. I cast out and I got tangled up with another line and it turned out to be Robert Palmer, addicted to love, that guy. Who came out running from his balcony and told me off, literally like that,” Adrian Smith said.

The third consecutive Iron Maiden album to be recorded at the Compass Point studios in Nassau, Bahamas, “Somewhere In Time” (1986) also became one of the band’s most successful records. Some of the most famous tracks of the record are: “Caught Somewhere in Time”, “Wasted Years” and “Heaven Can Wait”.

In an interview with Hard Rock Magazine (France) back in 1986, Bruce Dickinson said that most part of the band wasn’t happy to record the album in the Bahamas again. “Adrian, Dave and myself weren’t too hot to go back to the Bahamas. We already recorded two albums there. We didn’t like the idea of going back there. It’s difficult to explain…”

“It was like ‘going back to work’ after a holiday, a kind of routine. Here, in the Bahamas, life is too laid-back. You’re more inclined to nap in a deck-chair than to go and play your guitar. It reminds me of those Westerns where you see sleepy gringos with a large hat when the sun’s a bit too strong.”

“Here, it’s the same. We would have found the same atmosphere, the same climate, the same feeling, the same sound. I wanted to break this routine, break the circle. Steve and Nicko, on the other hand, were really happy to come back here, because they get a great bass and drum sound. So we finally agreed on the following compromise. The bass and the drums would be recorded here, and all the rest in Holland”.

24 years after the making of “Somewhere In Time” (1986), Iron Maiden cameback to the Bahamas to make “The Final Frontier” (2010). The record had a good critical reception and the the two most famous tracks are “Satellite 15… The Final Frontier” and “El Dorado”.

It was one of the last albums to be made at Compass Point studios. Maiden recorded from January to March and the studio was close in September, 2010. According to the website of the studio, it was shut down due to “a series of incidents…socio-political-based happenings which made it untenable to continue doing public business in The Bahamas”.