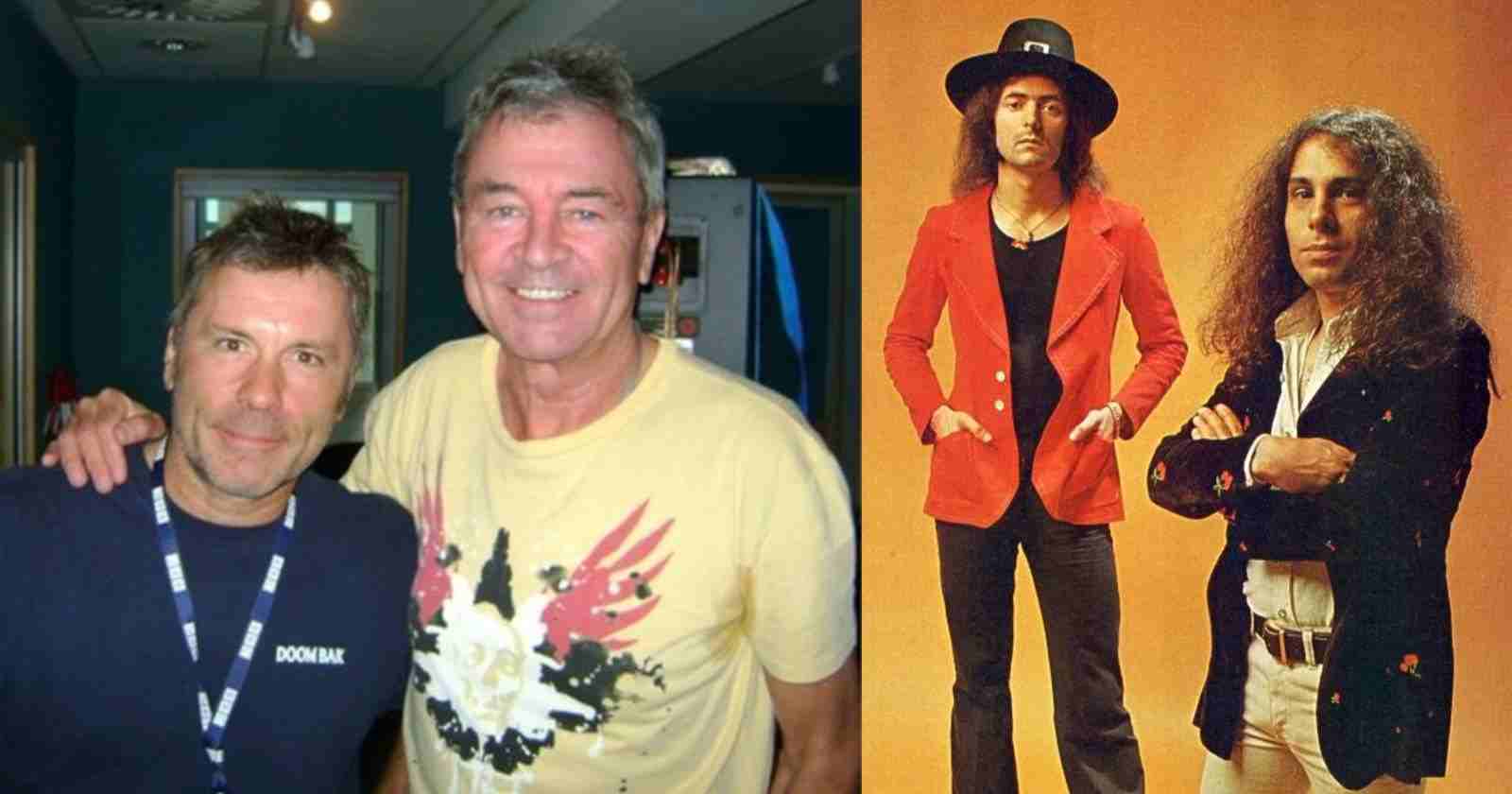 Deep Purple is one of the best rock and roll bands of all time that inspired many famous musicians. Youtube Channel Raised On Radio gathered many quotes of rockstars revealing their favorite song of the band in interviews.

The best Deep Purple songs according to Bruce Dickinson, Dio and more:

“It’s just one of those tracks, that is not played very often, but it’s got some phenomenal bits in it. And of course, it’s also got – I mean, having been a drummer or at least aspired to being a drummer, I have huge respect for drummers, and Ian Paice is simply one of the finest drummers in the world, he really is.”

“And I suppose if you’re going to be a drumming nit-noid type guy, it’s his foot, it’s all down to his foot.”

“I know people say [Black] Sabbath are the greatest metal band, which they are, and they were the first, but I think Purple deserve a mention in there.

“So I put in a Purple track that is very aggressive and fast – it’s one of the places where we get some of our influences from. Such a great band, such a great singer, Ian [Gillan] – and he’s still singing great. We played with them quite a lot of festivals and things, I’m still quite amazed that he sings well, you know? And Ian Paice’s drumming, it’s great – it’s great.”

“My cousin, Dave Wheeler, he took me to my first gig; he’s two years older than me, and I was listening to whatever I could, you know? I love Motown, I love reggae, love rock, obviously The Beatles, The Stones, The Kinks, anything like that… Beach Boys, American stuff, Aretha Franklin – everything and anything.”

“And then he said, ‘Check this out.’ It was Deep Purple and that was the first gig I went to when I was 14 at Brixton Sundown, which is now the Academy. “That actually made me play guitar. So it was front row, Ritchie Blackmore, it was the [1972’s] ‘Machine Head’ tour. For two years, I pestered my mom and dad for a guitar, and that was it, really.”

“I didn’t want to put ‘Smoke on the Water’ down because everybody puts that down, but you know, my heroes were Ritchie [Blackmore], I didn’t know Roger [Glover], I didn’t know Ian, they were kind of subliminal parts to all that.”

“I knew of course of Ritchie and of Jon [Lord], who were the really the movers and shakers of that band at that time. Ian [Gillan] was a great singer – I didn’t aspire to be Ian, he had this voice that was unto only himself, and I didn’t think I could do that one.”

“So they were in New York at the time, and one of them had come down with some rare disease and had to stop the tour. Roger and Ian [Paice] stayed behind to explore New York. And at that time, my band Elf was auditioning for the famous Clive Davis – he’s the man who discovered Aretha Franklin, [Bob] Dylan, everybody – just everybody and everyone.”

“And at the same time because Roger and Ian were there, they were coming too. That put us in quite a turmoil because Clive Davis we could kind of put up with. But two of our heroes, oh my lord… So they were there at the audition, we were told at the last moment that Roger and Ian were coming in; we knew Clive was gonna be there. So we did our audition and Roger, in particular, said, ‘This is unbelievable’. Because the kind of music we were playing at that time was a little bit more to the honkey-tonk side.”

“We had a piano player that was one of the featured instruments. It’s hard not to be honkey-tonk if you’ve got a piano in there, and Roger just loved that kind of music. He was into the band Little Feat, and we were somewhat like that.”

“And Roger just flipped and wanted to do it. Ian said, ‘OK, I’ll do it too,’ and he kind of went along with Roger. So we did our very first album in Atlanta, Georgia – we took our first plane ride, frightened to death, and down we went, did the album… And Roger, to this day, has become one of my dearest friends on earth, and one of my mentors, one of the most talented men I know on earth. Ian [Paice] also became a friend – what a great drummer, and just a great person.”

“So that was my introduction to my other heroes, and through that, I met Richie, and Richie then asked if I would like to put a band together with him because he was going to be leaving Purple. And I mean, what an incredible opportunity.”

“Well, I got a long association with the Purple guys, as most people know – and such a huge fan – Jon Lord and Ian Paice, through playing, and the [short-lived supergroup] Paice, Ashton, Lord thing in the mid-’70s. And I was never really a Deep Purple, I suppose ‘fan’ is the word. Because in that period I was listening to Fleetwood Mac or Chicken Shack, B.B. King, anybody from the States who played electric blues.

“And obviously I was a Cream fan, that kind of thing. So the Deep Purple thing never really came into my world. Only after I was playing with these guys I realized what superb musicians they were and how I had to really up my game.

“But then by listening to some other stuff I realized the songs were pretty damn good. We used to play ‘Burn’ a lot in soundchecks because only Ian Paice could really play Burn. I used to really enjoy it.

“And then seeing them play it live, I managed to see Deep Purple several times before the end, Cozy [Powell, drums] was playing with Rainbow at the time so I’d go down there, so I saw the last lineup with Tommy and stuff, I saw them with Ritchie as well, and I just thought, ‘Now I know what it was all about.’ Because they were very, very exciting live – and great musicians. ‘Burn’ just, to me, sums up that whole Deep Purple thing for me.”

“I was about 16, I think, when the album [‘Machine Head’] came out, and I went to Sheffield City Hall to see them, and at the point, I went to the gig, I didn’t really know much about them. I’d heard of them. But I hadn’t heard that record. A friend got us a ticket and I went along with him and I sat there in Sheffield City Hall. I’d never heard or seen anything like it in my life.”

“I remember there and then thinking, ‘This is what I’m gonna do. Nothing is better than this, this is the best thing I’ve ever seen.’ And so Deep Purple, although I don’t think I’m very influenced by them musically, they are the reason that I do this for a living.”

“The old stuff is great. But that was when they came back, and I remember going to see them in Stockholm with the band. We went there, and they were making a comeback, and actually with some great sounds and great songs.”

“They actually surprised me when they came with that album, ‘Perfect Strangers’ – it was amazing. And all through our lives together, as a band, we’ve been listening to Deep Purple.”