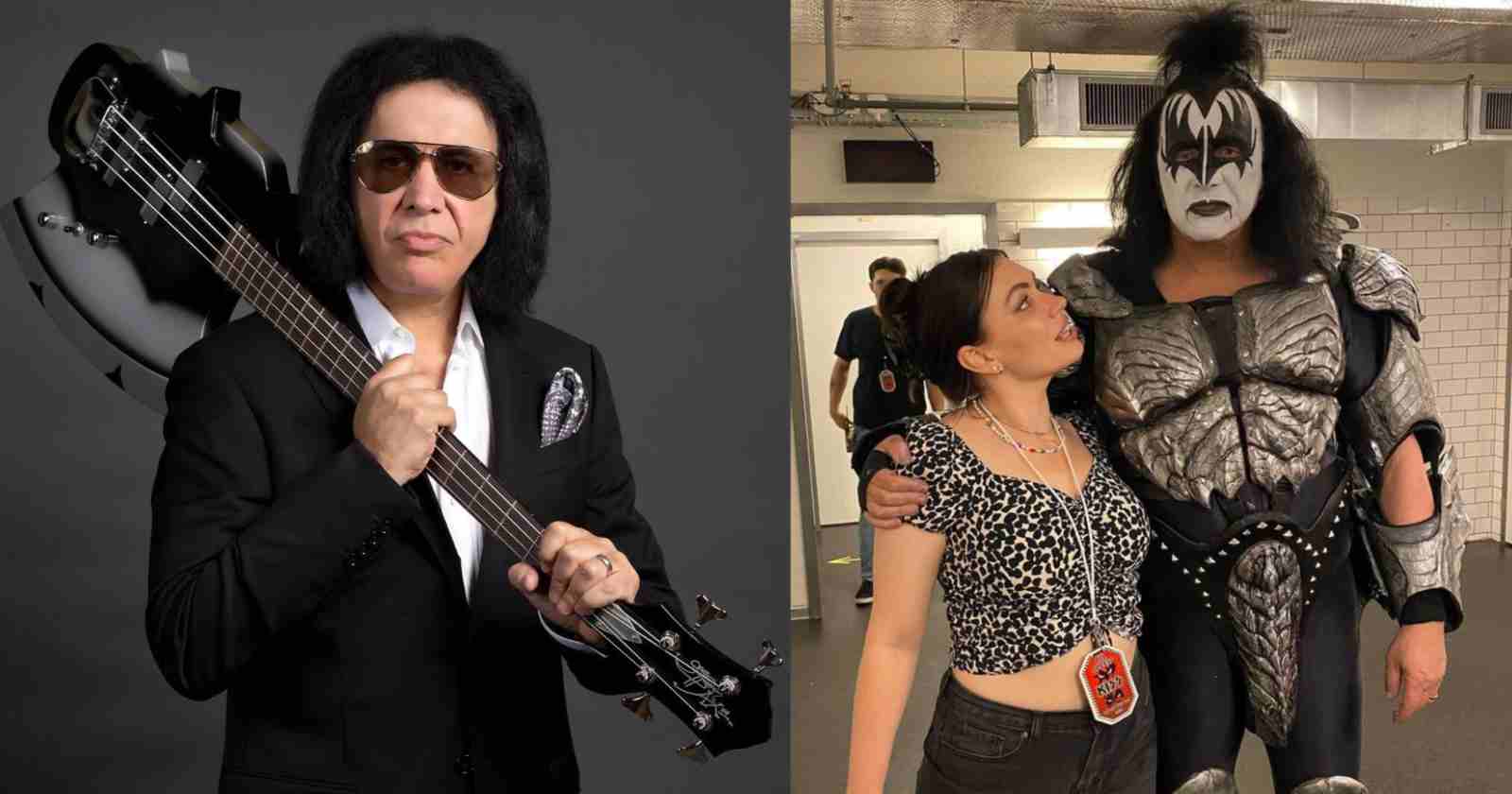 The Kiss bassist and singer Gene Simmons is one of the most influential Hard Rock musicians in history and helped the band to become one of the best-selling of all time with an estimated amount of 100 million records sold worldwide. Many songs composed by him became favorites of millions of fans over the decades. As any music fan he also has favorite tracks and he revealed in an interview with Sirius XM back in 2018 the 10 songs he can’t live without. Rock and Roll Garage selected what the musician said over the years about the bands that composed the songs and his connection with some of them.

Mott the Hoople “All the Young Dudes”

“I always liked Mott The Hoople, starting with the name. I thought, ‘What a bizarre thing.’ And when I heard Ian Hunter, the lead singer, doing his ‘Bob Dylan-isms,’ you kind of sing and talk at the same time. So they were about to break up, their career was over. They just couldn’t get hits. David Bowie had known them because they came from the same town. He had met Ian Hunter and the guys.”

“They were saying: ‘Yeah. Well, thanks a lot. It was great knowing you. When are you playing?’ And they go ‘No, we are breaking up. We can’t make heads or tails. We can’t get a hit.’ He goes: ‘Well, you know. I’ve got two songs I’m not recording. Listen to them and see if you want them.'”

“One of them was Suffragette City and they go: ‘No, we don’t like that. What else?’ (The other one was) ‘All The Young Dudes’, David Bowie singing the lead. It is astonishing because it immediately says there’s something here that’s grand. Sounds ‘anthemic’ coming from the word ‘anthem’. I’m still not sure what the news is. ‘All the young dudes carry the news’. But who cares?”

“Because ‘wop bop a loo bop a lop bam boom’ (Little Richard’s ‘Tutti-Frutti) doesn’t mean anything. And neither does ‘Ooga-chaka Ooga-chaka’ (Blue Swede’s ‘Hooked On a Feeling’). But if it feels right, because music is feeling. So when I heard ‘All The Young Dudes’ by Mott, it wasn’t just a career saver for them. It was one of those songs that carved it’s own niche in what a great song can be,” Gene Simmons told Sirius XM

As the Kiss bassist and singer said, ‘All The Young Dudes’ was written by the legendary David Bowie and first recorded by Mott The Hoople, being released as a single in 1972.

Often recalled for being one of the first musicians to use face painting, Arthur Brown was a big inspiration for many psychedelic artists that appeared in the late 60s and during the 70s. The band’s 1968 self-titled debut album had their biggest hit “Fire” and reached number 7 on Billboard’s Pop Albums chart. Curiously, the executive producer of the record was The Who’s guitarist and main lyricist Pete Tonwshend.

In a conversation with Music Radar back in 2017, Gene Simmons talked about the song, saying: “Here’s this guy, covered in make-up, half-naked, dancing around like a lunatic. And he’s wearing a crown of flames! Even as a young kid, I felt a connection. This is cool!”

“We were still seeing bands come out in three-piece suits singing love songs. But this guy comes out screaming, ‘I am the God of Hellfire’. Did Arthur Brown influence Kiss? I think so. God of Hellfire… God of Thunder. The flames, the make-up, the craziness. This isn’t just music. It’s Victorian opera mixed with Greek tragedy, all filmed by Hammer Horror. Oh, how I wish there were more bands like this today,” Gene Simmons said.

Formed by the legendary Small Faces guitarist and singer Steve Marriott in 1969, Humble Pie also had guitarist Peter Frampton, who also would later become a successful solo artist. “30 Days in the Hole” was first released by the band as a single in 1972 and included on their album “Smokin'”.

Talking with Tampa Tribune in 2014 about who he would put into the Rock and Roll Hall Of Fame if he had the power to do it, Gene cited Humble Pie, saying: “So I would put Run DMC, who I believe are very good, and the rest of hip-hop into the Hip-Hop Hall of Fame. I would take Madonna and Donna Summer, who was a dear friend, and put them in the Disco or Dance Hall of Fame. I would put Deep Purple in the Hall. The fact that Blondie got in before Humble Pie is crazy,” Gene Simmons said.

Talking with Billboard back in 2012, Gene Simmons listed Led Zeppelin as one of the bands that influenced Kiss the most. “Communication Breakdown” was first released by the British band as a single back in 1969 and included on their self-titled debut album.

In an interview with Music Radar in 2017, Gene praised the track, explaining that Jimmy Page was part of the same scene as Jeff Beck and was influenced by his colleague, but he took things to another level: “So, what did Led Zeppelin bring to the table? More balls! Fucking great big, huge balls! Steam hammer balls! Once they get rollin’, there’s nothing that can stop them. Even before the song starts, you’ve got that machine gun riff. What the fuck is that? Woah!”

“Then, bang, the song really kicks in. You’ve got Plant’s voice wailing over the top like some kind of demented witch. And don’t forget that this happening at the same time as Miles Davis, Hendrix, the Beatles and the fucking Bee Gees. Enough incredible music to make your head explode!”

First released as a single by Cheap Trick in 1978 and then included on their album “Heaven Tonight”, “Surrender” became one of their biggest classics. It was their first single to enter the Billboard Hot 100 chart.

Simmons loves Cheap Trick and in 2016 Kiss even had the guitarist Rick Nielsen playing on stage with them during “Rock and Roll All Nite”. One year later, Simmons had the chance to introduce Cheap Trick to the audience before a benefit show.

The relationship between the two bands goes way back in the 70s when Kiss had Cheap Trick as their opening act on tour.

“My Hero” is not only one of the songs Gene Simmons can’t live without. Also is from an album that is one of his favorites of all time as he told The Quietus back in 2015. From Foo Fighters‘ second album “The Colour And The Shape” (1997), the track still is one of their biggest hits.

“The thing about this band is that it came out of a grunge background. Obviously Dave came out of Nirvana. But he can play guitar just as well or better than Kurt, sings great. The most interesting thing I find about Foo Fighters, and songs like ‘My Hero’, is that they are based in pop melodies. Not based in the blues. Which is really interesting, having that big wall of sound guitar thing with pop melodies and interesting lyrics. Just an interesting band,” Gene Simmons told The Quietus.

Over the years the Kiss bassist and singer said many times that Rock and Roll music was dead, mostly because of the fans who downloaded for years the songs for free in the internet. He often uses the Foo Fighters as an example of the latest great band that appeared in Rock music.

Lou Reed “Walk on the Wild Side”

First released by Lou Reed as a single, “Walk On The Wild Side” was also included on his 1972 album “Transformer”, his second solo work outside Velvet Underground. That record was produced by his friend David Bowie and guitarist Mick Ronson.

Curiously, Lou Reed tried to help Kiss compose some songs a few years after. Gene Simmons recalled in an interview with Classic Rock back in 2016 that producer Bob Ezrin took the musician to Kiss rehearsals for the album “Destroyer”. The idea was to try to to give them another angle on the lyrics they were working on. But the partnership didn’t work at that moment. Ezrin had previously worked with Reed at the time and they were friends.

However, he helped Kiss in the early 80s to compose tracks that were featured on the not well received album “Music From The Elder” (1981). Lou Reed is credited on tracks like “Dark Light”, “A World Without Heroes” and “Mr. Blackwell”.

“Bob Ezrin started rehearsing with us for the Destroyer record in 1975.  He had just come off working with Lou Reed on Berlin. We rehearsed in a place called Carol’s on 42nd Street and 6th Avenue in New York City. Lou walked in and I’d been aware of, and had been a big fan of, Walk On The Wild Side, which was produced by David Bowie and Mick Ronson. Reed walks in, we’re rehearsing, trying to work out songs.”

“Bob says that he would like Lou to work on lyrics with us and maybe get another angle. But it didn’t work out, actually. We went off and did Destroyer. Because we couldn’t wait to put all these new songs down, like Detroit Rock City and Flaming Youth and all that,” Gene Simmons said.

Considered one of the riffs that were crucial for the creation of Hard Rock and Heavy Metal music a few years later, “You Really Got Me” had a really heavy guitar sound for 1964, the year it was first released by The Kinks as a single.

A huge influence to many heavy bands the song was successfully covered by Van Halen on their self-titled debut album in 1978.

The most soft song on the list, “Tossin’ and Turnin'” was first released by singer Bobby Lewis as a single in 1961 and it reached number 1 on the Billboard Hot 100 and R&B charts.

Some other famous Bobby Lewis tracks are: “One Track Mind”, “How Long Has It Been” and “Just A Drink Away”.

Thin Lizzy “The Boys Are Back in Town”

One of the biggest hits of the legendary Irish band Thin Lizzy, “The Boys Are Back In Town” was first released on their successful 1976 album “Jailbreak”. Written by the bassist and vocalist Phil Lynott the song even won the NME award for best single that year.

Some of their other most famous songs are: “Whiskey In The Jar”, Cowboy Song”, Jailbreak” and “Rosalie”.