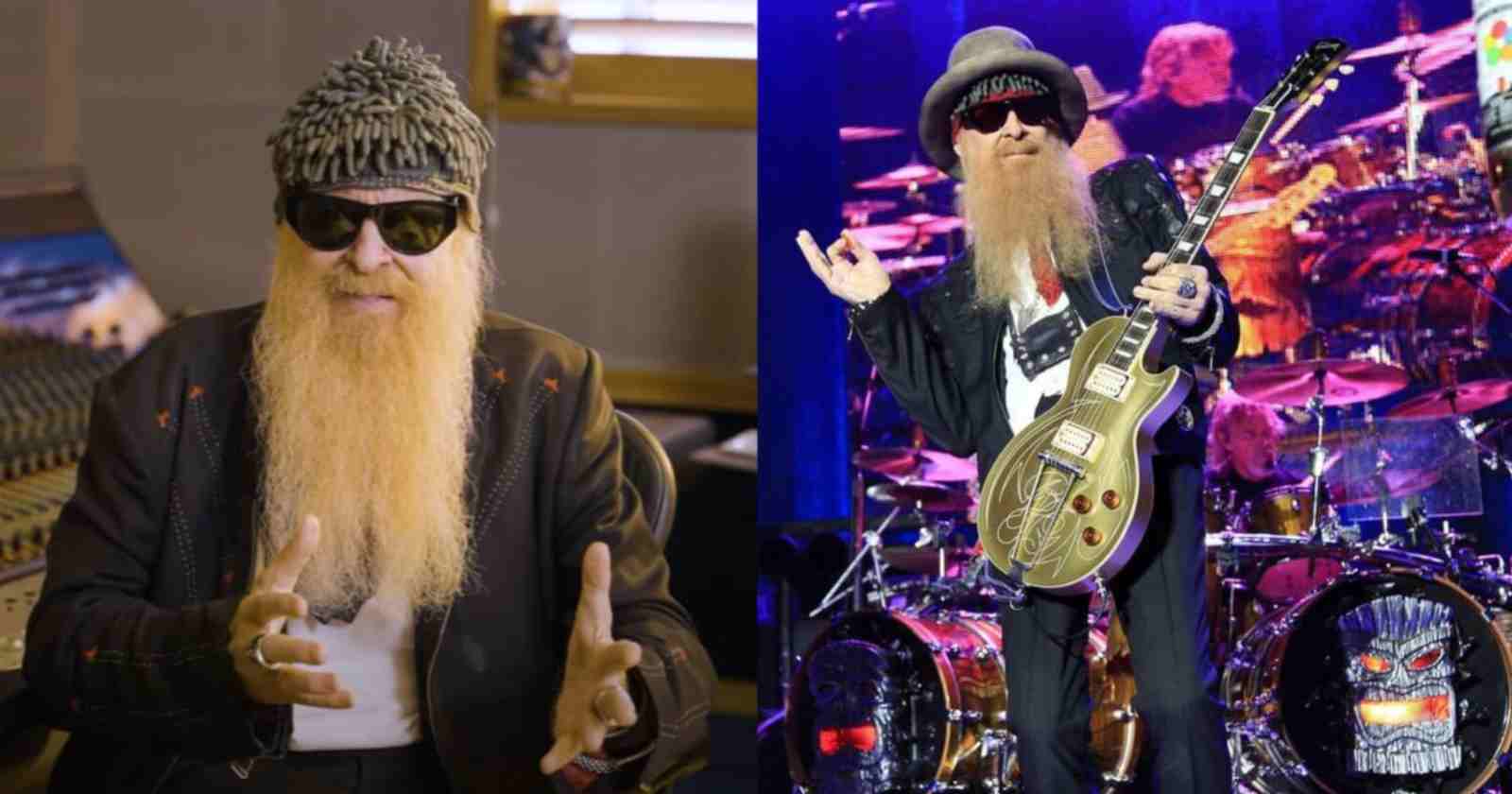 The ZZ Top guitarist and vocalist Billy Gibbons is considered one of the greatest Blues Rock musicians in history, being responsible to reinvent the genre with his bandmates Dusty Hill and Frank Beard. In an interivew with Texas Highways back in 2017, Gibbons listed 9 Blues musicians that influenced him and Rock and Roll Garage selected what Billy Gibbons said about those musicians over the decades.

Billy Gibbons was inducted into the Rock and Roll Hall of Fame as member of ZZ Top back in 2004 by Keith Richards, who said in his speech: “These cats know their Blues, and they know how to dress it up”.

One of the first songs that Billy Gibbons learned to play on the guitar was a Jimmy Reed song as he revealed in an interview with Rolling Stone back in 2015: “It was Christmas day 1962 at the age of 13 and the first guitar landed in my lap. It was a Gibson Melody Maker, single pickup. I took off to the bedroom and figured out the intro to ‘What’d I Say,’ by Ray Charles. Then I stumbled into a Jimmy Reed thing. He was the good-luck charm. I’d play Jimmy Reed going to sleep at night and in the morning.”

A few decades later, in 1991, Jimmy Reed was posthumously inducted by ZZ Top into the Rock and Roll Hall of Fame. During his speech, Gibbons said: “I can’t buy a car without first playing a Jimmy Reed tape before driving it”.

In an interview with Classic Rock magazine in 2016, Billy Gibbons said that what made him want to pick up a guitar was listening to Jimmy Reed and he named his first single “High And Lonesome” as one of his favorite tracks.

In a conversation with Smashing interviews back in 2013, Gibbons said that watching Blues players like Howlin’ Wolf play live when he was a kid was an experience that influenced his playing: “We got to see B.B. King, Jimmy Reed, Howlin’ Wolf and another great Houston guitarist by the name of Albert Collins. I suspect this was a big part of what began shaping the kind of sounds I really enjoyed hearing.” Gibbons covered Howlin Wolf’s song “Rollin’ and Tumblin'” on his 2018 solo album “Big Bad Blues”.

His most famous songs are “Spoonful”, “Smokestack Lightin’”, “Killing Floor” and “How Many More Years”

Muddy Waters was one of Billy Gibbons heroes. In 1981, two years before his death, he was ZZ Top’s opening act during some dates. In an interview with Rolling Stone magazine in 2004, Gibbons recalled that tour, saying: “This was over forty years after his first recordings, and that band could still play the blues. Not just as seasoned pros but with the same enthusiasm Muddy had when he started out. When he sang that his mojo was working, you could tell his mojo had not slowed down at all.”

Gibbons covered the Muddy Waters song “”Standing Around Crying”” on his 2018 solo album “Big Bad Blues”. Born in Issaquena County, Mississippi in 1913, Muddy Waters was one of the most influential Blues musicians in history.

Among Muddy’s most famous songs are “Mannish Boy”, “I’m Your Hoochie Coochie Man”, “Rollin’ Stone” and “Got My Mojo Working”. He also was inducted into the Rock and Roll Hall of Fame back in 1987 by Paul Butterfield.

Another big inspiration for Billy Gibbons, T-Bone Walker was born in Linden, Texas back in 1910. He was a pioneer and innovator of the Jump Blues and Electric Blues sound. Some of his most famous songs are “Call It Stormy Monday” and “Mean Old World”.

In an interview with Guitar World in 2021, Billy Gibbons shared his love for T-Bone Walker, saying: “T-Bone Walker, from down in the Beaumont area. Even today, years and years after T-Bone’s passing, there are guitar players, including me, trying to figure out how he created those remarkable sounds and licks while his guitar was lying flat in front of him.”

“Of course, T-Bone could do it behind his back, doing splits on the floor, standing straight, whatever. A fretboard genius who never failed to inspire and remains a delightful force to this day.“

Known for being a Psychedelic Rock pioneer, Roky Erickson was a Texan guitarist and singer from The 13th Floor Elevators, band that Gibbons always praised over the years.

The ZZ Top musician had the chance to play live with Erickson several times and he played on Roky Erickson’s tribute album released in 2021, two years after his death. In an interview with ABC Audio to promote the tribute record, Gibbons revealed that Erickson’s group inspired him to create the band he was in before ZZ Top: “(The 13th Floor Elevators) inspired me to start a group following in their footsteps called The Moving Sidewalks.”

“Elevators go up, sidewalks move forward. So it was a match made in heaven. We had a great admiration for everything that Roky did. And to this day, they remain great inspirations.”

Also known as “The Ice Man”, Albert Collins was born in Leona, Texas back in 1932. He was one of the most important Blues guitarists in history, known for his powerful playing and for the use of altered tunings and a capo.

In an interview with Guitar World in 2021, Billy Gibbons talked about the best concerts that he ever been to. One of those shows was from Albert Collins and the musician recalled the experience, saying: “Having grown up in Texas, I had the opportunity to see a plethora of truly fantastic, wholly original blues guitarists rom all over the state during my formative playing years. Freddie King was from up north in Dallas. Albert Collins was in Houston and Gatemouth Brown was from the Gulf Coast.”

“Each of them was mind-bending each time I could see them and see them I did. Seeing those guys was great inspiration. Their playing styles were just as inspirational as anyone. They were so unique that every performance showed how it was possible to do your own thing.”

The oldest musician on the list, Lightnin’ Hopkins was born in Houston, Texas back in 1912 and Rolling Stone magazine ranked him number 71 on their list of the “100 Greatest Guitarists of All Time”.

In an interview with Brightest Young Things back in 2016, Gibbons praised the guitarist and recalled that the wave of British Blues players embraced that sound: “Lightnin’ Hopkins was something of a fixture on the Houston coffee house scene so we were witness to eccentric blues brilliance close up.”

“Then, believe it or not, along came the wave of the English cats like John Mayall, Eric Clapton and the Stones embracing the great American art form – the blues. I probably owe as much to Jeff Beck as I do to Son House with connections to the blues.”

Another guitarist from Texas that inspired Billy Gibbons, Doug Sahm was an important name of the Tex-Mex music and first achieved fame with his band Sir Douglas Quintet. His most famous song “She’s About A Mover” was released in 1965.

Another musician from the Sir Douglas Quintet and Texas Tornados, Augie Meyers was a multi-instrumentalist, recalled for playing mostly guitar and keyboards. As a studio musician, Augie played with famous artists like Bob Dylan, John P. Hammond, Tom Jones and Tom Waits.

Gibbons recalled in an interview with Paste magazine in 2021 that he called Meyers when he was recording “Hey Baby, Que Paso”: I called him up and said, ‘Hey, Augie—we’re sitting around in the studio. We’re listening to different songs and we came across ‘Hey Baby’ from the original 45 rpm single. But we can’t quite make out the second verse. We can’t quite make out what you’re singing.’ And he said, ‘Oh, it’s fake Spanish. We were looking for a rhyme to the words ‘San Antonio.’ But since you’re in the studio, why don’t you take a stab at re-recording a version?’ And I said, ‘We will do just that.’ He said, ‘And while you’re at it. You’d better make up your own second verse!’