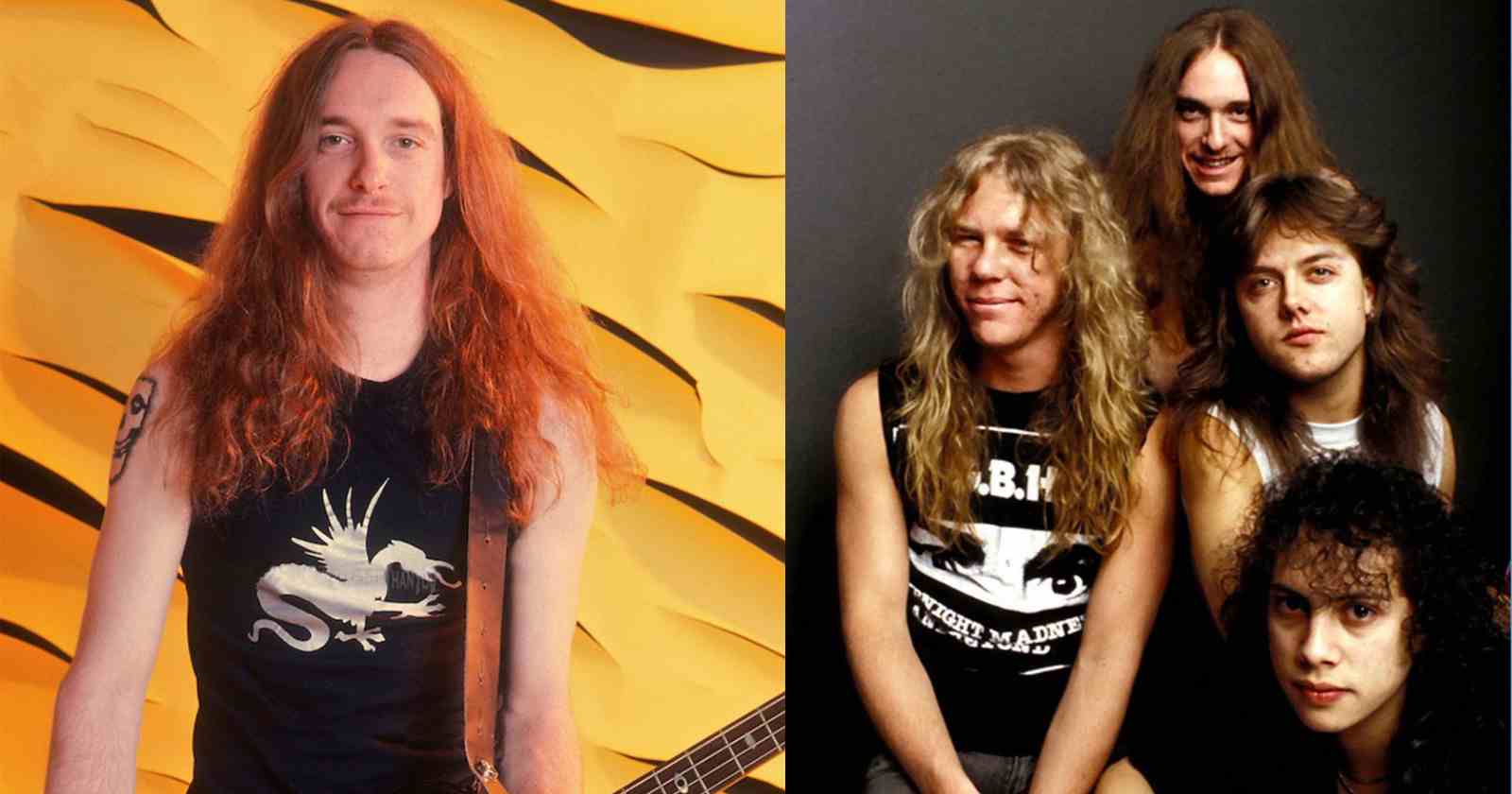 The late Metallica bassist Cliff Burton still is an influence to a whole generation of Heavy Metal bass players but he had a wide taste in Rock music as he revealed in an interview Thrash Metal magazine back in 1986, the same year he tragically died in a bus accident when touring.

He was posthumous inducted into the Rock and Roll Hall Of Fame as a member of Metallica in 2009 and his father Ray Burton (Dead in 2020) was present to receive the honor.

The interviewer Harald O. asked Cliff Burton to list his 5 favorite albums, but he suggested to list his 5 favorite bands, saying: “Uhhh… top five albums… Well, let’s just say top five bands. Everything by Glen Danzig, which is The Misfits or Samhain, all of his shit. All of Thin Lizzy’s stuff. What else? Jesus, what else….? Awww, shit!”

The interviewer than suggests: “English Dogs? Creedence?” and Cliff answers saying: “Nah, nah. The old Black Sabbath stuff…. What else? There’s a band called R.E.M. that I like a lot, strangely enough. There’s also…. a lot of the old Aerosmith, the new Aerosmith shit, too. I like Aerosmith a lot.”

Cliff Burton liked The Misfits so much that he even had a tattoo of their mascot, the Crimson Ghost in his right arm. In an interview with Kerrang! in 2021, The Misfits classic vocalist Glenn Danzig talked about Metallica, saying: ​“I knew about Metallica and some other guys in bands (That were Misfits fans) because they’d get in touch with me. Metallica were cool. They blurred the lines between punk and metal, and they were good guys, particularly in the beginning.”

The band was also important for Metallica surviving members that covered The Misfits classic “Die, Die My Darling” on their 1998 covers album Garage Inc.

In a video shared by Cliff Burton’s family back in 2016, his father Ray showed many albums of Cliff’s personal collection and said that: “Thin Lizzy was probably… he had more albums of Thin Lizzy than any of the others.” His father shows in the video that Cliff had probably all Thin Lizzy albums.

Lars Ulrich, Kirk Hammett and James Hetfield also liked Thin Lizzy and they even covered the band’s version of traditional Irish song “Whiskey in The Jar” on their 1998 covers album “Garage Inc.”

Metallica guitarist Kirk Hammett recalled in an interview with Steffan Chirazi in 2022 that the late bassist Cliff Burton got nervous when the legendary bassists Geddy Lee from Rush and Geezer Butler from Black Sabbath went to see Metallica concerts back in the 80s.

Geddy Lee showed up at one of our shows on the ‘Ride The Lightning’ tour. We played Toronto, and all of a sudden we got a message backstage that Geddy Lee was in the audience.” And Cliff Burton just freaked out.”

“He started pacing, he started smoking pot, and he was, like, ‘Oh my God! Geddy! Geddy Lee!’ He could not settle down; he was so nervous and just happy at the same time that Geddy Lee was there. And then Ross tells him that Geezer Butler is out there one night. Same thing — he starts pacing around, super nervous, grabs a beer,” Kirk Hammett said.

Black Sabbath was also an important band for Lars Ulrich and James Hetfield and they even had the chance to induct the British Heavy Metal band into the Rock and Roll Hall of Fame in 2006.

Another band that shows that Cliff had the same taste as Lars and James, because the two honored Aerosmith on MTV Icon back in 2002 and they shared their love for the Hard Rock band from Boston (Transcribed by Rock and Roll Garage). “There were plenty of posters on my wall and the one that really meant a lot to me was the one of Steven and Joe up there singing into the same microphone.”

“My mom, God rest her soul, she was an artist and she projected my image onto the wall and painted me as Steven and as Joe, in a silhouette, it was so cool, it was in my room. I just couldn’t decide which was cooler, so I decided to sing and play guitar.”

Metallica had the chance to be Aerosmith’s opening act in 1990, ufortunately 4 years after Burton’s death.

Formed in Athens, Georgia, United States back in 1980 by drummer Bill Berry, guitarist Peter Buck, bassist Mike Mills and vocalist Michael Stipe, R.E.M became one of the best-selling bands in the 90s. Over their career they sold more than 85 million records worldwide and some of their classic songs are: “Radio Free Europe”, “Stand”, “Everybody Hurts”, “Losing My Religion” and “Is The End Of The World as We Know It”.