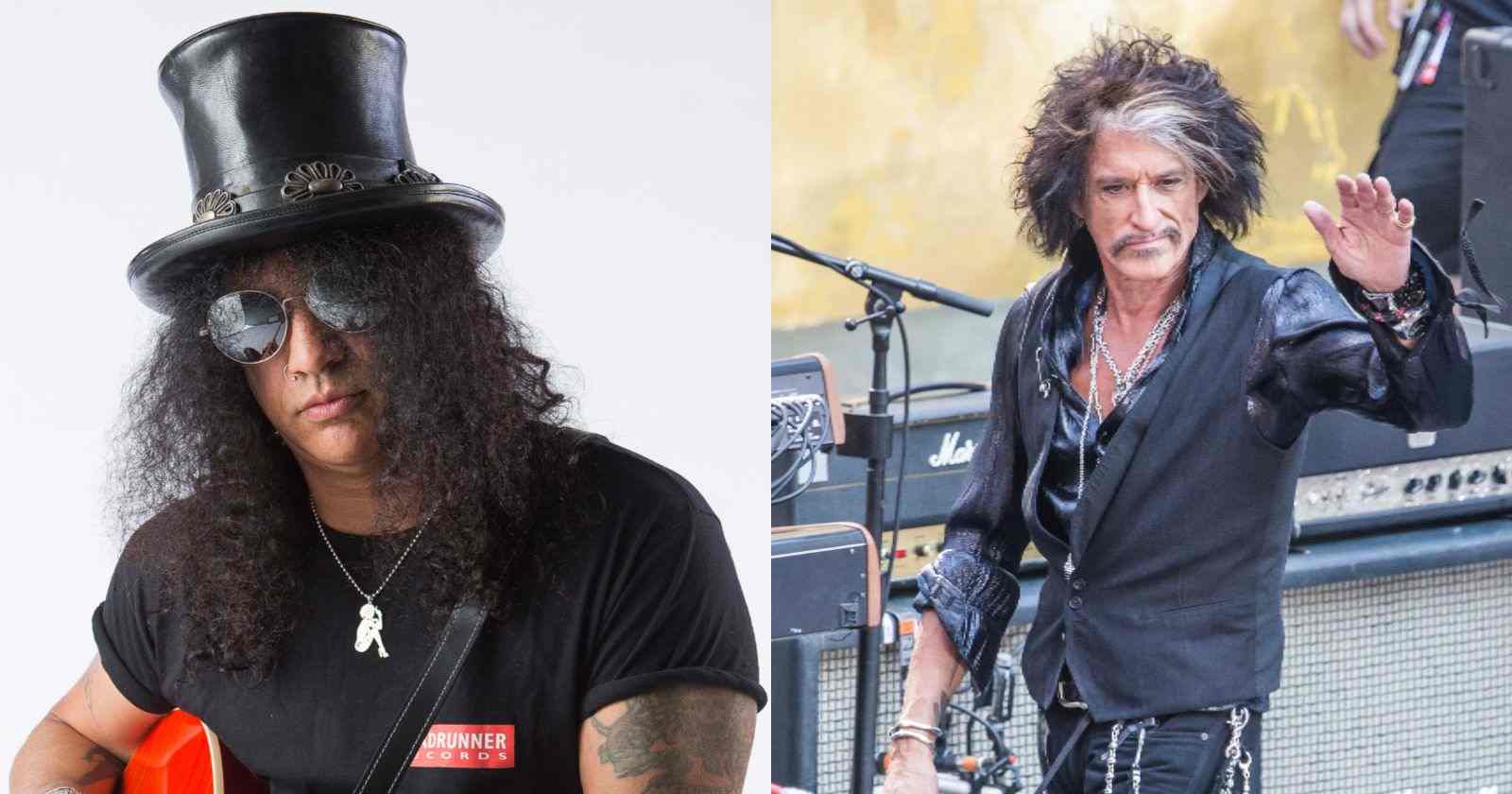 Aerosmith and Guns N’ Roses are bands known for their amazing guitarists Joe Perry and Slash. In an interview with Guitar.com back in 2019 Slash gave his opinion on Perry and talked about the musician’s style.

“He was a huge influence on me. In fact, it was Aerosmith that inspired me to start playing guitar in the first place… Hell, they even distracted me from the hottest chick in my junior high! I’d finally gotten over at her place after chasing her for months and she put Rocks on. It was the first time I’d ever heard it and I totally forgot about her. I ignored her completely and just kept playing the album over and over. She eventually walked out of the room and I split. that’s how much of an impact Aerosmith had on me.”

“He’s a great riff writer and has a wonderful head for catchy licks that are always different to what anybody else would do. Joe also comes from that school of ‘beat the shit out of your guitar’. The only two guys who have ever put out a record that has that kind of fuckin’ cruelty to an instrument are Joe Perry and Pete Townshend – they both have a real sense of aggro that I really dig. They’re both really great players who just instinctively know how to throw all the fucking sloppiness in the right places.”

“Granted, Joe’s gotten a little more fine-tuned over the years, but in Aerosmith’s early touring days during the mid 70s, there was a lot of brilliant noise coming out of them and a lot of it was due to his ‘wham bam’ guitar style,” Slash concludes. “Plus, all things considered, Joe’s still the coolest-looking guitar player around! He’s always had the coolest image.”

He reunited Joe Perry with a Prized ’59 Les Paul

Joe Perry was separated from his prized ’59 Les Paul back in 1980 and Slash gave him the guitar back some decades later in his birthday. Perry recalled the story in an interview with Conan O’ Brian back in 2014

“Well, it was — let’s see, 1980 — I just left Aerosmith and was Christmas time and I needed some bread and actually I was playing Stratocasters a lot around then. That was the best guitar to sell, I could get rid of it quick because they are very rare. Like you said, you know the value to them. So anyway I sold it and really didn’t think much of it.”

“There was no eBay or anything like that back then. I called up one of my dealer friends. Anyway, so time went on and over the years the band got back together again and we started — started to have some success again. And I thought maybe it would be a good idea to maybe I could find some of those old guitars that had gone the way of the wind, you know. So I started looking for this one. I had all of my guitar techs out looking everywhere. Brad walks in and said “I know where your guitar is.” He opens up the guitar magazine and the center fold had Slash’s guitar collection and right in the middle was that guitar.”

Conan asked: Slash ended up with your guitar?

“Yeah. Changed hands and ended up in his hands. He’s made no bones about the fact he’s been a fan of the band. And, boy, when I — I called him up and he was like “oh, please don’t ask me, man. Don’t ask me that.”

Did you say I will buy it back?

“I said I will pay you whatever you want for it. It doubled in price by then. And he said, listen, I will think about it. I called him back and over a series of months go by and I’m talking to him. Every — I would ask him and finally he stopped taking my calls. I finally had to sit him down.”

“So I knew it was getting in the way of our friendship. I said I will never ask you about it again, man. If you ever want to sell it back, just give me a call, whatever but I won’t bug you about it. And at my 50th birthday, Cheap Trick was playing. They came in to play. And I sat in with them and in the middle of the set my guitar tech walks up and hands me this guitar. And it was the guitar and Slash gave it to me. His heart is so big, I don’t know how it fits in his chest. He’s amazing.”