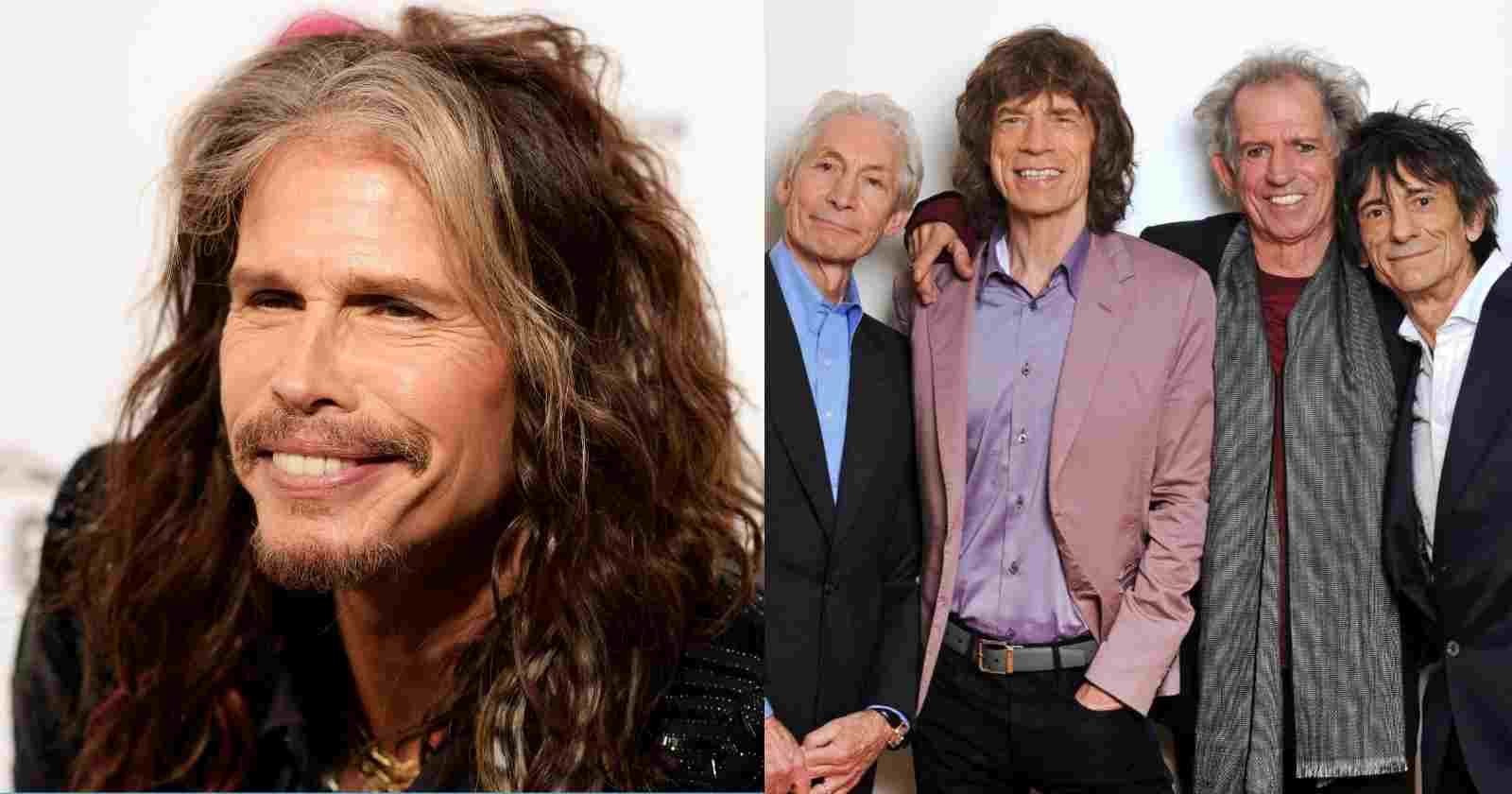 Aerosmith singer Steven Tyler is often compared to Rolling Stones‘ Mick Jagger because of the way he acts on stage. Back in 2011 in an interview Rolling Stone magazine, he created a playlist with his favorite Stones songs.

Rolling Stones recorded “I’m a King Bee” for their 1964 debut album. The band’s arrangement generally follows Slim Harpo’s. But includes a slide-guitar break by Brian Jones. The personnel consisted of Jagger on vocals and harmonica, Jones on slide guitar, Keith Richards on acoustic guitar, Bill Wyman on bass guitar, and Charlie Watts on drums. Later, Mick Jagger commented “What’s the point in listening to us doing ‘I’m a King Bee’ when you can hear Slim Harpo do it?”

“Rip This Joint” is the second song on the Rolling Stones’ classic 1972 album Exile on Main St. Written by Mick Jagger and Keith Richards, “Rip This Joint” is one of the fastest songs in the Stones’ canon, with a pronounced rockabilly feel. Jagger’s breakneck delivery of the song’s lines spells out a rambling tale set across America from the perspective of a foreigner.

“Get Off of My Cloud” was written by Mick Jagger and Keith Richards for a single to follow the successful “(I Can’t Get No) Satisfaction”. It topped the charts in the US, UK, Canada, and Germany and reached number two in several other countries.

“Something Happened to Me Yesterday” is the closing track of The Rolling Stones’ 1967 album Between the Buttons. Written by Mick Jagger and Keith Richards and recorded in August and November 1966, “Something Happened to Me Yesterday” is the first officially released Rolling Stones track to feature Richards on separate lead vocal. Jagger sings the verses; Richards sings the chorus and plays the electric and acoustic guitars; Charlie Watts is on drums and Bill Wyman on bass, Brian Jones whistles and plays trumpet, trombone, and tuba, Jack Nitzsche plays piano, and the Mike Leander Orchestra performs the brass section.

“Hot Stuff”, written by Mick Jagger and Keith Richards, was recorded in March, October and December 1975 during the Black and Blue sessions, and is heavily influenced by the disco/funk sounds of the day, with Charlie Watts laying down a heavy drum pattern accompanied by Ollie E. Brown on percussion. Also Bill Wyman adding a funky bassline, and extensive use of the Wah-wah pedal by guest guitarist Harvey Mandel, formerly of Canned Heat.

Mandel plays the lead guitar parts on the song and was one of the guitarists in consideration for replacing the departed Mick Taylor’s slot as the Stones’ lead guitarist, a position eventually filled by Ron Wood. Billy Preston plays piano on the recording and contributes backing vocals along with Richards and Wood. The video, however, features Wood on guitar playing Mandel’s part.

“Memory Motel” is credited to singer Mick Jagger and guitarist Keith Richards. It’s one of the few which feature both members sharing lead vocals. The song is more than seven minutes long, one of the longest by the Rolling Stones.

Jagger began writing the song before beginning the Stones’ Tour of the Americas ’75 while staying with Richards at Andy Warhol’s house in Montauk, New York and finished it while on tour. This is reflected in the song’s lyrics where Jagger describes having to leave for Baton Rouge. Where the Stones played two warm up shows at Louisiana State University, and where he describes subsequent experiences on the road.

The Spider and the Fly” was recorded in May 1965 and first released on the US version of their 1965 album Out of Our Heads.

“She Said Yeah” was released on the album December’s Children (And Everybody’s) in December 1965. It is the last of the group’s early albums to feature numerous cover songs; writers Mick Jagger and Keith Richards wrote only half of the songs themselves. There had been no sessions to record the album. Many of the tracks had appeared earlier in the UK versions of Rolling Stones albums.

Steven Victor Tallarico (Steven Tyler) was born on March 26, 1948, at the Stuyvesant Polyclinic in Manhattan, New York . Then he moved to the Bronx when he was three years old. The family relocated to 100 Pembrook Drive in Northeast Yonkers in 1957 when he was about nine years old. Tallarico is the son of Susan Ray (June 2, 1925 – July 4, 2008), a secretary, and Victor A. Tallarico (May 14, 1916 – September 10, 2011), a classical musician and pianist who taught music at Cardinal Spellman High School in The Bronx.

Steven Tyler’s father was of Italian and German descent, while his mother was of Ukrainian and English ancestry. He has noted on a number of occasions that his maternal grandfather was Ukrainian, and changed his surname from “Czarnyszewicz” (from Polish: czarny, lit. ’black’) to “Blancha” (possibly from French: blanche, lit. ’white’). His paternal grandfather, Giovanni Tallarico, was from Cotronei, Calabria, Italy. Steven Tyler learned on the genealogy show Who Do You Think You Are? that his great-great-great-grandfather was part African-American. Steven has one older sister named Lynda.