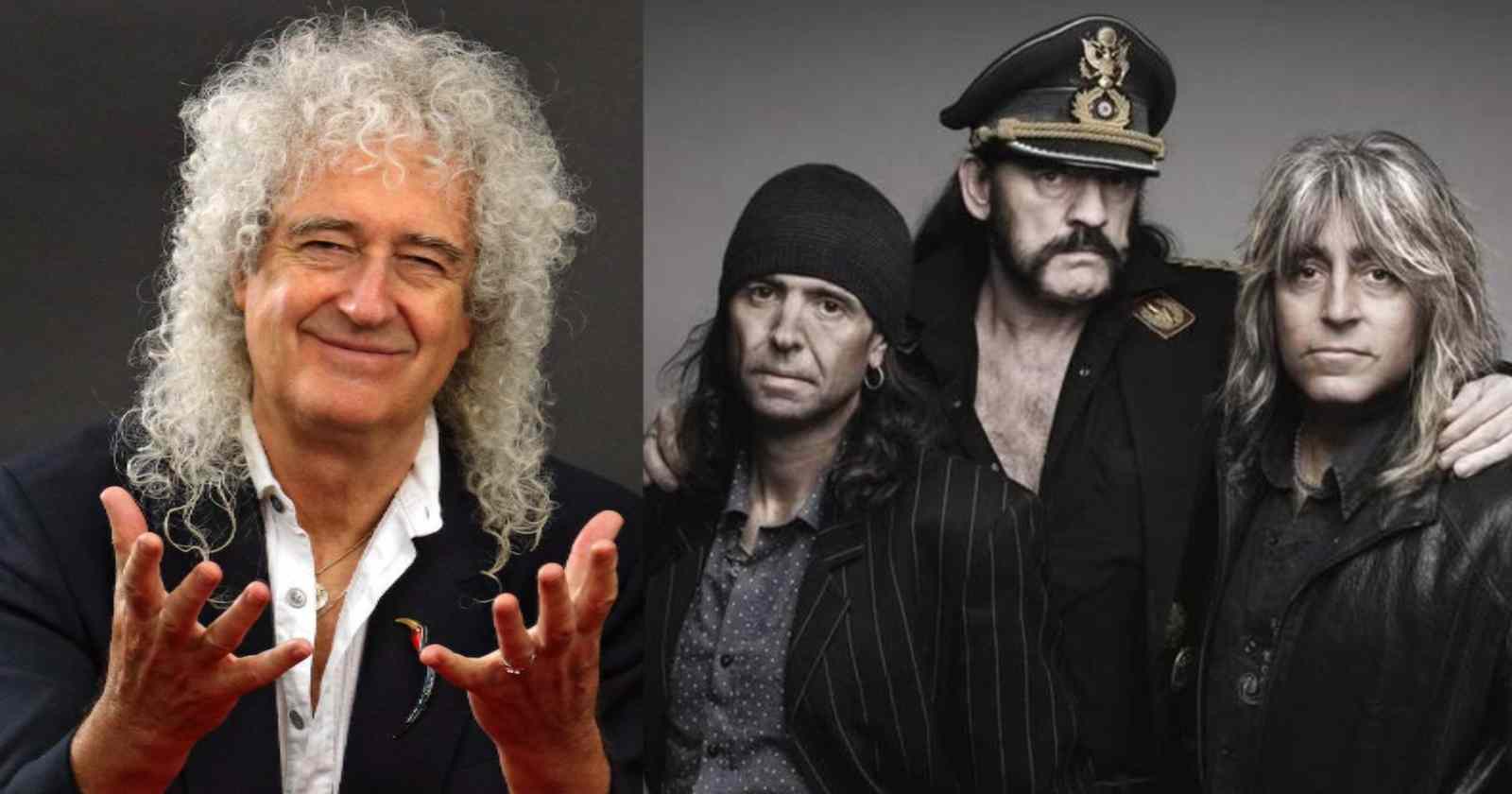 Formed in London, England back in 1975, Motörhead became one of the most influential heavy rock bands in history. Even though they weren’t a huge commercial success, with only 15 million records sold worldwide, much less than some of their peers, the group had a cult-following and was the inspiration for many other bands like Metallica, for example. They were also recalled for the unique personality, bass playing and vocals of the late Lemmy Kilmister, the leader and only original member of the band.

Over the decades many important musicians talked about Motörhead and Lemmy, including the Queen guitarist Brian May.

What is Brian May’s opinion on Lemmy Kilmister and Motörhead

The praised Queen guitarist Brian May loved Lemmy Kilmister and Motörhead, the two musicians knew each other and in 2015 when the bassist died at the age of 70, May posted a touching message in his official website. The guitar player recalled Lemmy’s personality, personal beliefs and the mutual respect they had for each other. Also recalling the unique experience of playing live with Motörhead on stage and the chance he had to play on the band’s final album.

“Words don’t come easy. Especially when you know Lemmy would have laughed at us all trying to say dignified things about him being a hero. Any time I attempted to say anything complimentary to Lemmy to his face, he would fix me with a kind of amused, contemptuous stare.”

“But a kind of hero he certainly was. Unique in just about every way imaginable. He was a living mismatch of personality types. His music was roaring, abrasive, uncompromising. His lyrics mostly deliberately gave no hint of sensitivity. Yet as a person he was a pacifist, a deep thinker. A man who cared profoundly about his friends. I was never in his closest circle of pals. But we bumped into each other often and he always managed to say something shockingly respectful to me, leaving me disarmed, because he hated being praised himself. Or so it seemed.”

“One of my dearest friends lived with Lemmy for 10 years. She always spoke of him as a tender man. Very different from his public face, which never deviated from his tough gaze on the world. Lemmy was a highly cultured and well-read man. Yet to see him glued to a fruit machine most of a night in the Rainbow Bar and Grill on Sunset Strip you would never have guessed it. In fact, that hallowed place, steeped in Rock and Roll history. Will always bear his spiritual mark.”

“We all come into this world as babies, and mould ourselves into what we want to be. Lemmy – as a product of his own will, has to be the original mould of a Hard Rock Icon which defines the term. Lemmy lived his music and his persona within his music 100 per cent to the full. Motörhead has been for most of its history a three-piece outfit. Again leaving no room for frills. And the three pieces (or sometimes four) were always frenetically at max. I remember guesting with them at the Brixton Academy. It was possibly the most ear-splitting experience of my life.”

Brian May played the classic Motörhead track “Overkill” with the band back in 2000 at their 25th anniversary concert at the Brixton Academy in London. He continued recalling the incredible experience of sharing the stage with Lemmy Kilmister and giving his opinion on the musician’s bass playing.

Brian May continued recalling the experience of playing with Lemmy Kilmister and Motörhead:

“Most bands – while the back line is arranged to look mean and powerful, actually keep the on-stage volume to a controlled maximum, the real volume for the audience being supplied by miking everything into a large PA system. Not so Motörhead (with the umlaut on the ‘o’ of course). The giant piles of speaker cabinets behind them were all live and all turned up to 10. ( OK – 11 ! ) The sound of Lemmy’s bass was like being inside a giant pulverising machine, a whole frequency spectrum thing.”

“It wasn’t a conventional bass sound at all. Even if no other instrument was playing for a moment, Lemmy’s bass was deafening you from 50 cycles to 10K. And he was hammering (and I choose my words carefully) round about 200 notes a minute for a lot of the time. It was, and is, unique. And on top of this monumental noise sat his highly distinctive throaty tobacco-soaked growl of a vocal.”

Brian May met Lemmy Kilmister before Motörhead, when the late musician was a member of Hawkwind

In the same statement, Brian May also recalled that he met Lemmy before the musician created Motörhead. Queen played with Hawkwind, the Psychedelic Rock band that Kilmister was a member from 1971 to 1975. Besides the band’s bassist, Lemmy Kilmister also sang in their biggest hit “Silver Machine”.

“It’s hard to recognise Lemmy in his early work as the monster he became. But he was still pretty awesome in the psychedelic Hawkwind, when we (Queen) played with them at Epsom Baths (was it?) around 1970. Then Lemmy left to form his own band with a much tougher style, the antithesis of Flower Power. I don’t remember the first incarnation of the band.”

“But I knew Fast (appropriately nicknamed) Eddie Clarke as Lemmy’s guitarist in the early days, and Philthy Animal as drummer, and the band had enormous primitive manic energy. I remember Wurzel too, a legendary force. But for more years than I can remember subsequently, the outstanding Phil Campbell was Lemmy’s foil on guitar, no less wild and dangerous. But also bringing great technical skills to the mix.”

Brian May played a guitar solo on the last Motörhead album

As the Queen guitarist also recalled on his message about Lemmy, he was invited by Motörhead’s guitarist Phil Campbell to play a guitar solo in the track “The Devil” from the last Motörhead album “Bad Magic” released in 2015, the same year that Lemmy died.

“I could go on. About Lemmy’s skills at embarrassing people (including me). And about his ability to soak up substances in quantities that would have anaesthetised a rhinoceros. But it’s enough. All the most important stuff is in his music.”

“Phil roped me in to play on the most recent Motörhead album. An honour which I will now treasure more than ever. It’s a track called ‘The Devil’. If there’s any justice, Lemmy will be in some celestial rock and roll bar, knocking back Jack Daniels with the Devil at his side. The two of them quietly chuckling at the oddities of life,” Brian May said.

In an interview with Yahoo Music back in 2015, Lemmy gave his opinion on May’s contribution to the Motörhead track, saying: “I knew he’d nail it. Brian’s a nailer, all right. I thought he got a bit samey at the end of Queen. He’s said that himself. But it was great to have him on the album.”