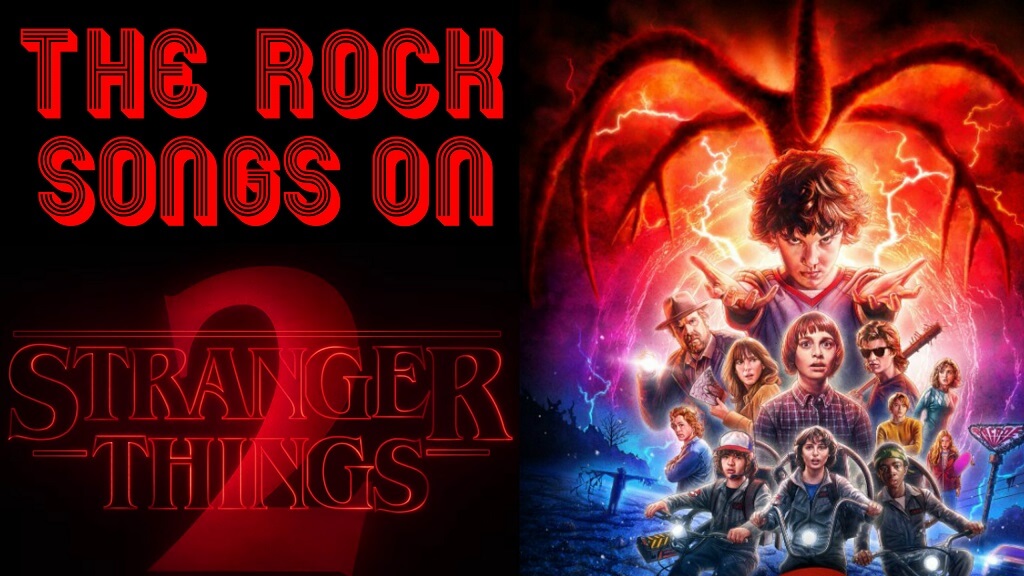 Netflix’s smash hit show “Stranger Things” is already one of the best things that happened in the pop culture in the last years and is definitely on the history of TV/Stream, whatever you wanna call these services that gives movies and series on demand.

One of the reasons for the success of The Duffer Brothers show, is the 80’s atmosphere, that brings nostalgia and “awesomeness”. And you wouldn’t be able to do that without music, 80’s music!

So we prepared a list that shows all the great rock and roll songs that are this new “tottally tubular!” Stranger Things season.

“The Ghost In You” by Psychedelic Furs

“The Ghost in You” is a song by the English rock band The Psychedelic Furs, written by the band’s lead singer Richard Butler and bass player Tim Butler. It was the second single from the band’s fourth studio album, Mirror Moves (1984). As a single it peaked at number 59 on the US Billboard Hot 100 and number 68 on the UK Singles Chart.[citation needed] British filmmaker Tim Pope directed the song’s official music video.

A few other soundtracks featured this minor hit from The Psychedelic Furs… by other artists. Counting Crows recorded it for the ’90s teen comedy Clueless and Sugar Ray’s Mark McGrath covered it for the Adam Sandler/Drew Barrymore romantic comedy 50 First Dates. On the small screen, Matthew Puckett’s cover was used in an episode of the SyFy channel reboot of Being Human (season one’s “Some Thing to Watch Over Me”).

“Every Breath You Take” by  The Police

This song is one of the most misinterpreted songs ever. It is about an obsessive stalker, but it sounds like a love song. Some people even used it as their wedding song. The Police frontman Sting wrote it after separating from his first wife, Frances Tomelty.

In a 1983 interview with the New Musical Express, Sting explained: “I think it’s a nasty little song, really rather evil. It’s about jealousy and surveillance and ownership.” Regarding the common misinterpretation of the song, he added: “I think the ambiguity is intrinsic in the song however you treat it because the words are so sadistic.

On one level, it’s a nice long song with the classic relative minor chords, and underneath there’s this distasteful character talking about watching every move. I enjoy that ambiguity. I watched Andy Gibb singing it with some girl on TV a couple of weeks ago, very loving, and totally misinterpreting it. (Laughter) I could still hear the words, which aren’t about love at all. I pissed myself laughing.”

This Toto hit tells the story of a man who comes to Africa and must make a decision about the girl who comes to see him. He is enamored with the country, but must leave if he is going to be with her.

Toto keyboard player David Paich wrote the song, and explained in the liner notes of Toto’s Best Ballads compilation: “At the beginning of the ’80s I watched a late night documentary on TV about all the terrible death and suffering of the people in Africa. It both moved and appalled me and the pictures just wouldn’t leave my head. I tried to imagine how I’d feel about if I was there and what I’d do.” Paich had never been to Africa when he wrote the song.

In an article in Time magazine, one of the group members said they were looking for a song just to close off the album and did not think “Africa” would do as well as it did. They also mentioned that if you listen close enough during the lyrics “catch some waves,” some group members were singing “catch some rays.”

“Should I Stay Or Should I Go” by The Clash

One of the more popular songs by The Clash uses a very unusual technique: Spanish lyrics echoing the English words. Singing the Spanish parts with Joe Strummer was Joe Ely, a Texas singer whose 1978 album Honky Tonk Masquerade got the attention of The Clash when they heard it in England.

When Ely and his band performed in London, The Clash went to a show and took them around town after the performance. They became good friends, and when The Clash came to Texas in 1979, they played some shows together. They stayed in touch, and when The Clash returned to America in 1982, they played more shows together and Ely joined them in the studio when they were recording Combat Rock at Electric Ladyland Studio in New York.

“Hazy Shade Of Winter” by The Bangles

The song was written by Paul Simon, originally recorded by Simon & Garfunkel for their 1966 album Bookends, and released as a single with “For Emily, Whenever I May Find Her.” It made #13 on the Billboard Hot 100. The Bangles cover did much better, being one of the few cases where a cover of a Simon & Garfunkel song did better than the original.

As Bangles’ singles go, this one was only beaten for chart performance by “Manic Monday” and “Eternal Flame.” If you check out the Simon & Garfunkel version, the Bangles really improved on the song, as if it should have been written for them all along.

The Bangles recorded the cover for the soundtrack to the 1987 movie Less Than Zero, a film about rich Los Angeles yuppies struggling with drugs. It does make a connection with that culture: the Bangles are from Los Angeles and were generally a hit with Southern Californians from the first album.

“I Melt With You” by Modern English

The song sounds like an upbeat love song, but it’s more apocalyptic than you might expect. With lyrics about “the world crashing all around your face” and “a pilgrimage to save this human’s race,” it really does take place with the world about to end, and the melting is quite literal.

Modern English lead singer Robbie Grey, who wrote the song with his four bandmates, explained: “I don’t think many people realized it was about a couple making love as the bomb dropped. As they made love, they become one and melt together.”

While the song was never a big chart success, it has stood the test of time and is considered a New Wave classic. The song gained some traction when MTV gave the video plenty of airplay. It was also featured in the 1983 movie Valley Girl.

Foreigner has always stayed away from any “message songs,” so you won’t get political or social commentary from them, but you will get songs dealing with relationships and emotions. Foreigner guitarist Mick Jones, who wrote the song with lead singer Lou Gramm, told SongFacts:

“There’s a song called ‘Waiting For A Girl Like You,’ which I literally had no control over, it just came out. I had no idea what it meant, but it got to the point where I couldn’t even be in the studio when we were recording it sometimes, it left such a deep impression on me. But it ended up being a song that brought a lot of people together.

“I hear these days that it’s a song that a lot of people play at their weddings. It’s the kind of song that the pen does the writing, and you don’t even know where it came from. But I feel that it’s stuff that’s floating around at times and you have to grasp it – it’s kind of flying around in the air, and you just have to be open enough to let that flow through you.”

“Sometimes it’s sort of mystical where these ideas come from. Sometimes you have an idea about a song, or you have a title that you base the rest of the song on, but sometimes it comes just literally from an unknown area. You’ll be thinking about something completely different, and suddenly you get that inspiration. I usually know when it’s happening, and I just let it flow and try not to interfere with it – just try and deliver what that thought, those feelings, mean.”

In interview to Songfacts, Scorpions guitarist Rudolf Schenker talked about the song:

“I think ‘Rock You Like A Hurricane’ is a perfect Rock anthem, which talks about attitude and sexuality. It’s very important to recognize the tension between the verses and the chorus. I think Klaus (Meine) went over the lyrics around 8 or 9 times because the first lyrics of the song went something like ‘blah blah blah blah.’

“And we said, ‘No! The song is not feeling right.’ But at the 9th or 10th time, it came. The lyric goes: ‘The bitch is hungry, she needs to tell, so give her inches and feed her well.’ This was the tension between the ‘Rock You Like A Hurricane’ chorus, and the words to the verses.”

“This is what makes the song great. And the funny thing is, the girls, when they’re talking about ‘Rock You Like A Hurricane,’ they say, ‘Oh, I love your song ‘Rock Me Like A Hurricane.”

This song is definitely one of the most famous theme song’s from all time. It was made for the movie starring Bill Murray, Dan Aykroyd, Harold Ramis, Ernie Hudson and Sigourney Weaver. The film’s director Ivan Reitman insisted that the title of the film be in the song, which made Ray Parker Jr. leery of the assignment. Once he started working on it, Parker wrote it in just a few days.

Parker had to get pretty creative with this, as writing a song with the word “Ghostbusters” in it is quite challenging. In an interview with George Cole, author of The Last Miles: The Music of Miles Davis, 1980-1991,

Parker said: “It sounds easy now because you’ve heard the song. But if somebody told you to write a song with the word ‘Ghostbusters’ in it, it’s pretty difficult. That was the hard part – getting the title in the song.”

Not recorded in the 80’s, but from the 80’s. Peter Gabriel’s version for David Bowie’s huge hit, is taken from

“Scratch My Back” the eighth studio album (and fifteenth album overall) by Peter Gabriel, his first in eight years. It was released in February 2010.

The album, recorded at Air Lyndhurst and Real World Studios during 2009, consists of cover versions of twelve songs by various artists, using only orchestra and voice. It is produced by Gabriel himself with Bob Ezrin.

According to Gabriel, although he and arranger John Metcalfe had talked about Arvo Pärt and Steve Reich as inspiration, it was the work that Metcalfe did on “Heroes” that “gave us the confidence to be bold in the way in which we were going to approach the record.

“Heroes” became the opening track because “without any of the drive of guitar and drums…it builds an enormous tension that bursts open.”