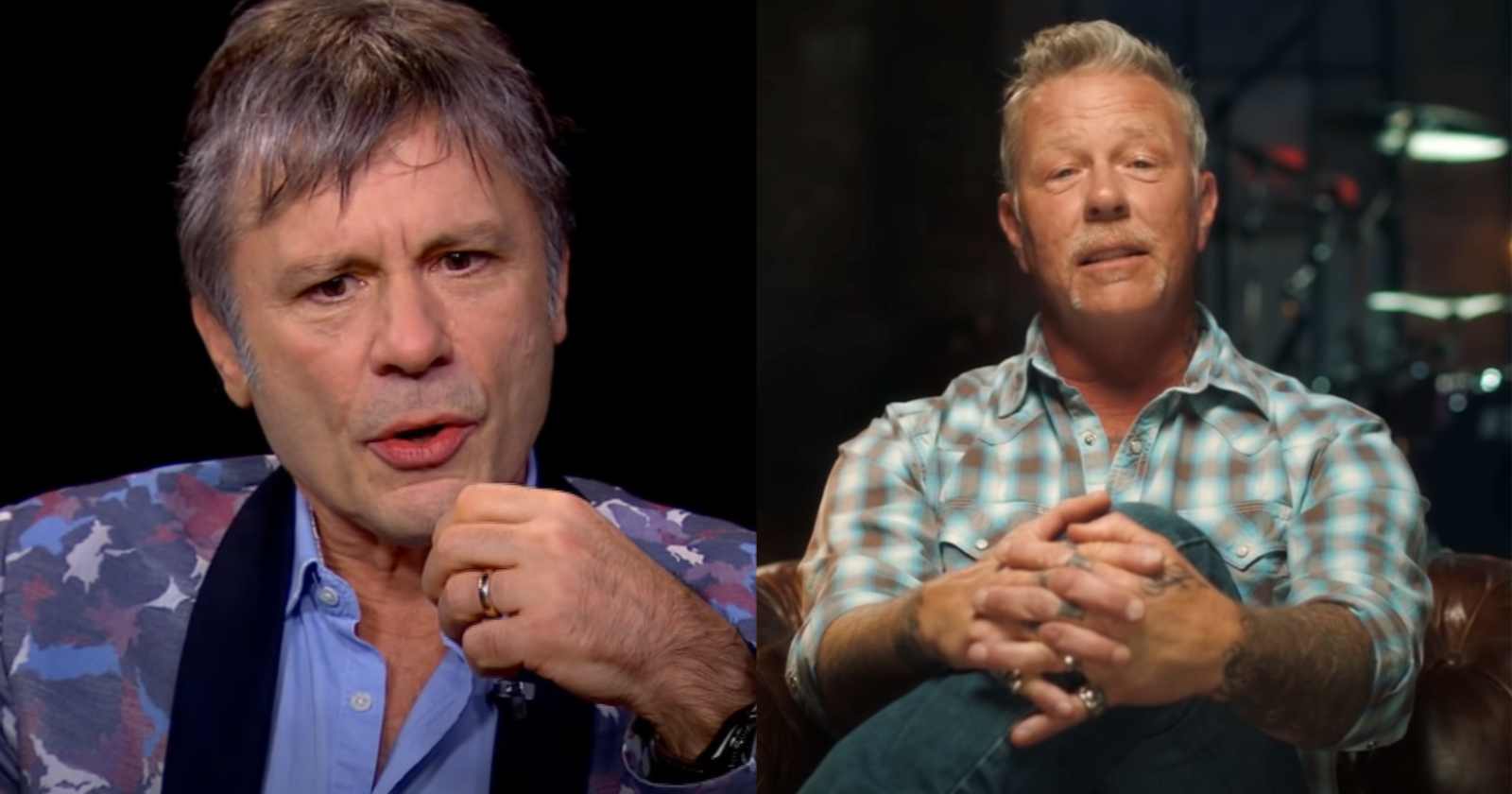 Images from Charlie Rose and Masterclass

Formed in 1981, Metallica changed the sound of Heavy Metal music helping to shape what Thrash Metal would later become, alongside bands like Megadeth, Slayer and Anthrax. All these groups were heavily influenced by the so called ‘New Wave Of The British Heavy Metal’, that gave Metal music more speed. One of the most famous bands of the movement was Iron Maiden, an important influence to Metallica members when they were starting.

Back in 2008, during the BBC radio program Friday Rock Show (Transcribed by Rock and Roll Garage), that was presented by Iron Maiden vocalist Bruce Dickinson, the Metallica drummer Lars Ulrich had the chance to hear the British musician praise one of the songs from the band, saying it was a “great track”.

Bruce Dickinson interviewed on his Friday Rock Show in 2008 all the Metallica members that at the time were promoting the album “Death Magnetic”. When talking with drummer Lars Ulrich, Dickinson said the album was great and named one song as his favorite: “This is actually a great record. But I do think that management needs their head examined for their choice of first track. ‘Cyanide’, man. That track, that has got legs on it and balls on it and everything else. That’s a great track!” Bruce Dickinson said.

The sixth track of Metallica’s ninth studio album “Death Magnetic”, “Cyanide” was also released as a single at the time. In an interview with VGTV in 2008 (Transcribed by Rock and Roll Garage), Metallica’s vocalist and guitarist James Hetfield praised the track, saying: “I really enjoy playing that song live. I think that’s gonna be one of the songs that stays in the live set for a long time.”

James was right, the track kept being included on their concert setlists ever since it was released. Right before performing the song in Belo Horizonte, Brazil in 2022, James Hetfield praised the track, saying: “Now, you’re gonna really like this song, ok? Enough with these other stuff. This is a good song, believe me!”.

“Death Magnetic” was the only album of the band produced by the legendary Rick Rubin, who worked with many other famous artists like Black Sabbath, Johnny Cash, Slayer, Danzig and The Cult. It was the first Metallica album since “And… Justice For All” that wasn’t produced by Bob Rock. Also became the first record to feature bassist Robert Trujillo.

In 2021, on their 30th anniversary of Metallica’s best-selling album “Metallica”, also known as “The Black Album” because of the cover, the Iron Maiden vocalist gave his opinion on the record when talking with Classic Rock magazine. He said that bands like Maiden, Judas Priest and Pantera came to a point where they had the chance to “step up to the next level” but none of them had the courage to do it. However, for Dickinson, Metallica had that courage. “You have to give them huge credit for grabbing the opportunity when it came up. (Also) taking the risk and deservedly reaping the enormous rewards. You cannot underestimate their achievement with this album.”

“It’s one of those seminal albums that just gets it right. It’s extremely well-produced. Every note on that album is totally under control. I admire how they did it, and what they did with the songs. It was very effective.” Dickinson continued saying that “undoubtedly” helped to push the band into the mainstream. He also said that producer Bob Rock made an amazing job, being “very much in control”. Something that he compared to what Mutt Lange does, who is another famous producer. “Did help push metal into the mainstream. I know it wasn’t Mutt Lange who produced it. But Bob Rock had that similar thing where the producer was very much in control.”

The singer also said that Maiden could never do an album like that because they are not very “under control” and they don’t want to be. The album debuted at number one in ten countries. Also spent four consecutive weeks at the top of the Billboard 200.

Metallica was inducted into the Rock and Roll Hall Of Fame back in 2009. Iron Maiden still wasn’t.