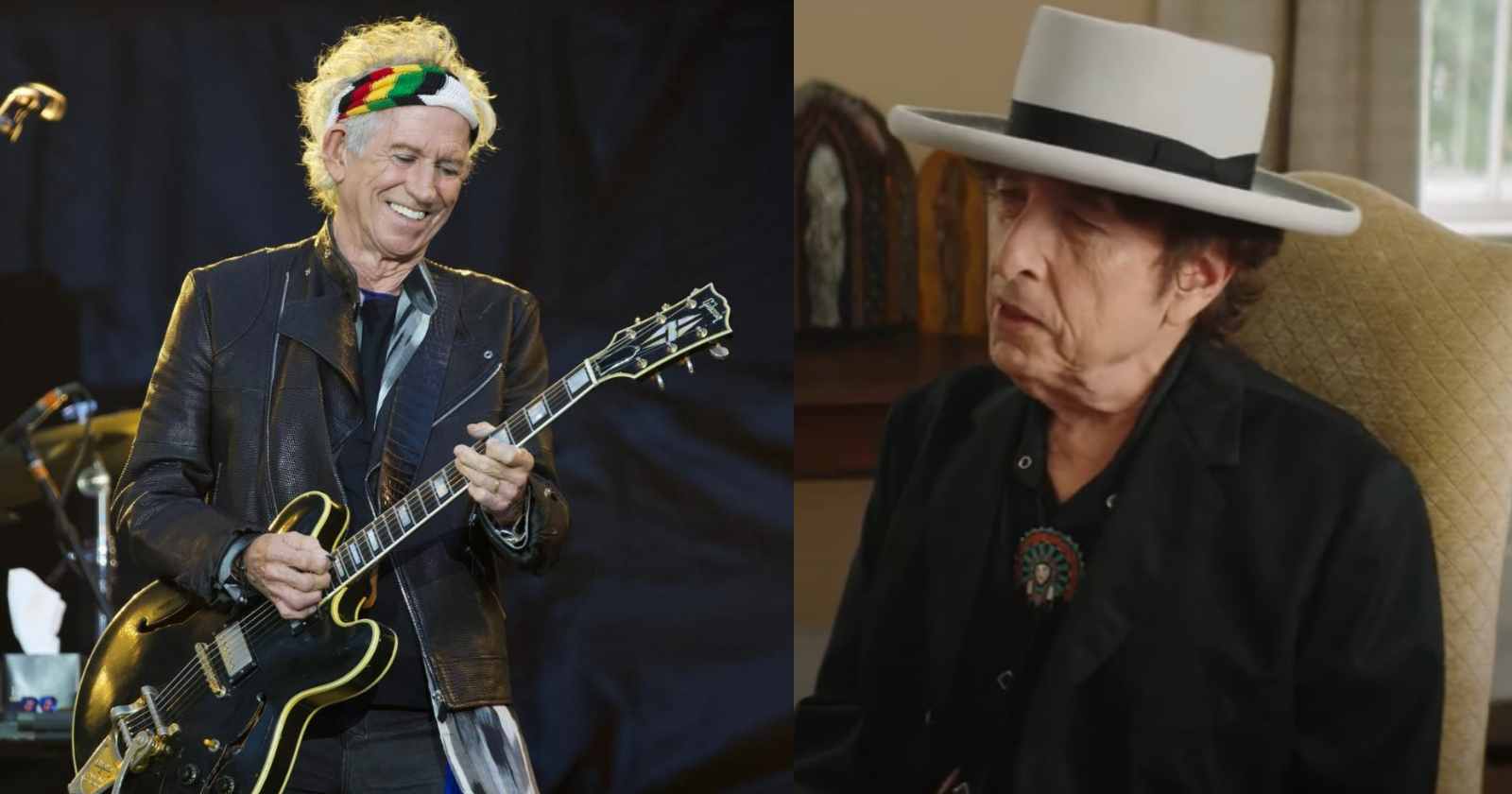 Bob Dylan is one of the most influential artists in the history of music and his records were extremely important to many of his peers, including The Rolling Stones. Over the years many members of the British Rock group talked about the American musician and the guitarist Keith Richards even revealed which is one of his favorite songs of Dylan and explained why it is such an important track for him.

Talking with Rolling Stone back in 2011, Keith Richards revealed that one of his favorite Bob Dylan song of all time was “Girl From The North Country”, that was featured on “The Freewheelin’ Bob Dylan”, the 1963 studio album of the American singer. “While the British Invasion was going on, Bob Dylan was the man who really pulled the American point of view back into focus. At the same time, he had been drawing on Anglo-Celtic folk songs, and that’s certainly true of  ‘Girl From the North Country.’”

“It’s got all the elements of beautiful folk writing without being pretentious. In the lyrics and the melody, there is an absence of Bob’s later cutting edge. There’s none of that resentment. It’s very hard to write songs like that. He recorded it again later with Johnny Cash, but I just don’t think it’s a duo song. I think Bob got it right the first time. In a way, I see ‘Girl From the North Country, ‘Boots of Spanish Leather’ and ‘To Ramona’ as a trilogy.”

“Is Ramona the girl from the north country? Is she the same chick who sends the boots of Spanish leather? There’s some connection between them. Also, the guitar picking is almost the same lick in ‘Boots of Spanish Leather’ and ‘Girl From the North Country.’ It’s like an extension of the same song. Before he went electric and submitted himself to that relentless discipline of a rhythm section, there was a beautiful flow in Bob’s songs that you can only get with just a voice and a guitar.”

“He can float across the bar here and there. He’s not restricted by anything; it’s a beautiful form of expression. You let certain notes hang longer, and it doesn’t matter because it all goes with the song. He’s the most prolific writer: I think he’s written more songs than I’ve had hot dinners. So, Bob, just keep ’em coming! He’s an inspiration, really, to us all, beyond even the songwriting, because he’s always trying to go somewhere new. I love the man ”“ and I love that he rock & rolls, too!” Keith Richards said.

Over the years Keith Richards and Bob Dylan shared the stage many times, performing covers and Dylan songs like “Blowin’ On The Wind” and “Like A Rolling Stone“, the latter one that was successfully covered by The Rolling Stones in the 90s. Richards told Rolling Stone in 2016 that he loves Bob Dylan and he would work with him in “Hell or Heaven”

Bob Dylan and The Rolling Stones have a great relationship but once back in the 90s when both shared the stage and were performing “Like A Rolling Stone” things got ugly as The Black Crowes‘ vocalist Chris Robinson recalled in an interview with Howard Stern back in 2019 (Transcribed by Rock and Roll Garage).

“That was in Montpellier, South of France. It was Black Crowes, Bob Dylan and The Rolling Stones. It was the best week. I will always remember because I’ve met Bob that day and he is ultimately my biggest hero. So we were backstage, I mean, behind Keith’s amps and the Stones, ‘Like a Rolling Stone’ was their single in Europe for that tour, when they were on that ‘Voodoo Lounge’ cycle.”

“And they’re gonna have Bob sit in and I’m like ‘Oh my god’. So Mick Jagger is wearing like a long blue satin shirt with a belt, pirate style over it and I just remember things. I don’t know my social security number but I know that. So they’re like ‘Ladies and gentleman, Montpellier”, you know. There’s 60.000, 70.000 people out there. (And they say) ‘Bob Dylan!’. Bob comes walking right beside me and Rich. He is wearing the exact same outfit and I was like ‘That’s fucking amazing’. He walks out on stage and you know, The Rolling Stones are The Rolling Stones, the greatest Rock and Roll band of all time.”

“They’re playing a Bob Dylan song and Bob is there. The Stones don’t jam, they don’t deviate. So it’s like (Chris imitates Mick Jagger singing ‘Like a Rolling Stone’) and then they go around the chorus and then they come up to Bob’s turn. So the band brings the (imitates the song’s rhythm) and Bob goes to the mic and doesn’t sing it. And you see them looking around and they’re like ‘Okay’, it’s kind like you’ve missed the turn at a roundabout and you got to go all the way around.”

“So they go all the way around again and ‘One, two, three’ and he just leans into the mic, turns away. I’m like ‘Oh my god, what the fuck’. It goes on for antoher half a verse. And then Mick’s gonna come over and save the day and then Bob finally goes to and start singing something.”

“They don’t finish and they’re walking off stage and we were standing there. (Bob) walks off before the end of the song and they are like ‘Bob Dylan!’. He turns around and he looks at them (shows his middle finger) saying ‘Fuck you!’ and his give them the finger. And I’m like ‘The best fucking concert I’ve ever seen in my life, it’s incredible’. I can see Keith, he goes ‘Don’t be like that, Bob!’”

Bob Dylan was inducted into the Rock and Roll Hall Of Fame back in 1988 by Bruce Springsteen. One year later, The Rolling Stones were inducted by The Who’s Pete Townshend.