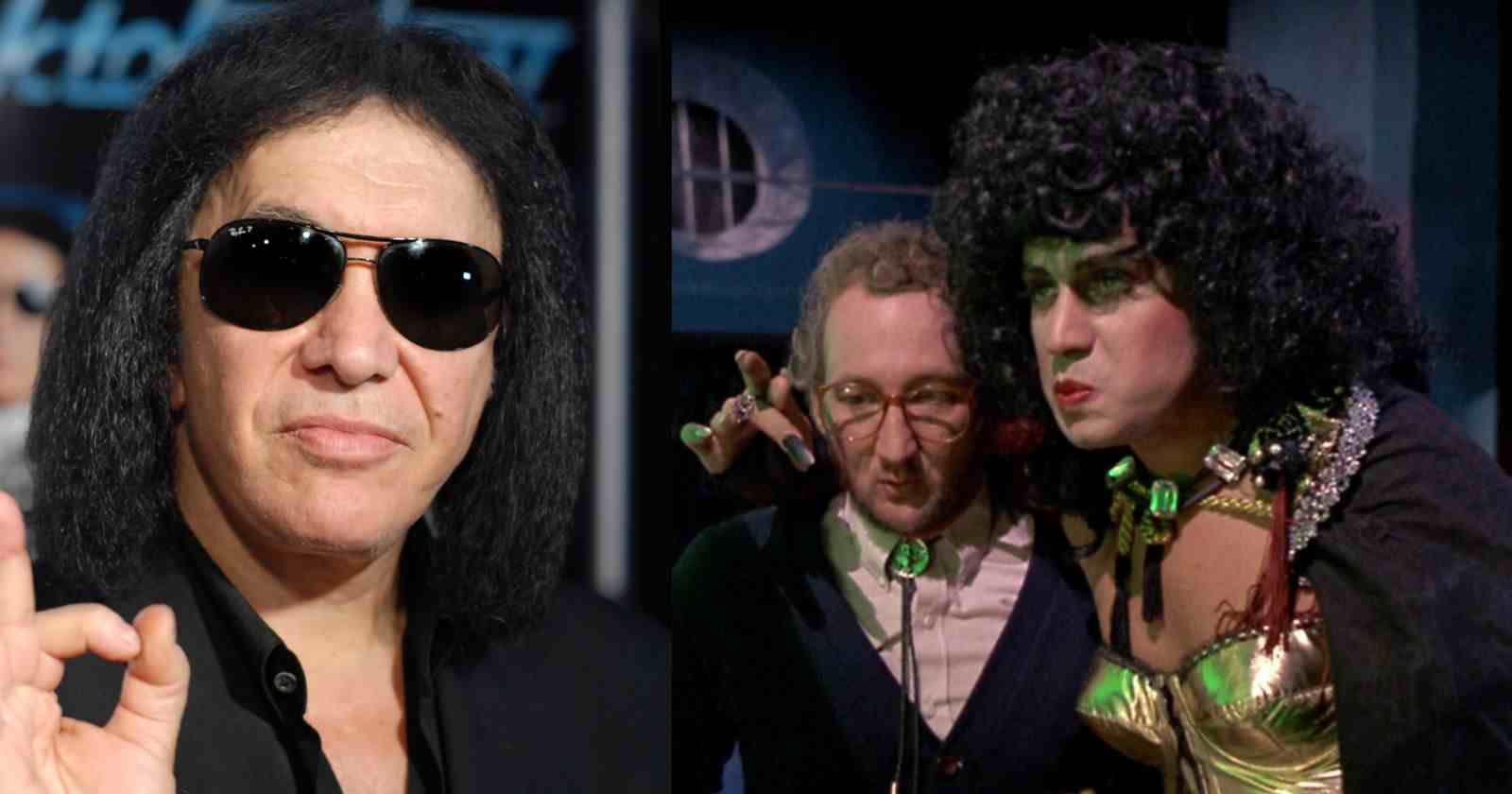 Besides being a successful musician with Kiss, bassist and singer Gene Simmons also started his acting career during the 80’s being a villain in many movies. His first role in a movie that was not related to the band was in Runaway in 1984.

Selleck portrays a police officer assigned to track down dangerous robots. While Simmons is a scientist who hopes to profit from his manipulation of robots.

Never Too Young to Die is a 1986 American action-adventure comedy film directed by Gil Bettman. It stars John Stamos as Lance Stargrove, a young man who, with the help of secret agent Danja Deering (played by singer Vanity) must avenge the death of his secret-agent father (George Lazenby) at the hands of evil hermaphrodite Velvet Von Ragnar (Gene Simmons).

Brian Salisbury of Film School Rejects called Stamos’s performance “quite flat and dull. He seems as if he rolled out of bed and directly onto set without having read a single page of the script.” He criticized the film’s depiction of the punk subculture as inaccurate, but called it “the kind of film that could only exist in the 80s”. He also noted “Gene Simmons’ insane-but-somehow-captivating-in-a-way-that-will-cost-my-therapist-thousands-of-hours-of-his-life performance”.

In an interview with Hollywood Reporter back in 2015, Gene Simmons talked about his role:

“I had to shave and wax my chest, wear a prosthetic set of boobs and all sorts of other indignities — respectfully, to those that enjoy that sort of thing. Whistles and catcalls from the Teamsters” whenever he emerged from his trailer.

Actor John Stamos also commented about Gene Simmons: “It was scary. I guess it was supposed to be like a Rocky Horror ‘Sweet Transvestite’ thing. I think I had nightmares about it, because it was Gene’s big face with all that makeup and stuff. It was a trip.”

Trick or Treat (also known as Ragman and Death at 33 RPM in foreign markets) is a 1986 American horror film by De Laurentiis Entertainment Group, starring Marc Price and Tony Fields, with special appearances by Gene Simmons and Ozzy Osbourne. The movie centers around a teenager who is haunted by the ghost of his rock hero. It is the directorial debut of actor Charles Martin Smith, who has a cameo in the film.

Blackie Lawless of W.A.S.P. originally was set to play Sammi Curr. Ozzy Osbourne plays a televangelist decrying the evils of heavy metal music. Gene Simmons originally was offered the role of Sammi Curr. However, he did not think much of the script and ultimately agreed only to a cameo as radio DJ Nuke. He later said in an interview that he chose to play the role as Wolfman Jack, a childhood hero of his.

The action film was directed by Gary Sherman and had Rutger Hauer as Nick Randall.

Hauer is a Los Angeles-based bounty hunter and ex-CIA operative who is asked by a former co-worker to help track down terrorist Malak Al Rahim (Gene Simmons), who bombed a movie theatre and later planned to release gas from a chemical plant similar in Los Angeles.

The movie shows Remar and Attila are a couple of surfers who also deal drugs to make a living. They are trying to set up a final deal with local drug lord, Calavera, when their friend True Blue is busted by the cops. Blue talks too much in the police station and Calavera is out for revenge because of the betrayal.