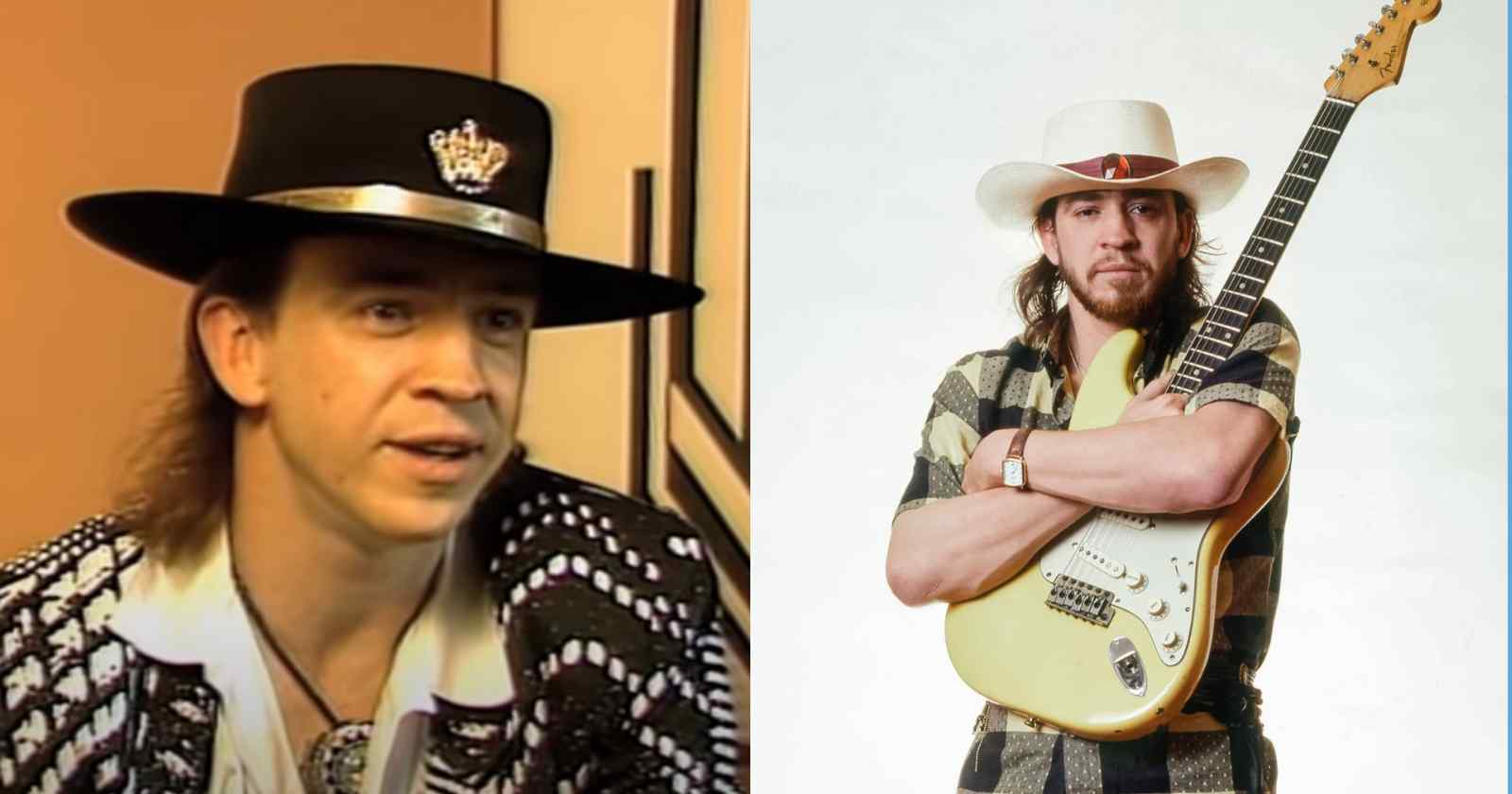 Stevie Ray Vaughan was one of the most influential Blues guitarists in history that helped the music genre to be revived in the 80s. His career was sadly cut short when he died at age of 35 back in 1990 in a tragic helicopter crash. However, his legacy lives on and over the decades he was praised by many of his peers. Rock and Roll Garage selected the 5 legendary guitarists who love Stevie Ray Vaughan’s playing and talked about the musician.

Queen guitarist Brian May is a big fan of Stevie Ray Vaughan’s playing and he even praised the musician paying tribute to him posting on his Instagram page back in 2019 a small clip of the Blues guitarist playing a guitar solo and said: “Ow ow ow !!! Listen to those wonderful juicy notes !! This is a man to stan ! This is the kind of guitar playing that melts me. Stevie Ray Vaughan, lost in a world of his own. He allows his fingers to be a channel for the burning passions inside him.”

“Like Jimi Hendrix, he effortlessly makes his guitar sing to us, speak to us of wonders beyond words. Even with both hands behind his back !!!! I so wish I had met SRV. But one of the favourite moments in my life was when one of his friends told me, after he was gone, that he liked my playing. But this man was truly one of guitar playing’s greatest champions. An elemental monster. Check him out, all ye who would bend strings !!!” Brian May said.

One of the most successful guitarists of all time, Brian May build his own guitar with the help of his father when he was young calling the instrument the “Red Special”. He achieved fame as a member of Queen and helped the band to become one of the best-selling of all time with an estimated amount of 170 million to 300 million records sold worldwide.

The Aerosmith guitarist Joe Perry is also a fan of Vaughan and talking with The Austin Chronicle back in 2004 he listed some of his favorite guitarists from Texas. Stevie Ray Vaughan, who was born in Dallas was one of them: “Stevie was one of the few that really captured it for me. A lot of people can imitate the blues. But very few lived it. And it came out in his playing. I’m still stunned that Stevie Ray Vaughan isn’t with us. I remember when I heard the news. I was in Barcelona, and it was just devastating. Really devastating,” Joe Perry said.

In a conversation with Music Radar back in 2004, Perry was asked if working from a ‘limited palette’ made him a better guitarist and he gave SRV as an example: “It’s tough to work in such a finite space and do something new and interesting. I guess that’s why there aren’t too many fresh new blues songs. But you can’t be afraid to try it. I think Stevie Ray Vaughan was one of the best guitarists to get something new out that space. He knew his chops, obviously, and he’d paid his dues too. But he also wrote a lot of cool songs that crossed over into rock-land.”

“Stevie played the blues but he also wrote hits, and that’s a cool thing. Jack White from The White Stripes is doing the same thing now. He’ll play songs in concert and I guess a lot of fans won’t know what it is – it’s Son House,” Joe Perry said.

Born in Lawrence, Massachusetts back in 1950, Joe Perry is one of the most influential American guitarists in history, he helped Aerosmith to become one of the biggest bands that came out of the United States. They have sold an estimated amount of more than 150 million records worldwide. The group was inducted into the Rock and Roll Hall Of Fame back in 2001.

Stevie Ray Vaughan impressed the influential British guitarist Eric Clapton since the first time he ever heard him on the radio. Later on the two had the chance to meet and play live together. Vaughan’s last concert that happend just a few hours before his tragic death in a helicopter crash had Clapton among the ones who played with him on stage.

In an interview for the film “A Tribute to Stevie Ray Vaughan” released in 1995 (Transcribed by Rock and Roll Garage), Eric Clapton talked about the late Texan guitarist. He recalled Vaughan’s unique style that impressed him.

“I was in my car and I remember thinking ‘I have to find out before the day is over who that guitar player is. That doesn’t happen to me very often. About three or four times in my life I felt that way in a car listening to the radio where I’ve stopped the car, pulled over and listened and thought: ‘I’ve got to find out before the end day’. Not sooner or later, but ‘I have to know now who that is’. I remember being fascinated by the fact that he never ever seemed to be lost in any way.”

“It wasn’t ever that he took a breather or paused to think where he was going to go next. It just flowed out of him. Always seemed to flow out of him and actually even that doesn’t come just with virtuosity, practice or any of those. It’s not a question of doing it over and over again or anything like that. It’s just that he seemed to be an open channel. He just flowed throught him, he never ever seemed to kind of dry up.”

“Because when I play, I sometimes stop. Every now and then I just stop and think ‘what I’m going to do know’. I don’t want to repeat myself so I get caught up somehow. You freeze and most players do, I never saw him do that. So he was channel in some way.”

“I saw him play in London one time. So I sat about six rows back at the Hammersmith Odeon and for about the first 10 minutes I though I wasn’t going to be able to take it because it was so loud. I thought ‘I can’t take this’ and actually got used to it. Within 20 minutes after after that I was used to it and it was right. It got me, become all right.”

“At the same time was kind of like that thing I had to surrender to it completly and in a way. When we were in Alpine Valley I couldn’t let myself do that. I had to put up a bit of resistence in order to keep my own kind of self-esteem up. Because I wouldn’t been able to go on otherwise. I’m not joking. To been up to completly absorbed by what he was doing, I would have thought “what’s the point?’ And done kind of done a runner and I cleared off, run away,” Eric Clapton said.

Clapton still is a great friend of Stevie’s older brother Jimmie Vaughan, who is often touring the British guitarist as his opening act.

The ZZ Top vocalist and guitarist Billy Gibbons is another legendary Blues Rock musician that loves Stevie Ray Vaughan. Talking with Sammy Hagar (Montrose, Van Halen) on the Red Rocker’s show “Rock & Roll Road Trip” back in 2017, the artist who was like Vaughan born in Texas listed the 7 Blues artists that he considered the best of all time and one of them was SRV. Over the years, Gibbons gave many guitars to Stevie, like a 50s-style maple neck Stratocaster. According to SRV Archive, the late musician “kept the tremolo arm, pickups and frets in their original condition. But added his signature and initials on the neck plate and pickguard.”

Like Clapton, Billy Gibbons is also a good friend of Stevie’s older brother Jimmie Vaughan, who was ZZ Top’s opening act when he was still a member of the group The Nightcrawlers in the early 70s. During the last years they have performed together at the end of the year, forming a supergroup for the event called “The Jungle Show“.

Gibbons remains as one of the most successful guitarists from Texas. He had the chance in the early of his career when he was still a member of The Moving Sidewalks to meet and tour with the legendary guitarist Jimi Hendrix. Then he formed  ZZ Top, that band that would lead him to stardom alongside Frank Beard (Drums) and Dusty Hill (Bass). The Blues Rock group sold an estimated amount of more than 50 million records worldwide. The were also inducted into the Rock and Roll Hall Of Fame back in 2003 by Keith Richards.

Considered one of the best Blues guitarists of all time, B.B. King was a huge fan of Vaughan’s technique and even said that he had a father and son relationship with the late guitarist.

Interviewed for the TV special “A Tribute to Stevie Ray Vaughan“, released in 1996 (Transcribed by Rock and Roll Garage), the artist praised Vaughan, saying: “Stevie had many ways of showing you that he had not only talent but he had the feel for playing Blues. His hands seemed to be flawless the way he moved with it.”

“When I play, I play sort of like talking, you know, syllables, you say a sentence here, a sentence there. Then, I’ve to stop and think for something else to keep my conversation going. But his didn’t seem to be that at all. It was fluent. He flowed when he played. He could get something going and it was like a song and it would just go on and on. Ideas continuosly flowed. I don’t have that. There is not a lot of people that I hear that have that but Stevie had it.”

In an old interview posted by SRV Archive Youtube Channel (Transcribed by Rock and Roll Garage), King recalled their special father and son relationship, saying: “When I first met Stevie I met him with his brother. After meeting him our communication started to be more like a father-son relationship. So we were very close, very, very close. He used to come to me when he had problems. He used to call me and we talked. I loved the guy,” BB King said.