The organizers of the English festival “Stone Free” announced the headliners of the 2018 edition.

A new edition will return to the original two-day format after going through changes this year, featuring only one day.

On June 16, 2018, Saturday, the main headliner will be Scorpions accompanied by Megadeth. On Sunday, the headliners will be Yes with Anderson Rabin Wakeman and former Supertramp vocalist Roger Hodgson. 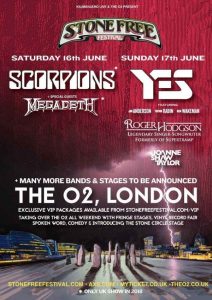 The festival will be held at the 02 Arena in London, England, and will feature a vinyl record show, a garden with beers available and a lounge. The rest of the lineup will be announced shortly.

Stone Free had its first issue in 2016 and featured Alice Cooper and Rick Wakeman from headliners.

Name of the festival

“Stone Free” is a song written by Jimi Hendrix and the second song recorded by the Jimi Hendrix Experience. It has been described as a “counterculture anthem, with its lyrics praising the footloose and fancy-free life”, which reflected Hendrix’s restless lifestyle.

Instrumentally, the song has a strong rhythmic drive provided by drummer Mitch Mitchell with harmonic support by bassist Noel Redding. “Stone Free” was issued on December 16, 1966, as the B-side of the Experience’s first UK single “Hey Joe” and later included on the Smash Hits compilation album.