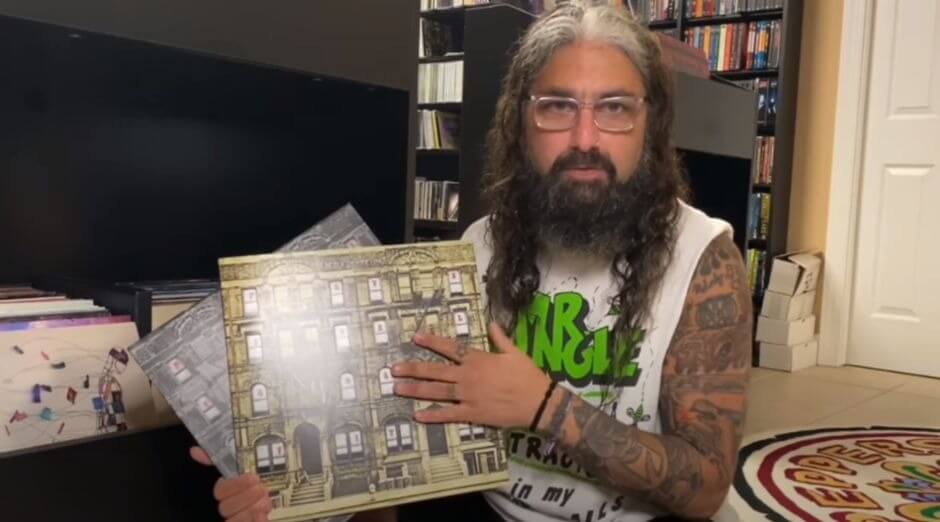 Drummer Mike Portnoy, famous for his work on Dream Theater gave his opinion on all Led Zeppelin albums on a video posted on his official Youtube Channel. The musician talked about his vinyl collection and showed all the albums from the hard rock band.

“The first Zeppelin album, this was a game-changer that’s pretty much closed out the ’60s. The 60s were all about The Beatles, The Stones, The Who, The Kinks, and then comes Led Zeppelin to usher in the ’70s and become one of the biggest rock bands of all time.”

“But of course, [drummer] John Bonham, one of my all-time heroes… So, the first album – ‘Dazed and Confused’ obviously is a masterpiece – opening with ‘Good Times, Bad Times,’ such great drumming…”

“‘Communication Breakdown’ is a classic; ‘How Many More Times’… I mean, classic blues-based rock. [Guitarist] Jimmy Page at that point had come out of The Yardbirds, [bassist] John Paul Jones was a famous session guy, and then [singer] Robert Plant and John Bonham rounding out the band, which were originally The New Yardbirds.”

“And I think that [the late The Who drummer] Keith Moon said, ‘Oh, that’s gonna bomb like a lead zeppelin.’ And I think that’s how they got their name – rumor has it. And I actually have another copy of ‘Zeppelin I’ hanging on my autograph wall over there, signed by Robert Plant. I’ve met Jimmy Page many, many times, but never got him to sign anything. So one of these days hopefully I can get Jimmy’s autograph on there with Robert’s,” Mike Portnoy said.

“[1969’s] ‘Zeppelin II, maybe my favorite Zeppelin album, I would say between ‘II,’ ‘IV,’ and ‘Physical Graffiti,’ and ‘Houses of the Holy’ too, I love them all, but ‘Zeppelin II’ is such a classic. Heartbreaker,’ ‘Whole Lotta Love,’ ‘Moby Dick,’ of course, ‘Ramble On,’ ‘Thank You’… [Mike’s wife] Marlene wanted ‘Thank You’ to be our wedding song, and I feel bad to this day that we didn’t do it because Robert wrote that song about his child that passed away, so I didn’t think it was appropriate for a wedding song.”

“So our wedding song ended up being ‘My Love’ by Paul McCartney and Wings, but she really wanted ‘Thank You.’ So if we ever get re-married or redo our vows, we’ll have ‘Thank You’ next time. But anyway, the bonus vinyl with alternate tracks, there’s a lot of great outtakes from this album on the internet where you could hear the isolated tracks, and Bonzo’s drumming was just, oh, so good.”

“[1970’s] ‘Zeppelin III’ is known more like their acoustic album. After the first two kinda hard-rockers and blues albums, this was more acoustic than the first two, but there’s still some classics on here.”

“‘Immigrant Song’ is a classic. I love the way that the volume, the beginning of the ‘Immigrant Song’ is lower, so it’s almost like you can hear it creeping up, you turn up your volume, and then it explodes. Celebration Day’ is a classic; ‘Out on the Tiles’ is a classic, and of course, ‘Since I’ve Been Loving You,’ one of the greatest blues songs. I did that with Dream Theater a few times.”

“A great, great album; and a lot of people don’t realize it’s John Bonham doing backup vocals, I think it’s ‘Gallows Pole.’ There’s great live footage of them doing some acoustic songs from this album, and Bonham is the one that’s singing in the band – he was the second vocalist or something.”

“But this is like when you think of Rush’s [1981 album] ‘Moving Pictures.’ That’s the classic quintessential album – not necessarily my favorite, but the one that’s the go-to album. Obviously, ‘Rock and Roll,’ ‘Stairway to Heaven,’ ‘When the Levee Breaks,’ one of the most iconic drum grooves ever, and also the beginning of ‘Rock and Roll’ – one of the classic drum intros ever.”

Houses of the Holy

“This [1973’s ‘Houses of the Holy’] might be my favorite Zeppelin album. I don’t know, I love them all. ‘Houses of the Holy,’ to me, is such a great one. The artwork was done by Storm Thorgerson who I ended up working in Dream Theater.”

“He did all the Pink Floyd stuff and did this work with Zeppelin. But yeah, you’d never get away with this album cover these days, not a chance in hell. But I love this album, I just love the deeper tracks.”

“I love the diversity on this album. Obviously, everybody knows ‘Kashmir’; ‘Kashmir’ is a classic, I got to cover that with Sons of Apollo with an orchestra. Which is amazing. But I mean, the deeper cuts on here, I love ‘In the Light,’ one of my favorite songs ever.”

“And I did a Zeppelin tribute band with Paul Gilbert, Dave LaRue, and Daniel Gildenlow, and we did all the deep cuts. We didn’t do ‘Stairway to Heaven,’ we didn’t do ‘Whole Lotta Love,’ we did stuff like ‘In the Light,’ we did ‘Night Flight,’ ‘The Wanton Song’…”

“Anyway, this is my favorite Zeppelin album, maybe, definitely one of my favorite double albums in rock ‘n’ roll history. It’s such a classic. And my daughter Melody lived around the block from this building [on the front cover] for about a year. She lived in New York City, literally one block away from this building, so it was really cool to pass by it all the time.”

“[1976’s] ‘Presence’ is probably, I don’t know, the dark horse of their catalog. It’s not my favorite album, and I know it’s a lot of people’s least favorite album. And I would probably be in that category as well.”

“I mean, of course, ‘Achilles Last Stand’ is a classic. I did some of that with Dream Theater. You know, ‘Nobody’s Fault But Mine’ is a classic. But these deeper cuts – not my favorite Zeppelin album. But of course, it’s a must-have,” Mike Portnoy said.

In Through the Out Door

“The last official one before Bonham died [in 1980], [1979’s] ‘In Through the Out Door,’ which was released with something like eight different covers, and when this came out on vinyl when I was a kid, they were released in the stores with this paper bag, so you didn’t know which cover you were getting.”

“So it was a very cool idea. Also, if you poured water on the artwork, it would create these different swiping things. But anyway, this was Bonzo’s last album before he passed away. In the Evening,’ what a great opener, just a classic. Talking about ‘Thank You’ earlier, ‘All My Love’ would’ve been a great wedding song – that’s a great one, love it. ‘Fool in the Rain,’ one of John Bonham’s greatest grooves ever, doing the Bernard Purdie shuffle, Jeff Porcaro shuffle. But in the hands of Bonham. A great album.”

“Sadly, the last one, before it all ended, they put out ‘Coda’ [in 1982], which was all different outtakes and things that hadn’t been released through the years, and there’s some great stuff on here. Obviously, ‘Bonzo’s Montreux’ is one of the most iconic drum pieces. This is kind of like a closing chapter; perfect name, by the way, ‘Coda,’ as a musical term.”

“The song ‘Layla,’ for instance, the whole song verse-chorus-verse-chorus. Then the coda is the bit on the end like a whole other song that’s tagged on the end. So, a great musical term for an album title, for something put out post-breakup,” Mike Portnoy said.