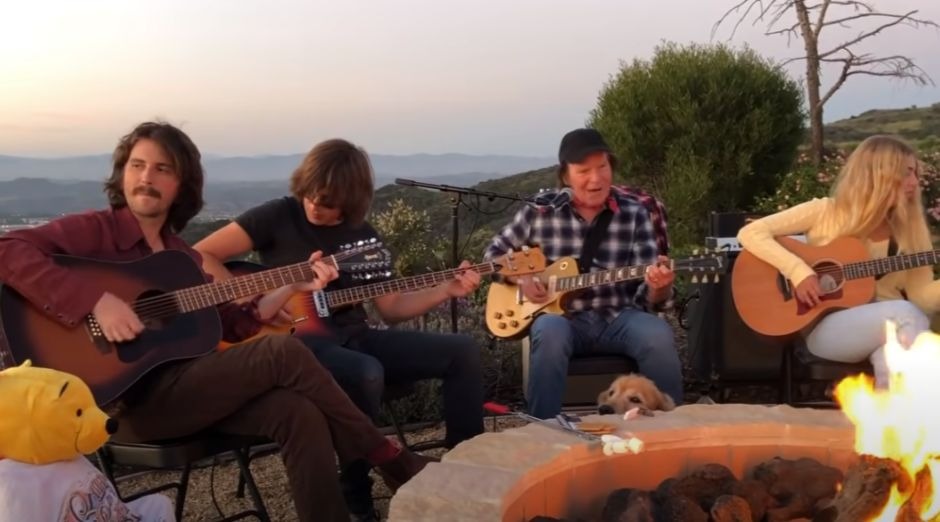 The legendary Creedence Clearwater Revival vocalist and guitarist John Fogerty continues to play during the lockdown to help the fight against the Covid-19 outbreak. The musician is constantly posting classics performed by him and his kids. Some of them are already part of his solo band.

In the video, John Fogerty talks about the song’s composition, saying:

“Just above the street from the house where I lived in El Cerrito was a pharmacy: a drugstore with a soft drink machine. And one of the drinks they served was ‘Green River’. I was looking at the label on that syrup bottle when I was about eight years old and said, ‘I will keep this. Is important.’ And for some reason it got in my head and eventually it all became a song.”

About performing at home with his family, the musician said in an statement:

“While self-quarantining together the Fogerty Family recreated the cover of Cosmo’s Factory transforming it to Fogerty’s Factory. The family have also taken to their home studio during this isolation to create some music together, The Family Band. “Bringing a little light from our home to yours. We are having a little family fun together during the pandemic. It’s such a great feeling to be making and playin’ music surrounded by love.”

“We all need to celebrate the life we have and remember how precious it is. I love music, I am listening every day. Makes everything feel better for me. Put the records on, pull out the old guitar, turn the radio up.. and dance to the music!” – John Fogerty While the Quarantine continues the Fogerty Family – Shane and Tyler (Hearty Har) and Kelsy – will be joining their Dad for some musical fun covering songs from the classic Fogerty collection.”

“You can see the foursome together on “Down on the Corner” with more to be released over the coming weeks. Another Fogerty, Bob Fogerty who took the original album cover, came in to shoot the re-make. Released in 1970 Cosmo’s Factory turns 50 in July and Fogerty’s 50 Year Trip continues! Stay tuned to the John Fogerty YouTube channel for more Fogerty Factory music!”

Fogerty already released other Creedence classics played with his kids as you can see below:

Dave Greenfield, Stranglers keyboardist dies of Covid-19
Tony Iommi says if Dio was still alive they would be working together
Advertisement
To Top