Many biographical movies are being released after the success of Queen, Mötley Crüe and Elton John‘s movies. Guns N’ Roses bassist Duff McKagan revealed that he would like to see Brad Pitt playing him in a possible biopic of the band. The musician talked about rock and roll and cinema in an interview with Metal Hammer.

What do you think about the recent spate of rock biopics that seem so popular?

“I don’t know. I kind of like to have my memories of those people unsullied. And I am a huge Queen fan, so I saw Bohemian Rhapsody and if it had been a blank screen with two hours of Queen’s music I’d have loved it, but there were some obvious factual inaccuracies that I could have pointed out. But I don’t want to be that guy. I’ve seen The Dirt, too, and it kind of captured the darkness of the 80s Sunset Strip scene. I’m going to watch the Elton John one when it comes out and I’ve got Lords Of Chaos on my watchlist. But, really, I spend my whole life in rock and roll – I’d rather read a history book.”

Who would play you in a film? 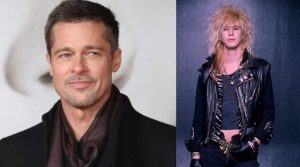 “Brad Pitt. Who else? Come on! I’m joking. I don’t know, I don’t think about stuff like that… so let’s just keep it at Brad Pitt.”

“Not getting to spend enough time with your family. Easily.”

What’s the best advice you’ve ever been given?

“Fuck! So many. My wife said something when we first got together that has really stuck with me. She said, ‘99% of the stuff you worry about never comes true.’ It’s fucking true! You wake up at three in the morning worrying about stuff that never actually happens.”

“Yeah, but I don’t like the term. The bands and the crowd are so in it together and ‘rock star’ always felt like this thing above it all. And I’m not that. I remember doing a signing when we first came back with Velvet Revolver, Slash and I, and these kids were going, ‘Legends! You’re legends!’ Really? Legends? We were only 40! It’s strange to think in those terms.”