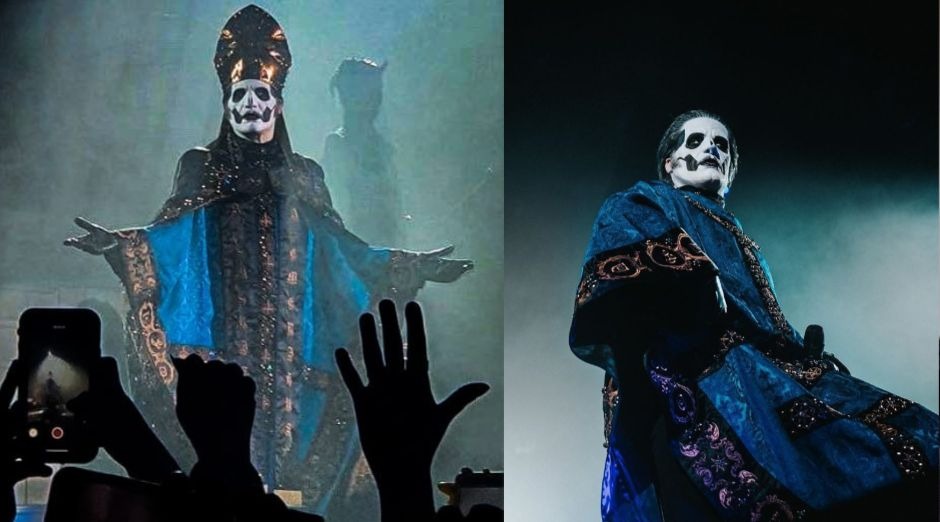 Ghost revealed, at the end of a show held in Mexico City in March 3, it’s “new frontman”: Pope Emeritus IV. The character will be taken over by Tobias Forge in the next cycle of work of the band, thus concluding the period of the album “Prequelle”, released in 2018 and promoted on tour since then.

Cardinal Copia was “transformed” into Papa Emeritus IV during the saxophone solo of the song “Miasma”. Also, Pope Nihil, an ancestor of all other pontiffs, suffered a kind of collapse. Several sisters entered the stage, arrived at Cardinal and made him the new Pope.

“Gracias México City for your hospitality and warmth. We couldn’t pick a better place to witness the anointment of Cardinal Copia to Papa Emeritus IV. Papa and the ghouls are incredibly thankful for all your wonderful gifts. Looking forward to seeing all of you in 2021.”

Gracias México City for your hospitality and warmth. We couldn’t pick a better place to witness the anointment of Cardinal Copia to Papa Emeritus IV. Papa and the ghouls are incredibly thankful for all your wonderful gifts. Looking forward to seeing all of you in 2021. #papaemeritusiv #namelessghouls #namelessghoulettes

Each Ghost album and tour has a different character taken on by Tobias Forge. In the first three, they were different versions of Papa Emeritus, ranging from number one to three. On “Prequelle”, Pope Emeritus III was removed from his role for Cardinal Copia to arrive.

Ghost has no plans for major tours in 2020. They completed the dates that have already been scheduled since 2019. In the next few months they will be focused on working on the group’s next album, with a release forecast for the beginning of 2021.

Also, the band’s style mixes doom metal, traditional heavy metal, psychedelic rock typical of the 70s, added to the most modern alternative rock. The lyrics of the songs are mostly of a Satanist nature. But in a theatrical way, which contrasts with the pop sensitivity and the clean vocals that permeate the songs. The vintage keyboards and very clean production, without exaggeration of compression, make the albums sound entirely analog and also refer back to the 70s. In addition, several critics described their music as “seductively smooth and memorable”.