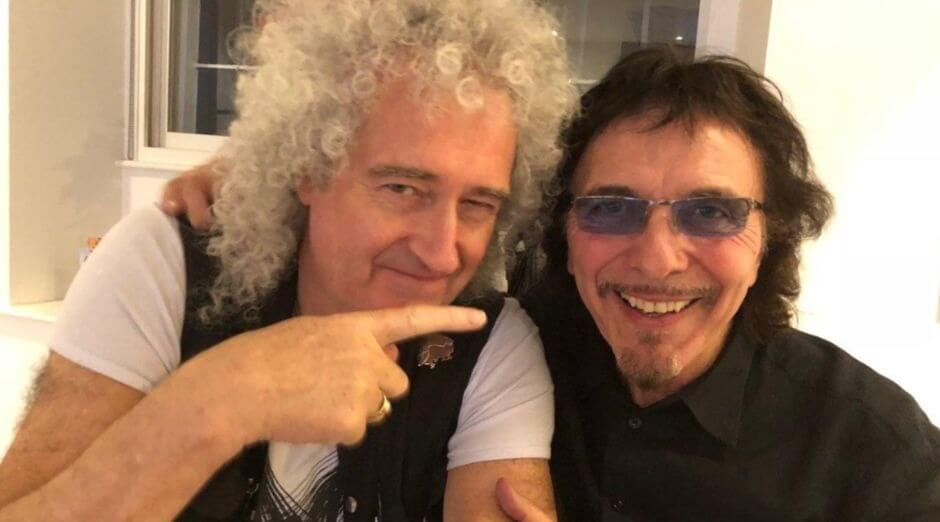 Queen‘s Brian May and Black Sabbath‘s Tony Iommi are close friends and as revealed by both of them in interview they frequently jam while visiting each other. Talking with Guitar World May said that Iommi is the father of Heavy Metal.

Brian May said about his friendship with Tony Iommi:

“We do more talking than anything else, but we do a lot of talking. He is really my dearest friend in the business and has been for so many years. I could write books about Tony because he’s just the most [pauses]… I don’t even know how to put it into words. You know, he’s a luminous human being is Tony, with a wonderful, kind nature and an incredibly baffling sense of humour. And, of course, he is the father of heavy metal.” 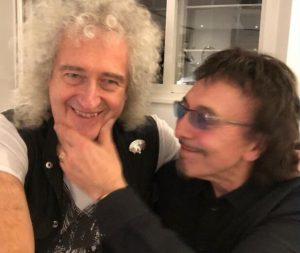 “He did that. He made that happen. And it’s from his fingers and his mind. That young ex-welder, he made that happen. So, you know, he forever wears that medal, I think. He founded this stuff, heavy metal, in my opinion. I mean, I think probably most people would agree.”

Second! You’re doing really well. You’ve guessed the top two of the metal poll! Randy Rhoads was third. The result of the poll seems to give props to the classic era of metal. You have to go to fifth to see Mark Tremonti, ninth for Synyster Gates, 12th for Nuno Bettencourt; but the results are very classic-oriented,” Brian May said.

Talking about the metal poll that elected Tony Iommi as the best guitarist of the genre the musician gave his opinion on Randy Rhoads, Nuno Bettencourt and more:

“Oh, now there’s an awesome player (Randy Rhoads). Incredible. Nuno is outrageous! We’ve played together a lot and we’ve hung out together a lot. I think one of the most memorable nights was when Extreme played the Freddie Tribute (concert at Wembley Stadium in 1992). I didn’t really know what was gonna happen. They kept it a secret. I thought they were going to come on and play a lot of their hits, but they came on and did an entire Queen extravaganza.”

“And I watched it with my jaw dropped open. It was incredible, the depth they’d gone into to play it so beautifully and perfectly but also with their own interpretation so that was an amazing moment. I remember talking to Nuno afterwards and I said, ‘I had no idea you were going to do that’ and he went, ‘No, you didn’t, did you?’ Amazing! But his soloing? Beyond belief! I feel rather sad that they didn’t continue on as a band. They didn’t really achieve their potential in the world. It’s very odd,” Brian May said.

“They had that massive hit with More Than Words and then I think unfortunately it was difficult for their audience to appreciate what they really were as a band. It was one of those strange moments where you get a hit but it doesn’t define you in the way you want to be defined. That’s the way I see it. Because they’re a magnificent group.”

“Nuno’s really very underrated I would say. He’s one of the greats. One of the greatest living guitarists, I would say. As is – you know who we haven’t mentioned – Eric Johnson! I mean, there is a phenomenon. There is just another whole universe of guitar playing. It’s astoundingly beautiful.”

“And I have to mention my friend Arielle who’s been on tour with him and often does his parts for him cos he doesn’t feel like doing them. He wants to do something else! She’s an extraordinary player, too. She’s not that famous yet, but I’m sure she will be. She gets this inexplicable tone. It’s like liquid metal! I don’t know how to describe it. It’s like golden peas coming out of a pod!”

“It’s a bit like Eric, you know, you just don’t know where that sound comes from. That’s what I love about guitar playing. You look around and you see endless wonders and you don’t have to decide what you like best. You can just enjoy it all!”