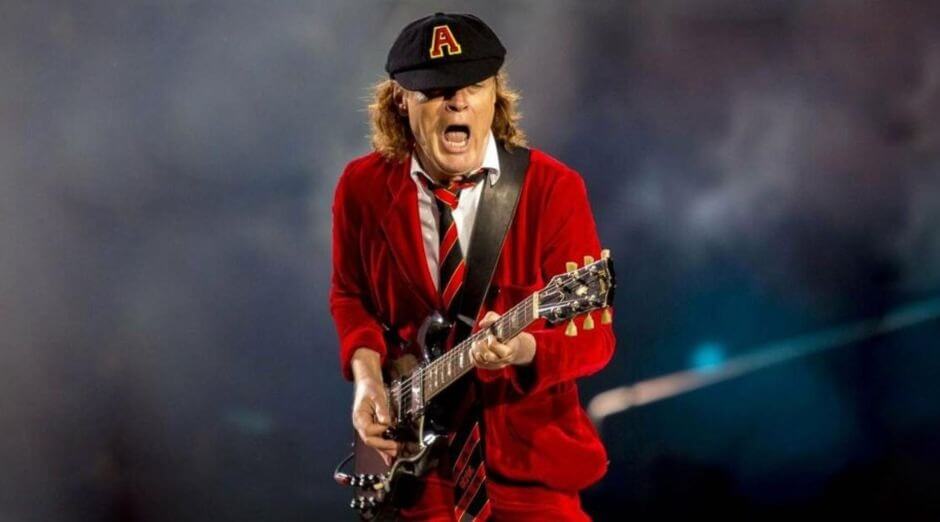 Legendary AC/DC guitarist Angus Young revealed that he moved a lot on stage to protect himself from bottles back then. The musician recalled in an interview with Total Guitar that the band used to play in dangerous places with violent audiences.

Angus Young says he moved a lot on stage to protect himself from bottles:

There was a defining moment in April 1974 when AC/DC appeared at an open-air concert in Sydney’s Victoria Park, and you wore your old school uniform on stage for the first time…

“That was the most frightened I’ve ever been on stage, but thank God, I had no time to think. I just went straight out there. The crowd’s first reaction to the shorts and stuff was like a bunch of fish at feeding time – all mouths open. I had just one thing on my mind: I didn’t want to be a target for blokes throwing bottles. I thought if I stand still I’m a target. So I never stopped moving. I reckoned if I stood still I’d be dead,” Angus Young said.

The band played on the Aussie pub circuit, where audiences were notoriously tough. How scary was it?

“Some of the places we played were worse than toilets, let me tell you, and there was that much scrapping going on, you were behind the amps! When I was at school and there was a dance with a band, it was always a band like Van Halen, with the guy with the long blonde hair wiggling his hips.

“In the pubs we played in, in front of that hot, sweaty, beer-swilling crowd, you couldn’t even hope to do that. This was the kind of audience you couldn’t even tune your guitar to. If you bust a string, that was it. Sometimes you finished with just two strings, because there was no way they were going to put up with a couple of minutes of you fixing the guitar.”

“I remember one night I said to the rest of the band, ‘I’m not going out there.’ The police couldn’t get in the place. There was some madman running around inside the hall with a meat cleaver, chopping into the people! And the front row was all bikers. I said, ‘They just want blood!’ You looked out and it was just like murderers’ row, and the look on their faces is like, ‘Send us the little guy in the shorts!’” Angus Young said.

Is it true that Malcolm once had to ‘assist’ you in getting on stage?

“Yeah. Suddenly I just felt a boot and I was on. And there’s this deathly silence. All you can do is play – and pray! You put your head down and hope a bottle doesn’t come your way. That became part of my stage act. I learnt to duck and keep moving,” Angus Young said.