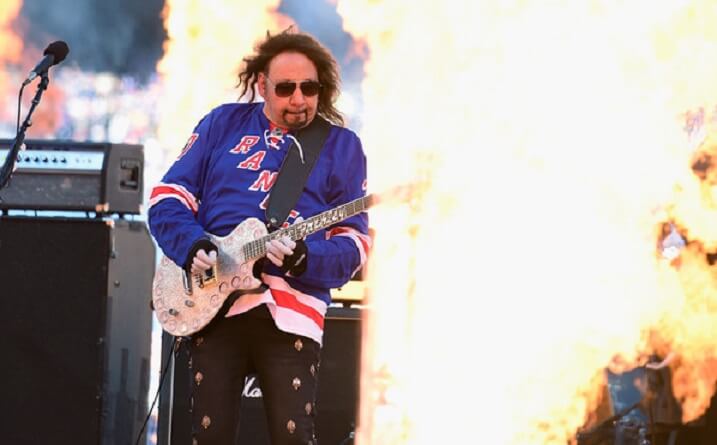 In a recent questions and answers session, Ace Frehley said he feels guilty because he never took a guitar lesson in his life.

“I never took a guitar lesson, and just about every day, somebody comes up to me and says, ‘If it wasn’t for you, I never would have picked up a guitar.’

“I feel guilty because I never took a guitar lesson. I go, ‘You’re idolizing an idiot.’ [Laughs] I don’t even know what I’m playing half the time. I can’t verbalize it – it just comes out of the speakers.”

“My favorite KISS song is ‘Deuce’ [from the band’s 1974 self-titled debut album]. Not only is it a great, ass-kicking song – it was the first [KISS] song that I heard.

“When I auditioned for KISS, Paul and Gene played ‘Deuce’ for me and they said, ‘It’s in the key of A. Plug in and play a solo.’ That’s how I got the gig, so ‘Deuce’ has a special place in my heart.

“I love playing it live, and I enjoyed playing it when I was in KISS. It’s a real kick-ass song, so that’s probably my favorite KISS song.”

What’s your favorite album that you recorded?

What was it like growing up in the Bronx?

“I got involved with a gang because I got tired of getting beat up.

“That’s pretty much why I got involved with the gang scene, even though it wasn’t something that I really was excited about or really wanted to do. I just wanted protection.

-As I got older — I joined the gang when I was about 13, and that’s around the time I picked up a guitar, so by the time I was 14, I was already in bands and performing on weekends at, like, church dances, so on and so forth – wherever we could play.

“By the time I was 15, I was really into it and working almost every weekend, and I’d be getting calls from guys in the gang going, ‘Hey, we got a fight tonight in a schoolyard. Bring a switchblade.’