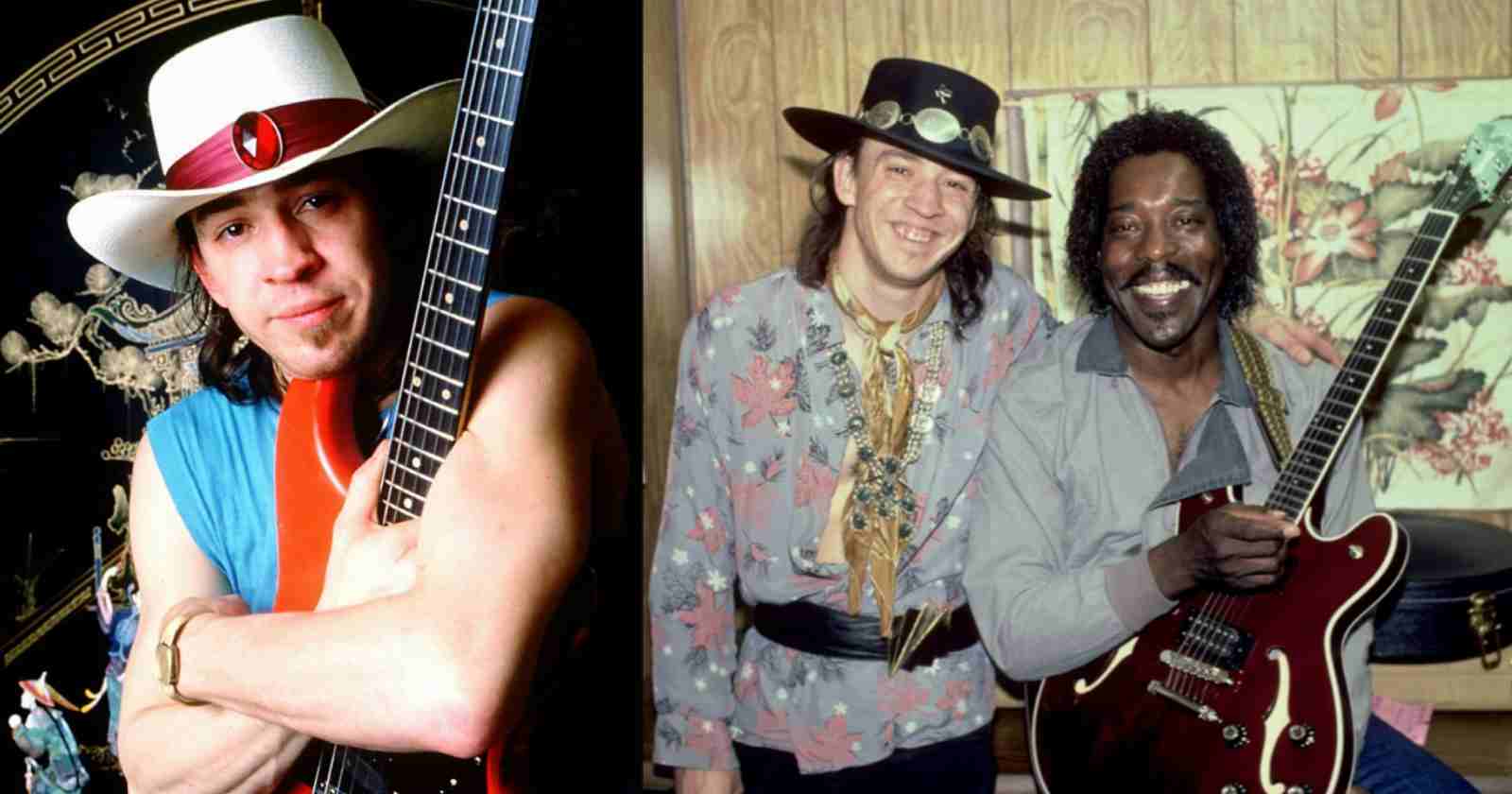 Born in Dallas, Texas back in 1954, Stevie Ray Vaughan became one of the most praised and influential Blues guitarists in history. His short career tragically came to an end when the helicopter he was in back in 1990 crashed and he died at the age of 35.

The musician was important to bring the Blues back to the mainstream in the 80s and he even helped many legendary artists of the genre who were not being able to get record deals at the time. He never forgot about the musicians that influenced him the most and in an 1986 interview given after the release of his live album “Live Alive”, made available on Youtube by KellyWurx Films channel, the musician listed 10 musicians that were an influence.

Rock and Roll Garage selected what Vaughan said about those musicians and his connection with them over the years.

Stevie’s older brother, Jimmie Vaughan was his first influence, since he was the one who introduced his little brother to music. Born in 1951, 3 years before SRV, Jimmie started his career during the late 60s and in 1969 the band he was playing with even had the opportunity to be Jimi Hendrix‘s opening act. The most famous band he was part of was The Fabulous Thunderbirds.

In an interview with Guitarist magazine back in 1988, Stevie recalled the influence his older brother had on him, saying: “With that kind of an influence as your big brother it’s real easy to get into playing. I saw how much fun he was having with it. Also I saw how dedicated he was to it. It gave me a lot of inspiration. When he would leave, partially because he was big brother and you’re not supposed to touch big brother’s stuff. Also partly because he told me not to touch his guitar… ahh, I did.”

In an interview for the TV special “A Tribute to Stevie Ray Vaughan“, released in 1996 (Transcribed by Rock and Roll Garage), BB King praised the late guitarist and his unique technique and style, saying that: “Stevie had many ways of showing you that he had not only talent but he had the feel for playing Blues. His hands seemed to be flawless the way he moved with it.”

“When I play, I play sort of like talking, you know, syllables. You say a sentence here, a sentence there. Then I have to stop and think for something else to keep my conversation going. But his didn’t seem to be that at all. It was fluent. He flowed when he played. So he could get something going and it was like a song and it would just go on and on. Ideas continuosly flowed. I don’t have that. There is not a lot of people that I hear that have that. But Stevie had it.”

One of the most famous Blues musicians in history, B.B King was born in Berclair, Mississippi back in 1925 and died at the age of 89 in 2015. His unique style of playing the guitar and the emotion he put in every note he played was a big influence on many other famous guitar players over the decades. He was inducted into the Rock and Roll Hall Of Fame in 1987 by Sting. Some of his most famous songs are “The Thrill Is Gone”, “Riding With The King” featuring Eric Clapton and “Bring It On Home To Me”.

Another important Blues guitarist, Freddie King was born in Gilmer, Texas in 1934 and died too soon at the age of 42 in 1976. He is often recalled for his powerful voice and distinctive way of playing the guitar. During the early days of their career Stevie Ray Vaughan & Double Trouble played live a cover of King’s intrumental song “Hideaway”. “Going Down”, “I’m Tore Down” and “Stumble” are some of Freddie King’s most famous tracks.

Freddie King was inducted into the Rock and Roll Hall Of Fame back in 2012 by ZZ Top members. During the induction speech, the band said that King was the “Texas cannonball”.

Also nicknamed “The Master Of The Telecaster (Guitar model),” Albert Collins was noted for the use of altered tunings and a capo. He is remembered for songs like “Cold, Cold Feeling”, “T-Bone Shuffle” and “Blue Monday Hangover”.

Stevie Ray was lucky enough to share the stage with his brother and Collins in 1989 at the Bush inaugural ball. The musician died 3 years after Vaughan, in 1993 at the age of 63.

One of the first famous musicians to use the Flying V guitar model, Albert King is most known for the classic 1967 album “Born Under A Bad Sign”. The legendary left-handed guitarist and SRV were friends and even played together in 1983 at CHCH-TV studios in Canada when Vaughan was 29 and King 60. 16 years later, in 1999, that performance was transformed into an album called “In Session”.

In an interview with Guitar World in 1988, Stevie Ray praised many guitarists, including Albert King, saying: “They’re the pioneers and the innovators and they deserve respect for that. Listening to all the great records by Albert King and Albert Collins, Otis Rush, B.B. King. There’s millions of records we could talk about and each one of them is unbelievable in its own right,” Stevie Ray Vaughan said.

In an interview with Billy Pinnell back in 1984 (Transcribed by Rock and Roll Garage), the Texan musician recalled which was the first album that he ever bought and explained the meaning of that record to his career.

When the interviewer asked Vaughan about the influence of the American guitarist Lonnie Mack, the musician revealed that the first record that ever bought was Mack’s “The Wham of that Memphis Man” (1963): “It was the first album that I ever bought. He (Jimmie Vaughan, his older brother) turned me on to the guy and let me know who he was. I went straight and bought the record. Also was one of the first things that I ever really tried to learn, which is pretty hard thing to learn. But it worked out,” Stevie Ray Vaughan said.

The late legendary Blues musician even co-produced Mack’s 1985 album “Strike Like Lightning” with the musician. Vaughan was also made guest appearances during Mack’s tour to promote the record.

During the 80s they played together several times including at Buddy Guy‘s Legends on July 30, 1989. In an interview shared by SRV Archive on Youtube (Transcribed by Rock and Roll Garage), Guy praised the late guitarist, saying: “Well, I got to know him as one of my best friends before he passed away. He was so much like myself when he it comes to that. There wasn’t anybody that he didn’t pick upon.”

“You could heard Otis Rush on him, you could heard B.B. King on him. Also you could heard Elmore James on him and he just went. So I think that that’s what makes a good guitar player. You get them all and you put them together. I guess that’s why gumbo tastes so good, because you put everything in it,” Buddy Guy said.

Born in Lettsworth, Lousiana back in 1936, Buddy Guy played back in the 60s with Muddy Waters as a session musician at the famous Chess Records. He won 8 Grammy Awards and is considered one of the best guitar players in history. Some of his most famous song are “Feels Like Rain (Featuring Bonnie Raitt), “Damn Right, I’ve Got The Blues”, and “Mustang Sally (Featuring Jeff Beck)”.

Muddy Waters in died in 1983 at the age of 70, two months before the Stevie Ray Vaughan debut album “Texas Flood” was released but the two musicians had the opportunity to meet each other before Waters passing.

In the interview with Billy Pinnell back in the 80s (Transcribed by Rock and Roll Garage) he was asked if he was getting tired to be compared with Hendrix, to which he replied using Muddy Waters as one of the examples: “Yeah, but because people don’t understand there’s only one Jimi Hendrix. I do what I can do. I’m very, very glad to be able to hear him and be influenced by his life and his music. But there is only one Jimi Hendrix. Just like there is only one Bo Diddley. Also only one Muddy Waters and only Howlin’ Wolf.”

One of the most influential guitarists of all time, Muddy Waters is often called the “father of modern Chicago Blues” and was an important figure that influenced musicians that helped to create Rock and Roll music. He is recalled for tracks like “Mannish Boy”, “I’m Your Hoochie Coochie Man” and “Rollin’ Stone”.

One of the most powerful voices of the Blues, Howlin’ Wolf was unmistakable and is best known for classic like “Spoonful” and “Smokestack Lightnin'”. He died in 1976 at the age of 65.

Ia an interview with Michael Corcoran back in 1989, Vaughan recalled the kind of music that his older brother used to bring home and influenced him, naming Wolf as one of the artists: “When we were first startin’ off we had some friends of the family show us stuff. Like one guy played with Ray Sharpe and the Razor Blades. So right off the bat we were playin’ “Linda Lu” (a Ray Sharpe hit), Jimmy Reed. Really hip stuff for little kids.”

Jimmie came right out of the chute, bringing home records by everyone from Muddy Waters, Howlin’ Wolf, B.B. King and Buddy Guy to the Beatles and Hendrix to Wes Montgomery and Miles Davis. All this stuff at the same time. I don’t know how he got the idea to be so hip so quick,” Stevie Ray Vaughan said.

Jimmy Smith is the only musician listed by Stevie Ray Vaughan that dindn’t played the guitar or Blues music. Born in Norristown, Pennsylvania in 1925, Smith was a keyboardist and helped to popularize the Hammond B-3 organ, mixing the Jazz with the 60s Soul music.

He is best known for songs like “Midnight Special”, “The Cat” and “Back At The Chicken Shack”.