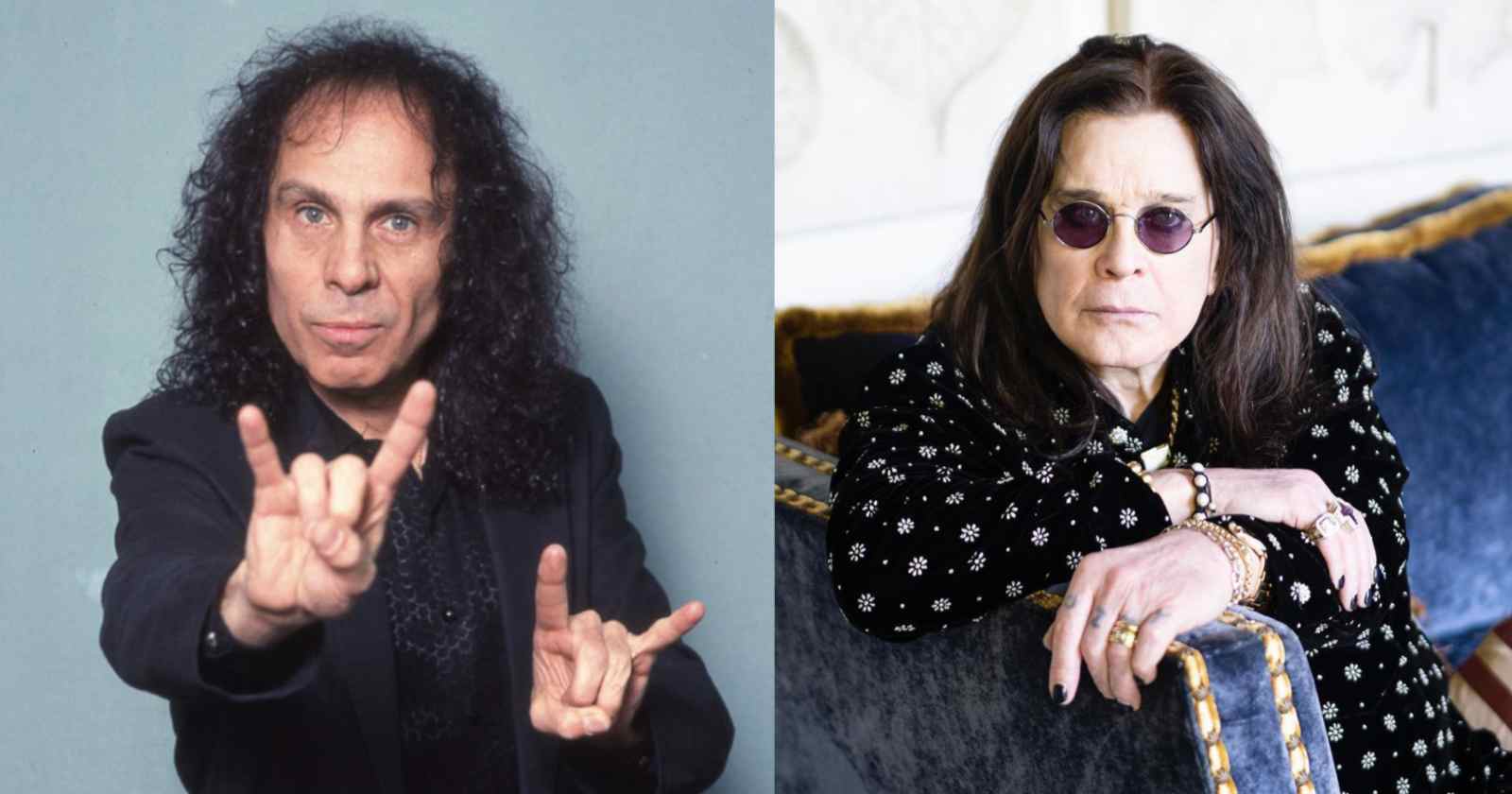 Black Sabbath created Heavy Metal with the release of their debut album in 1970 and became one of the most important bands in music history. After 8 studio albums with the group, singer Ozzy Osbourne was fired in the late 70s due to addiction and behavior issues, being replaced by ex-Rainbow vocalist Ronnie James Dio, who recorded the two classic albums with Sabbath “Heaven & Hell” (1980) and “Mob Rules” (1981) before leaving the group.

After Ozzy started his solo career and Dio joined the British band, a rivalry was already created by fans and the press, being fueled by the two during interviews, because they never said many good things about each other in the press.

In an interview with Steve Newton back in 1985, when Ozzy had released three successful studio albums “Blizzard of Ozz” (1980), “Diary Of a Madman” (1981) and “Bark At The Moon” (1983), Dio gave his opinion on Osbourne’s solo career, saying: “Well I think he was pretty lucky that he had Randy for a start. And then when he lost Randy he lost most of it I guess. They were lucky he had Bob Daisley for two albums to write all the material for him”.

“Because Ozzy is notoriously a non-writer, even though you may see a credit there. Well we’ll just have to see who has written his material for him this time, because Bob is no longer in the band. His material’s good, it’s well done, it’s interesting. Again, Ozzy’s got a lot of character, and I quite like the things he’s done.”

Back in the early 90’s Dio joined Black Sabbath again and recorded the new studio album “Dehumanizer” (1992). But when during the tour to promote the record, the band decided to accept Ozzy’s offer to be his opening act in two concerts, Dio refused to sing in those two shows (Judas Priest’s Rob Halford replaced him) and that made the group once again fall apart.

He recalled that story in an interview with Eric Blair back in 2002 (Transcribed by Rock and Roll Garage), where he also gave his opinion again on Ozzy: “I refused to be the opening act for Ozzy, because this was a Sabbath show. We already had a show we were going to play in Long Beach or someplace else here in LA and suddenly after we’d just come back from Iceland, I got a call saying: ‘Well, now it’s been changed. The last two gigs you’re gonna be opening for Ozzy’ and my reply was ‘No, I’m not. I won’t do that’.”

“So almost those two months of touring in America they still believed that I was going to do that show. I kept telling them ‘No, I’m not going to do it’. Two weeks before Geezer said to me ‘You really gonna do the show, aren’t you?’ and I said ‘I told you. I’m gonna tell you only one more time. I refused to do it. How could you possibly do that to someone how has called your guitar player a homosexual, you know he is damn well not”. People’s sexual preferences is their own sexual preference, doesn’t matter to me. But Tony is not that and that should have annoyed him for not being that. Maybe nothing annoyed Tony, because maybe money was more important. But it annoyed me, this was my band too, I’m in Sabbath and I refuse to take that crap.”

“Let alone the horrible things that were said about me over and over again. So there was no reason on earth for me to show as they put it in those days ‘respect to Ozzy’. I don’t respect you for start. I don’t need to show you any respect and I won’t, so that was the end of it.”

Eric Blair then asked Ronnie James Dio if he didn’t had any respect for Ozzy at all and if he watched “The Osbournes” and he quickly replied “no” for both questions. Then he explained better his vision: “I can’t say I don’t have respect for Ozzy. Let’s face it, he was one of the guys in that band who created Heavy Metal music. What more respect can I give him than that? Ozzy was always a good friend of mine when I wasn’t in Sabbath, but when I was he’s always been a miserable person who’s had nothing but bad things to say about me. And I’ve always said good things about Ozzy.”

“So as far as me having to give him respect for that, no, you don’t deserve respect from me with the lack of respect that you given to me. It’s not my job, after all the things that I’ve done in my musical life to have get on my knees and show respect to you. When you can sing as well as I can then I will show you some respect. So I guess you never get any respect from me.”

Dio continued giving his opinion on “The Osbournes” show

“As far as Ozzy program goes, I find it a sin that they taken this man who’s legacy should be what he created with Black Sabbath, what Heavy Metal was because of Ozzy and opened him up like a can of sardines and said ‘Here you go, this is what you get now’. I think is sad.”

“I applaud him for doing what he wants to do. I’ve never had any problem with that whatsoever. But to have give him a salute and say ‘after all the things that have gone down’, no. He doesn’t deserve that from me. But I don’t say bad things about him. Why should I? It’s not gonna change my life or change his. Only thing I know is as a musician I don’t have a lot of peers. That may sound like a pat on my own back but you know what, it’s true. I don’t have a lot of peers. I’m going take that credit for a change, because all my life I haven’t take that credit”.

What Ozzy Osbourne said about Ronnie James Dio after his death

Ronnie James Dio discoverd he had stomach cancer while he was touring with Heaven & Hell, band also formed by Sabbath members Geezer Butler, Tony Iommi and Vinny Appice. He died at the age of 68 in 2010 victim of the disease.

In an interview with Rolling Stone two weeks after Dio’s death, Ozzy lamented the news and praised him: “You know, when anyone dies in this game, it’s sad, I first knew about Ronnie Dio’s sickness a few months back. I sent him a message, saying if there’s anything we can do to help, please don’t hesitate to call us. I wasn’t a really big friend of Ronnie Dio, I’ve met him a few times over the years. But he was a great, great singer. It’s a terrible loss. God bless you, Ronnie.”