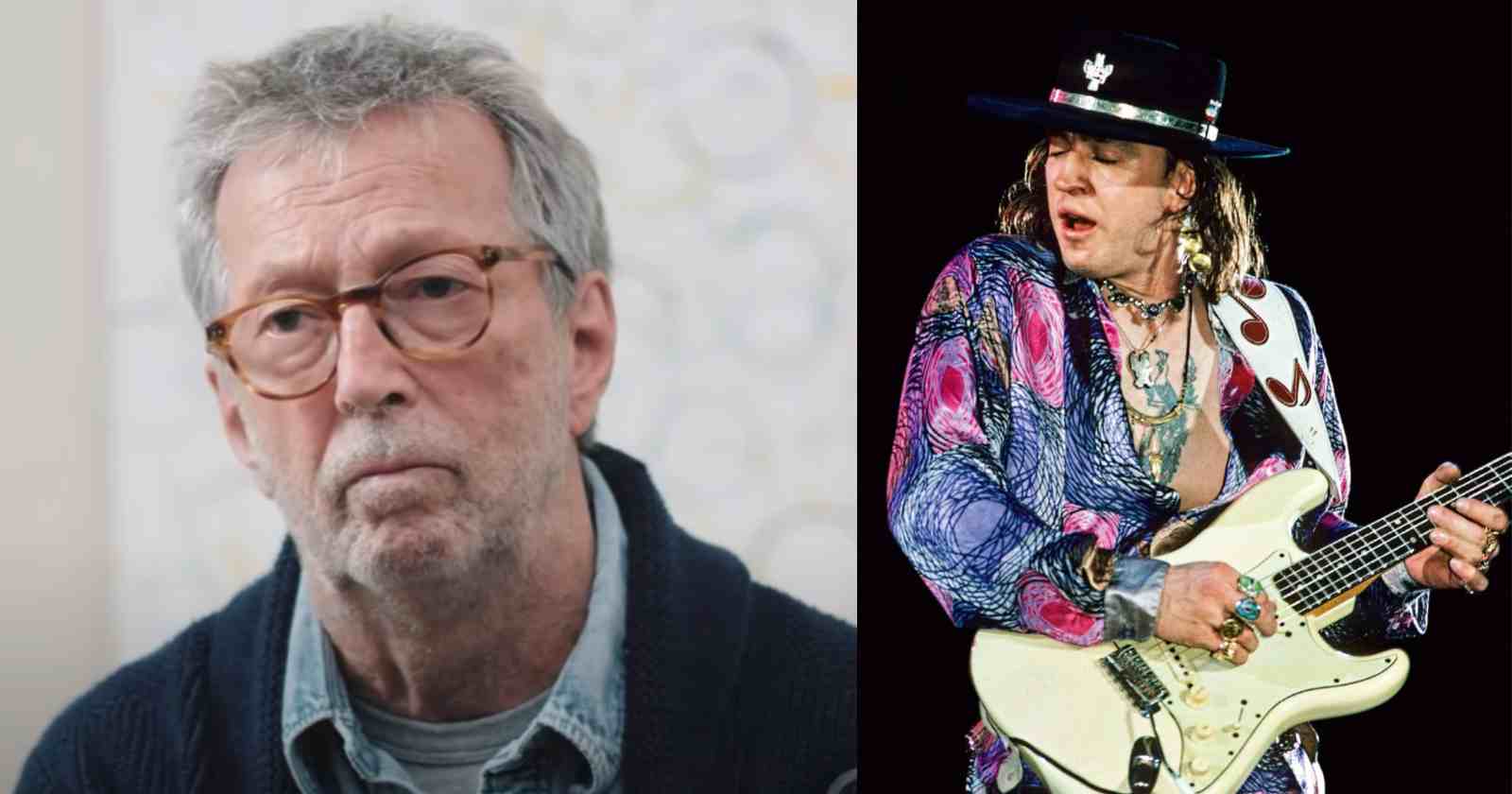 The legendary guitarist Stevie Ray Vaughan tragically died at the age of 35 back in August 27, 1990 when a helicopter he was in crashed. Originally, Eric Clapton would be in the helicopter, but he gave up traveling some time before.

In an interview for the film “A Tribute to Stevie Ray Vaughan” (Transcribed by Rock and Roll Garage), Eric Clapton talked about the late guitarist and his unique style, that impressed him since the first time he ever heard him.

“I was in my car and I remember thinking ‘I have to find out before the day is over who that guitar player is. That doesn’t happen to me very often. About three or four times in my life I felt that way in a car listening to the radio where I’ve stopped the car, pulled over and listened and thought ‘I’ve got to find out before the end day’. Not sooner or later, but ‘I have to know now who that is’. I remember being fascinated by the fact that he never ever seemed to be lost in any way.”

“It wasn’t ever that he took a breather or paused to think where he was going to go next. It just flowed out of him. Always seemed to flow out of him and actually even that doesn’t come just with virtuosity, practice or any of those. It’s not a question of doing it over and over again or anything like that. It’s just that he seemed to be an open channel. He just flowed throught him, he never ever seemed to kind of dry up.”

“Because when I play, I sometimes stop. Every now and then I just stop and think ‘what I’m going to do know’. I don’t want to repeat myself so I get caught up somehow. You freeze and most players do, I never saw him do that. So he was channel in some way.”

“I saw him play in London one time. So I sat about six rows back at the Hammersmith Odeon and for about the first 10 minutes I though I wasn’t going to be able to take it because it was so loud. I thought ‘I can’t take this’ and actually got used to it. Within 20 minutes after after that I was used to it and it was right, it got me, become all right.”

“At the same time was kind of like that thing I had to surrender to it completly and in a way. When we were in Alpine Valley I couldn’t let myself do that. I had to put up a bit of resistence in order to keep my own kind of self-esteem up. Because I wouldn’t been able to go on otherwise. I’m not joking. To been up to completly absorbed by what he was doing, I would have thought “what’s the point?’ And done kind of done a runner and I cleared off, run away”.

How he reacted when SRV died

In an interview with Rolling Stone in 1991, one year after the tragic death of Stevie Ray Vaughan, Eric Clapton said that he reacted to SRV’s death like he reacted to his son tragic death, saying: “[I reacted] Much in the same way as I did to my son’s. I mean, there were more people involved, and the death of my son was a directly personal situation.”

“There was a convoy of helicopters, about five of them, and they had to go back through this very thick fog up to about 100 feet above the ground. And once we came out of that, we just took off for Chicago. When I got back, I went straight to bed. And I was woken about seven in the morning by my manager, Roger Forrester, saying that the helicopter with Stevie Ray and our chaps hadn’t come back. And then a bit later, someone discovered the wreckage. That was it.”

He then formed his own group Triple Threat Revue, but he renamed them Double Trouble after hiring drummer Chris Layton and bassist Tommy Shannon. He gained fame after his performance at the Montreux Jazz Festival in 1982. His debut studio album Texas Flood charted at number 38 in 1983. It was a commercially successful release that sold over half a million copies. Vaughan headlined concert tours with Jeff Beck in 1989 and Joe Cocker in 1990.

Stevie Ray Vaughan & Double Trouble were inducted into the Rock and Roll Hall of Fame in 2015. Guitarist John Mayer, responsible for the induction, said in his speech: “Stevie Ray Vaughan is the ultimate guitar hero”.