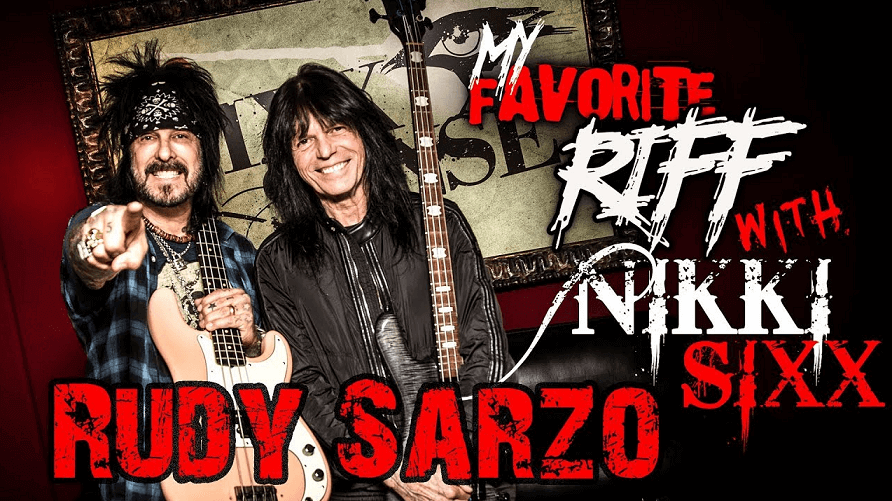 The legendary bass player Rudy Sarzo, that has been on bands like Quiet Riot, Whitesnake, Ozzy Osbourne, Dio, Blue Oystër Cult and many more was the guest on “My Favorite Riff” series presented by Motlëy Crüe’s Nikki Sixx.

They talked about metal riffs, finger picking and why they call each other “78”.

Sarzo joined Quiet Riot in December 1978 and remained in the band until early 1981. Though he is pictured on the cover of the band’s 1978 album Quiet Riot II, he does not perform on it.

In 1980, he replaced Felix Robinson in Angel until their break-up in 1981. He did not appear on any material recorded by the band.

From March 1981 to September 1982, Sarzo rose to fame as the bassist in ex-Black Sabbath vocalist Ozzy Osbourne’s band. He was recruited on the recommendation of Osbourne’s guitarist Randy Rhoads, who had previously played with Sarzo in Quiet Riot. Sarzo’s playing can be heard on Osbourne’s Speak of the Devil and Tribute live albums, though he never appeared on a studio album with Osbourne. The liner notes of Osbourne’s 1981 studio album Diary of a Madman list Sarzo as the bassist, though Bob Daisley actually played bass on the recordings.

Following Rhoads’ death in a plane crash in 1982, Sarzo became disillusioned and left Osbourne’s band. He rejoined Quiet Riot in the midst of the recording of Metal Health, which would go on to become a multi-platinum hit. Contrary to popular belief, the famed Bass Guitar solo in the hit song, “Metal Health” was not recorded by Sarzo but by bassist Chuck Wright.

After Sarzo had left Osbourne’s band, a serious rift developed between the two, primarily the result of Quiet Riot vocalist Kevin DuBrow’s persistent criticism of Osbourne’s vocal abilities in the heavy metal press. Sarzo was a member of Quiet Riot during the peak of the band’s success, and he appeared in numerous MTV videos and was voted 1983’s Top Bassist by the readers of Circus magazine. Sarzo remained with Quiet Riot from September 1982 to January 1985, when friction between himself and vocalist Kevin DuBrow convinced him to leave the band.

After leaving Quiet Riot, Sarzo formed M.A.R.S. with former Ozzy Osbourne bandmate Tommy Aldridge, who Sarzo maintained a close friendship with. From April 1987 to September 1994, both Sarzo and Aldridge were members of Whitesnake before lead singer David Coverdale put the band on indefinite hiatus.