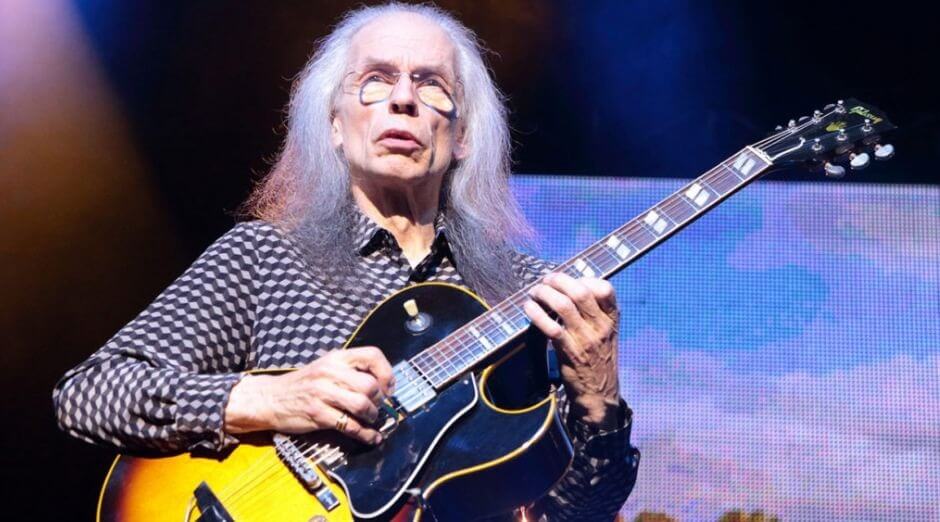 Steve Howe is one of the most talented progressive rock musicians of all time. He is best known for his work with YES, Asia and GTR. However, he also played with Lou Reed, Queen, Bee Gees and more. The guitarist talked with Rolling Stone about 10 famous songs he recorded outside YES.

I formed that group with the bass player, Kevin Driscoll. His mother was very bullheaded and determined. She went up to [producer] Joe Meek’s office in Holloway, London, where I was born, and said, “I want you to see my son’s band.”

For some reason, he did. We’d been on the circuit playing pubs. We had “Maybelline” and we played loads of other Chuck Berry songs. We passed the audition and went back there a couple of weeks later. It was my first ever recording session. I didn’t know what to expect, but we stylized the arrangement with lots of bass drum and low end. We kept the track without the guitar break and then overdubbed that on later. We put lots of spins on it. There’s a bit of Chet Atkins on there, but with Chuck’s general approach.”

We got on really well with Joe, maybe a bit too well at times. He used to come onto me. He was more trouble on the follow-up records that were licensed to EMI. And, of course, he never paid anybody. Nobody ever got royalties. I guess he thought he was the genius of the thing and he’d keep all the royalties. Of course, we were supposed to get paid. I don’t think we ever did, hence EMI returned the tapes to me, being the only real long-term performer in that group. But that song was a big moment for me. First recording. I was 17,” Steve Howe said.

Lou Reed “Ride Into the Sun”

“I remember very, very little about this. Yes was recording at Morgan Studios at the time. It was a brand new 24-track studio and, of course, it was always a hubbub of activity since there were other studios. Rick [Wakeman] and I just got invited to go play. I must say, from memory, what happened is we walked just to see and Lou was like, “We’re going to play you these three or four songs and then we’re going to go play them. Alright?”

“They were clear enough demos to grasp the structure and things. Basically, we went out there and it was the old recording method where everybody played at once. My guitars were across the road, so I plugged in and it was an interesting day’s work. It didn’t have any follow-up. It was just a one-off, which was great. Lou was quite charming and he knew what he was doing.”

“This is from my first solo album, Beginnings, and I was excited to be in full control. Singing lead was fairly scary, though. I took it on. Some of it is good. Some of it is not so good and a lot is mixed. Over the years, I’ve learned a lot more about my range and in the Eighties I learned to sing properly.”

“That song epitomizes the whole album. I was taking on a lot, including the bass playing as well, which I loved. Part of it was taken from a poem by Alice Meynell. She wrote the middle eight, the “Doors of Sleep” part. Because I wanted to call it that, they wanted most of the songwriting. I should have changed the title. [Laughs] She didn’t write any of the music or any of the other lyrics, but the publisher was very hard-nosed and I had to part with a considerable amount of the songwriting just because I used the title and that part of the middle eight. I’m not one to regret things, but you wonder sometimes.”

Asia “Heat of the Moment”

“I introduced [King Crimson bassist-singer] John [Wetton] to [Buggles and Yes keyboardist] Geoff [Downes] back when we started Asia. I said that we needed Geoff in the band, but [ELP drummer] Carl [Palmer] and John were quite adamant that we were a guitar trio. So I made it happen, though. Anyway, Geoff and John teamed up well as songwriters. Basically, they came in one day and said, “We have a song here.” All the other songs for the record were done by that point.”

“We listened to it and went, “Well, this is good. This is really hot.” It gave us renewed enthusiasm since we had new material right near the end of our work that elevated our feelings and beliefs about where we were going. This was cited as the first single. It was immediately obvious that it was a decent song and had a good attitude about it. I tracked up all these guitars through different amps while I was doing it, so there’s masses of guitars overlaid on the power chord stuff. That was a Gibson Les Paul, but in the choruses I’m playing a Telecaster.”

“Basically, I got a nice chance to do some things there that I hadn’t really done before. This was a power rock song. Everything I did that wasn’t like Yes, I was more sure it was the right thing to do. I had 10 years of doing Yes. I didn’t want Asia to be too much like Yes, and this was obviously not Yes. [Laughs] But I was happy with that.”

“But oddly enough, it became like Yes. [Laughs] It was part of the style that Yes took when they made “Owner of a Lonely Heart,” which was quite different than what Yes is known for,” Steve Howe said.

Frankie Goes to Hollywood “Welcome to the Pleasuredome”

“It’s always nice when you have a relationship with people. Even if it doesn’t go on and on and on, you find other ways of working together. That happened with Trevor Horn [who briefly fronted Yes in 1980 for the Drama album and tour]. I became one of his “call to get a guitar” guys. He’d call me up and be like, “Steve, would you fancy playing on this?” Basically, doing that track on the Frankie album was just an afternoon. I brought the dobro and it kind of worked. I was really just a bit of color, some extra texture that wasn’t expected on a Frankie record.”

“What a great album. Trevor put so much into those recordings. I did go on later to play on their second record, Liverpool, as well. So I was the go-to guitarist at times for Trevor and I was delighted to do that. There was such a nice vibe around doing things with Trevor and his team. It was all very high-tech.”

“I was making the GTR record at the time and I took a lot of reference from where Trevor was going. It wasn’t anywhere Geoff [Downes] was going [when he produced the GTR record]. They were two different places. GTR was going very stadium rock, but Trevor was picking up on the new Eighties sound, which he helped develop and I was hot to trot on. For me, it was a piece of frivolous fun.”

GTR “When the Heart Rules the Mind”

“I don’t like exaggeration, but I think [former Genesis guitarist] Steve [Hackett] and I spent six months writing the GTR record together. At the least, it was many, many months. We wrote the album and also formed the band towards the end of that period. We got all the material. It was rehearsed. People knew what they were doing. We had a pretty good band. There was a lot of fun going on. There were some riotous moments of good-spirited humor in the studio. Obviously, [singer] Max [Bacon] and [bassist] Phil [Spalding] were a rambunctious couple of guys who were always good for a laugh.”

“Steve was a little more serious. He had been used to running his own band with a bit more of a tight fist. I’d been used to being in a band where everyone was kind of on the same level. That may have caused later problems, but at that point we were flying with it,” Steve Howe said.

“When we recorded “When the Heart Rules the Mind,” we thought it was going to be the main song. We could sense it with the structures and choruses. The production got quite elaborate. There’s backwards guitars and different moods in the song. There’s an awful lot of the Roland synth guitar and a lot of color on the track and singing and choruses. It’s like we were building a track that had everything.”

“We had a lot on offer though. In my ears, though, it was over-produced. It had way too much. Strangely enough, when we presented it to Arista … [uncontrollable, wheezing laughter] they actually wanted more reverb. I’m getting slightly hysterical here because it was so funny. When I heard that on this track and that track they want more reverb, I don’t think I was happy. It was ridiculous. There were about 10 reverb units on every song. [Laughs] Every instrument was assigned to different reverb. It had tons of reverb.”

“But that was a joyous time. At that point, GTR were feeling a bit Asia-esque. We were confident and it seemed to be a match made in … at least somewhere near heaven. It was a very powerful time.”

“I was moving around Switzerland at the time, doing some recording. I had some days off and I went to Montreux because of the memories of [the Yes album] Going for the One being made there. So I was in a restaurant that was slightly below the ground. A guy walks by that goes, “Steve!” And I look up and it was a Queen crew member that used to be a Yes crew member. I think his name was Martin. He said, “Do the guys know you’re here? Can you come down to say hello?”

“I finished my lunch and went down there and it was a setup job. I walked in and we chatted a bit and they said, “We want to play you the album.” I was like, “I’ve got loads of time. Play me the album.”

“They play the album, but they save “Innuendo” for last. When it finishes they go, “Do you think you could add some guitar to that?” I said, “I don’t think you need any. There are some great parts there.” They said, “No, no, no. We want something more.” I said, “I’ll give it a run,” Steve Howe said.