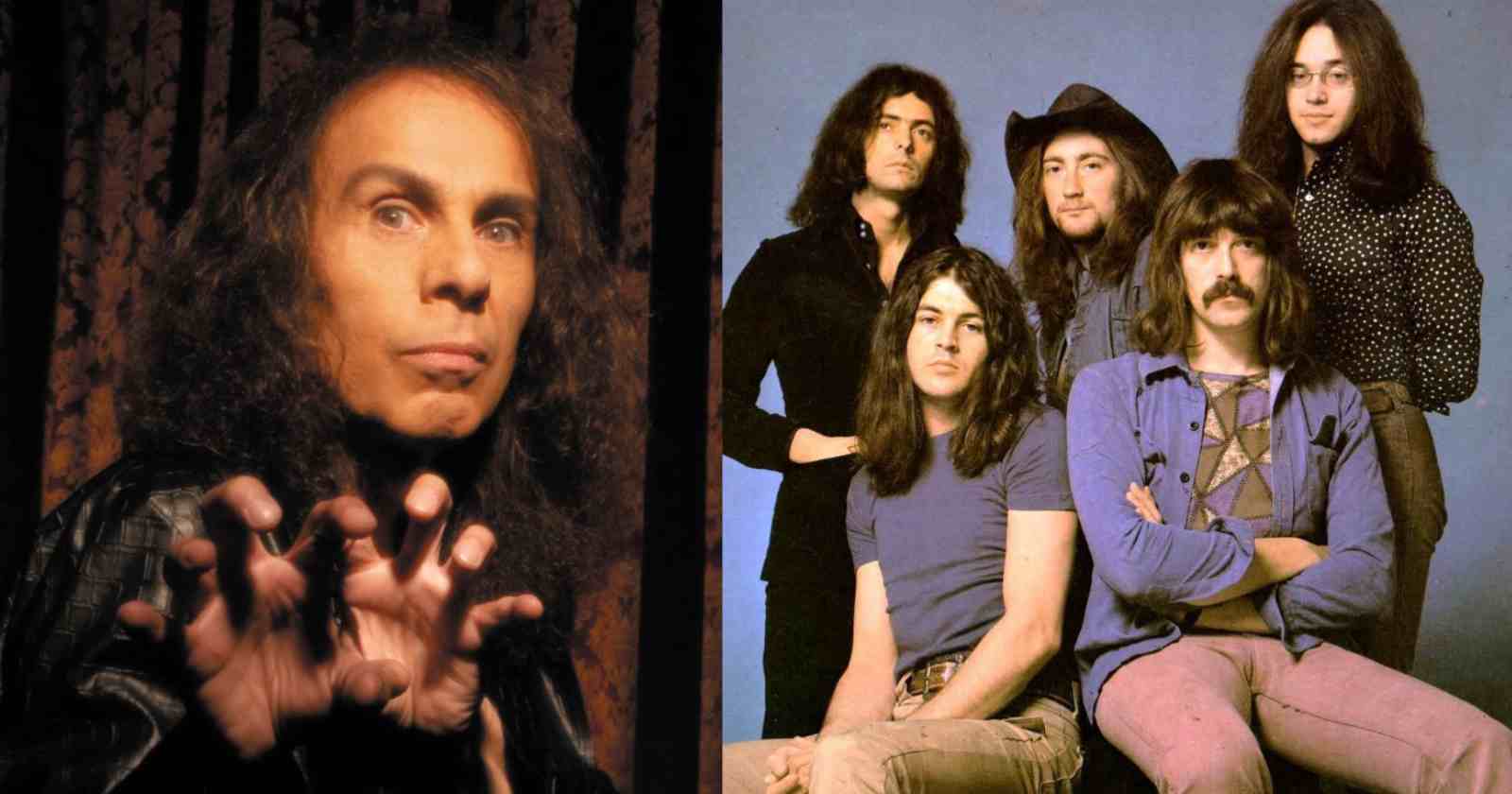 The vocalists Ronnie James Dio and Ian Gillan have one thing in common besides being two of the greatest frontmans in the history of Rock music, both worked with the legendary guitarist Ritchie Blackmore and curiously, their relantionship with the musician didn’t end up so well most of the times. Ian Gillan was his bandmate from 1969 to 1973 and in the 80s and 90s. As for Ronnie James Dio, he fronted Blackmore’s band Rainbow from 1975 to 1979.

Dio died at the age of 67 back in 2010, victim of cancer but over the decades of his career he gave his opinion on many other praised singers, including Ian Gillan.

Curiously, in the early days of ELF, the band that Dio was part of, performed many Deep Purple songs live in concert. But the first connection between the singer and Deep Purple happened in the early 70s when his band ELF was auditioning for the famous record executive and producer Clive Davis in New York and Deep Purple was also in town.

Bassist Roger Glover and drummer Ian Paice decided to go to the audition with Davis and ended up seeing ELF’s performance. Both musicians loved Dio’s band and ended up producing their self-titled debut album in 1972. Glover still produced their two last records: “Carolina County Ball” (1974) and “Trying to Burn the Sun” (1975). Dio also sang on 3 tracks of the Roger Glover solo concept album “The Butterfly Ball and the Grasshopper’s Feast” released in 1974.

But still in 1972, Deep Purple took Elf on tour as their opening act in the United Kingdom and United States. That tour was very important for Dio, since it was during shows that Ritchie Blackmore noticed him and invited the singer to be part of Rainbow a few years later.

The American singer said many times that the two bands that influenced him the most were Deep Purple and Led Zeppelin. He also admired Ian Gillan a lot and even mentioned one track from the band when he was asked which were some of his favorite songs of all time.

Talking with Rhapsody Blog in 2009, he chose “Smoke On The Water” from Machine Head (1972) as a favorite. “One of the greatest songs of all time. Of course, I played with Ritchie Blackmore for a long time. (Also) all the guys in Purple have been my good friends for 35 years now.”

“That record was produced by the bass player, Roger Glover, and the drummer, Ian Paice. Ritchie wrote a riff that we can all play — so simple. But it is a magnificent riff. I just think it’s one of the ultimate classic songs of all time. When I hear it, I hark back to that time in my life. It’s important to me,” Ronnie James Dio said.

In an interview recovered by Planet Rock Radio in 2020 (Transcribed by Rock and Roll Garage), Dio mentioned the same Deep Purple song as one of his favorites. “I didn’t want to put ‘Smoke on the Water’ down because everybody puts that down. But you know, my heroes were Ritchie (Blackmore), I didn’t know Roger (Glover), I didn’t know Ian. They were kind of subliminal parts to all that.”

“I knew of course of Ritchie and of Jon (Lord), who were the really the movers and shakers of that band at that time. Ian (Gillan) was a great singer. I didn’t aspire to be Ian, he had this voice that was unto only himself. I didn’t think I could do that one,” Ronnie James Dio said.

Dio performed with Deep Purple and an orchestra

Besides being a great friend of most part of the band members, Dio also peformed on some occasions with the group. In 1999 he was part of the show that Deep Purple made with the London Symphony Orchestra. One of the songs he performed was the classic “Smoke On The Water”.

He also played some shows with them in 2001 when they toured with an orchestra but playing material from their solo careers and Roger Glover invited Dio to perform some tracks from his 1974 solo album “The Butterfly Ball and the Grasshopper’s Feast” that Dio had originally been part of.

The legendary Deep Purple vocalist Ian Gillan is also a big fan of Ronnie James Dio and lamented his passing in a official statement in 2010, praising his voice and humour. “My dear friend Ronnie, departed but not gone. Resting peacefully (for a while) but never forgotten. I’ve had a sackful of mail since your passing; a sharing of grief and sorrow. We all remember your huge voice, of course. My ears are still ringing. Your wicked humour and sense of decency. The utter professionalism and personality that inspired so much respect from your friends in music.”

“The list goes on but the quality that stands out above all others is your enduring generosity. The one thing that we all treasure, the gift you gave us was your kindness. We all agree you were the kindest man we ever knew. Catch up later, mate,” Ian Gillan said.

Funny stories on the road with Dio

More recently in 2021, talking with Tales From the Road he said that he and Dio were very close and recalled some funny stories on the road with the late singer. “We were close. We were very close. It was Ronnie Dio, and (Scorpions) Klaus Meine, and myself. We were on a tour together. Of course, as you probably know, Klaus and Ronnie are diminutive figures. They’re not very tall, and I’m just over six foot (183 cm). So, we had a photograph taken together, with me in the middle and the two little ones on either side of me.”

“And it was hilarious. We got the picture pinned up in the dressing room. It was called ‘the three fivers,’ as opposed to ‘the three tenners’. It’s an English joke. So yeah, it was Ronnie, when I was buying some socks in Munich airport, we were on the same charter plane together. Ronnie was opening for Deep Purple, I think.”

“I was in the shop, going, ‘I’ve gotta buy some socks.’ So they had packs of three pairs of socks hanging on the rack. I was just looking through them, seeing which ones I want… Ronnie’s head appeared through the socks, and he said, ‘Ah, socks, drugs and rock ‘n’ roll!’ [Laughs]. Yeah, we were great, lovely mates. We were good mates,” Ian Gillan said.